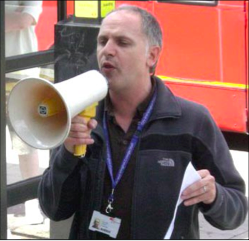 The Fight of our Lives – Defend Education

The Adult and Further Education sector is facing tough times. The Tory-led Coalition’s austerity measures have led to our jobs, pensions and wages being attacked.

At the same time as employers and government ask us to tighten our belts principals’ pay has risen to at least 4-5 times greater than that of a main grade lecturer, more billionaires are created daily and bankers bonuses spiral upwards.

Our students too are under attack; one in five 16-25 year olds are unemployed, the EMA cut has led to over 60,000 students not being able to attend Further or Adult Education and university fees raised to £9,000 is pricing working class people out of Higher Education.

I have been honoured to represent London and East region on the NEC for the last five years. In that time I have played a part in fighting to build action that has managed to stop compulsory redundancies, defend educational provision like ESOL and taken numerous initiatives putting forward alternatives to market driven education.

At the moment the fight to defend our pensions is the one that has taken centre stage and has managed to unite millions of public sector workers. I believe that we need to escalate this action as quickly as possible if we are to win.

The battle over pensions acts as a lightning conductor for all the other issues that we are concerned about.

If re-elected I will campaign for:

I teach GCSE English at City and Islington College. I am the author of A Manifesto for Further Education; Further and Adult Education: responding to a new social and economic climate, of Don’t get young in the third Millennium, Capitalism and the demonising of the young working class and of Defending the Welfare State – the case for public services for all