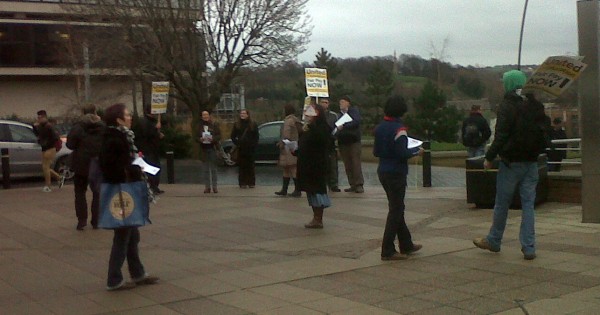 This was essentially a report of the ballot outcomes and what was being done to organise for the strike on 3rd December. In the discussion which followed a number of members reported on the generally positive mood in branches about the impact of the last HE strike and on recruitment to the union. Plans for various rallies and teach outs were reported.

It was agreed following a proposal by UCU left supporters that messages of support would be sent to the various student occupations happening (such as Sussex, UoL and others) in support of the university staff campaign for decent pay n the run up to the strike on 3rd December.

A number of UCU Left supporters emphasised the need for continued action, both strikes and other action, escalation of the action, and the need to ensure that a marking boycott in HE is applied early as per the agreed programme of action.

Speakers from FE also spoke about the build up to FE involvement in the next strike on 3rd December and emphasised the positive impact of joint action with other unions (and involving both sectors of UCU) where it was possible to organise this.

It was suggested that UCU could take a lead in approaching other unions who have live action ballots to propose taking action during a week of strike action alongside teacher unions, firefighters and others. This would be a very positive way in which a number of unions could unite and coordinate resistance to the attacks on education and other parts of the public sector.

A new figure for national membership was reported to NEC which was described as the ‘lowest point since merger’. However, on questioning, it was clear that a substantial part of the apparent drop in figures was due to a major data cleansing exercise. Well-founded rumour has it that this had wiped around three and a half thousand members off the lists, so in fact the actual figure would have been around 116,500 members, which included, in fact, a small rise in HE membership of 1.5 percent in the year to 31st October 2013. This was no doubt at least partly due to the industrial action being pursued in HE.

In FE there had been a loss in the same period of 5.2% due to continuing fairly high levels of redundancies and retirements. It remains to be seen what impact the run up to the strike on 3rd December might have.

The National Recruitment Campaign continues to deliver successes but it remains very important to encourage the development of a culture of recruitment in the colleges and university branches in the coming period.

It was reported that the union’s finances are back on track following the decisions made at Congress this year. You will remember that Congress delegates rejected the plan on subs and cuts proposed by the Senior Management Team in favour of the alternative proposed by several NEC members. The planned reduction of staffing numbers in the union had already been implemented prior to Congress and there has been a staffing reduction of 27 posts.

Regarding the re-structuring of the various departments at Head Office and the reorganisation of regional staffing, agreement had been reached with the staff union, UNITE. Details of the new roles and responsibilities were scant in the report to the NEC.

Concerns have been expressed about the potential impact of these staffing cuts on support for members, particularly at regional level, but NEC was assured that the regional offices will continue to be fully operational for members. Time will tell.

HEC passed a motion committing UCU to organising a lobby of parliament coinciding with the second reading of the Private Members Bill (sponsored by Andy Sawford) to prohibit the use of zero hours employment contracts. This is likely to be in January.

The bill aims to end the scandal of employers requiring workers to be available for work but where there is no guarantee of work available. Recent research has found that 61% of further education colleges have teaching staff on zero-hour contracts and 53% of UK universities use them. Several years ago UCU was at the forefront of a successful battle to scrap waiver clauses in fixed term contracts which required workers to waive their employment rights. We can play a similar role in consigning zero hour contracts to the dustbin of employer abuses.

The NEC agreed, by quite small majorities in some cases, Revised Model Local Rules and Revised Regional Committee Standing Orders despite opposition which forced the decision to the vote. Some of these changes will make it harder for branches to hold quorate branch meetings and will tend to institutionalise branch e-ballots, a far less democratic way of making and ratifying decisions than open debate and decision making in meetings.

The Chair originally proposed no debate arguing that these items had been debated at previous NEC meetings and meetings of ROCC (Recruitment, Organising & Campaigning Committee). A simple vote was taken indicating that many members just wanted to push the items through with no debate but after much argument (with comments from some NEC members begging the question as to why they are NEC members and do they believe in the democratic process) the Chair did a U turn and allowed a limited debate with 2 speakers for and 2 against with those who had proposed amendments using the opportunity to talk to their amendments in their speeches against.

Despite this the Local Rules and Regional Standing Orders were agreed although the separate debates about how and when they would be implemented exposed the absurdity of some of the proposals.

There is much wrong with the Local Rules but Branches can seek variations from the model text although the process for this has not been devised yet! There are also problems with the Regional Committee Standing Orders but again Regional Committees can propose local variations.

On several occasions the General Secretary and President reminded NEC members that further amendments could be proposed at a future date and it is quite likely that such amendments will be the subject of Congress motions in 2014.

It could therefore well be that Branches and Regional Committees will be in no hurry to go through the process of considering their local rules and standing orders particularly as the timescale for this process is confused and the mechanism for enforcement hardly a priority for over-stretched Regional Officials and National Officers trying to work in a revised but depleted UCU structure.

A motion to continue to allow an observer from the Anti Casualisation Committee to attend ROCC meetings was also defeated by the block vote of the Independent Broad Left despite cogent arguments from ACC reps that it should continue.

Due to the packed agenda and the time spent on earlier issues a number of the motions from members were not reached. However, a motion opposing the Transatlantic Trade and Investment Partnership was passed, as was a motion to affiliate to ShareAction

Similarly NEC agreed re-affiliation to the Stop the War Coalition and a statement of solidarity for Michael Chessum, President of the University of London, after his arrest for organising protests against the shutdown of the union.

While a motion from UCU Left supporters calling for support for UN Anti-Racism Day on 22nd March was not reached, it transpired that the union has already now signed up to this.

Similarly, a call for a donation to support the documentary ‘Still the Enemy Within’ for the 30th anniversary of the Miners’ Strike, while not reached on the agenda, was already being supported by a donation of £500 from the union centrally.