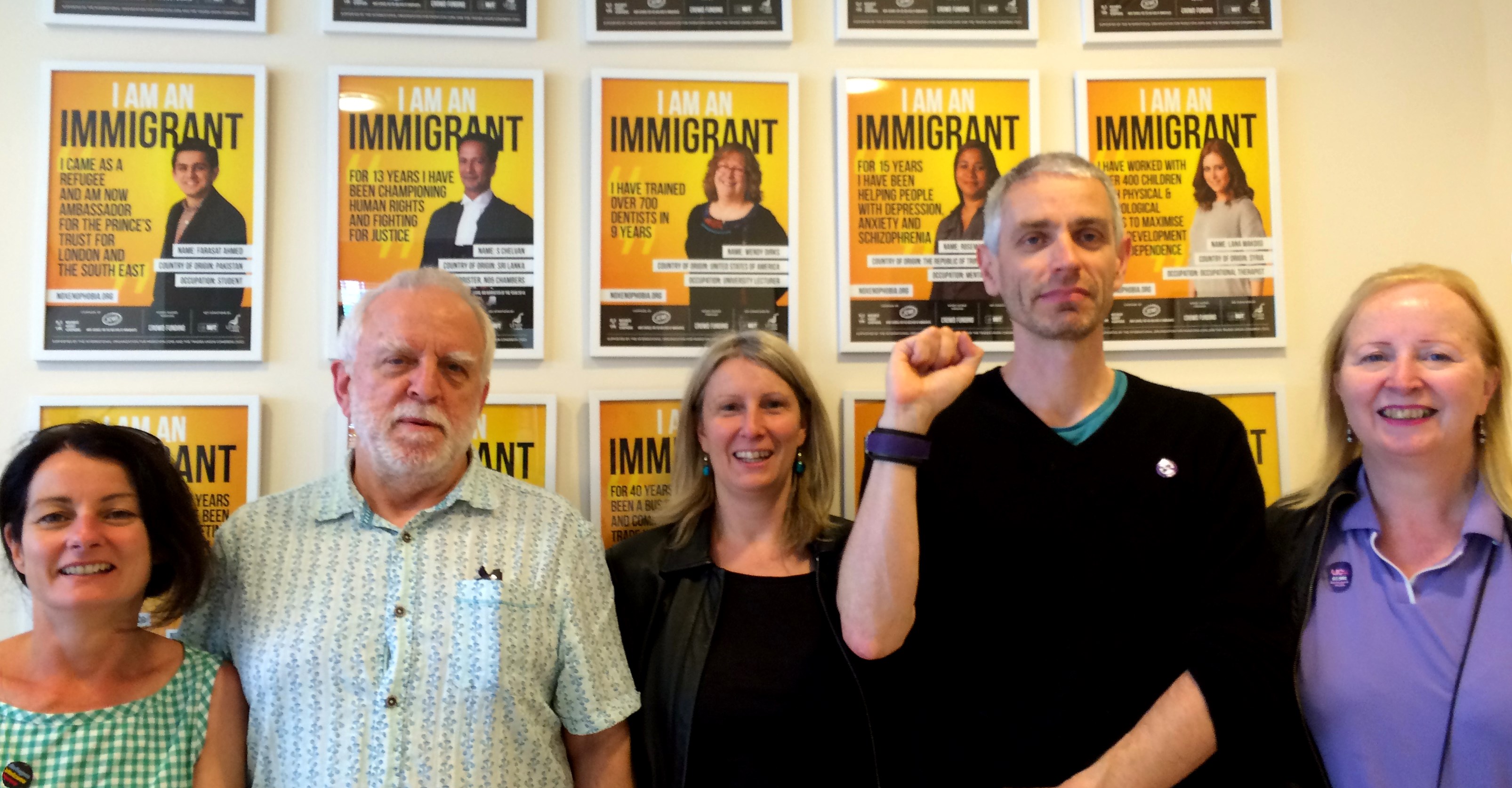 The first meeting of the new NEC was framed by the political tumult arising in wake of the EU referendum result. Following a disgraceful campaign on both the Leave and Remain sides, which blurred the lines between legitimate discussion of how we organise our economy and society and the use of fear-mongering and anti-immigrant racism, many people in Britain will rightly feel concerned about what happens next.

We cannot allow this result to be delivered into the hands of the far right, UKIP and right-wing extremists.  We need a careful and measured analysis of this vote.  Voters may have supported the leave position for a range of reasons.  Some of the leave vote was a protest against austerity and negative consequences of globalisation.  We need to recognise that some people voted to leave as a direct result of years of austerity and economic decline and as a vote against the establishment.  Some of the leave vote related to constitutional issues. Some of it was based on a belief that a vote to leave would end migration to the UK, conflating the issues of membership of the EU and of the single market. We condemn attacks on migrants in the wake of the leave vote. The UCU NEC has passed an important emergency motion that reflects these sentiments (see below).

The UCU and those of us on the Left now need to take the lead in shaping the aftermath of the fallout of this campaign. We need to make it clear that migrants are welcome and defend any attacks — literal or political — on migrants or on immigration.

We also need to defend institutions against any cuts that are justified by reductions in EU funding. There is no mandate coming out of this referendum for clamp down on immigration or for further austerity.

And it’s not Farage or the racists who will protect the NHS, defend education, build affordable public housing or protect our rights as workers. It is through organising in our trade unions and in our communities against cuts and closures.

It is in this light that July 5, when the NUT and some HEIs will be taking strike action over pay, is very important. It’s important as a way of showing the way forward after the referendum — to protect our living standards and stand up to attacks on education and austerity more generally.

UCU branches who are not striking should think about how they can deliver solidarity to the NUT and those UCU branches on strike. We should have migrants speaking on our platforms and make it clear that we welcome people, students, staff from other countries.

The Tories may well be in disarray over the referendum — and we welcome that — but we cannot relent on our work to organise against the government’s agenda to radically reshape education policy in the direction of privatisation. There are pay campaigns underway in both HE and FE and we must work to link these to the broader questions around funding of education and against privatisation.

This means continuing the excellent work that has already being done to publicise the Alternative White Paper in HE and to highlight the link between the Tories’ privatisation agenda, declining pay and increasing casualisation in HE.

In FE in London the pay campaign is being linked with a London-wide contract to be used around bargaining in light of the area reviews. London FE members should make sure they’ve discussed this in their branch and are ready to adopt it so we can return ready for a collective campaign in the Autumn.

The Area Reviews still represent a massive attack on FE and if implemented would affect the whole of post-16 education. Steering group meetings between the trade union side and the deputy FE commissioner are a shambles. No evidence or data is being supplied and it is clear that from the scramble for pre-area-review mergers that there is no genuine process taking place.

It will also be important for the union to develop responses to the government white papers on Education and on Skills. Battles are also underway against the deskilling of education through attacks teacher educators; in Scotland over governance and the Diamond Review in Wales is a potential threat to subsidies for Welsh students.

As an education union we should be at the forefront of defending refugees and opposing racism. We stand for safe and welcoming educational spaces and for education and learning as the solution to ignorance and hatred.

Congress attendees raised £1,600 for Care for Calais, which has been matched by the UCU. The UCU will be trying to maintain a presence in the Calais camp over summer. Ultimately this is a political project aimed at providing solidarity to the refugees and bringing their stories back to our work places and wider society.

We would like to provide as much support as possible to enable members to actively bring solidarity in following ways. If you’d like to help with providing a presence in Calais, please contact: Dave Muritu — dmuritu@hotmail.com

NEC voted that the two motions we take to TUC Congress will focus on:

In order to move forward on the issue of sexual harassment and make use of the report that UCU has produced on sexual harassment (attached), we will also look for the possibility of making amendments to other motions coming through.

We also passed a motion on TU Victimisation of UCU reps at City of Liverpool College. Please sign and circulate the petition: https://www.change.org/p/lucy-powell-luciana-berger-reinstate-victimised-ucu-branch-secretary-gary-duke

The UCU Left will be holding its conference in September this year. It will be a good opportunity for activists to share, should they still be ongoing. We will also need to discuss how UCU Left wish to participate in the General Secretary elections in 2017. Details to follow shortly.

The vote to leave the EU has created a political earthquake.

The referendum was marred by disgraceful racism and scaremongering over immigration by figures on both sides of the official campaigns and of course by the tragic death of Jo Cox MP.

However, millions of people have voted to leave the EU as a direct result of years of austerity and economic decline.

The UCU rejects any attempt to use the ‘Leave’ vote to impose further austerity measures.

Post 16 education is already under attack; we will fight any attempt at further cuts as a result of the referendum.