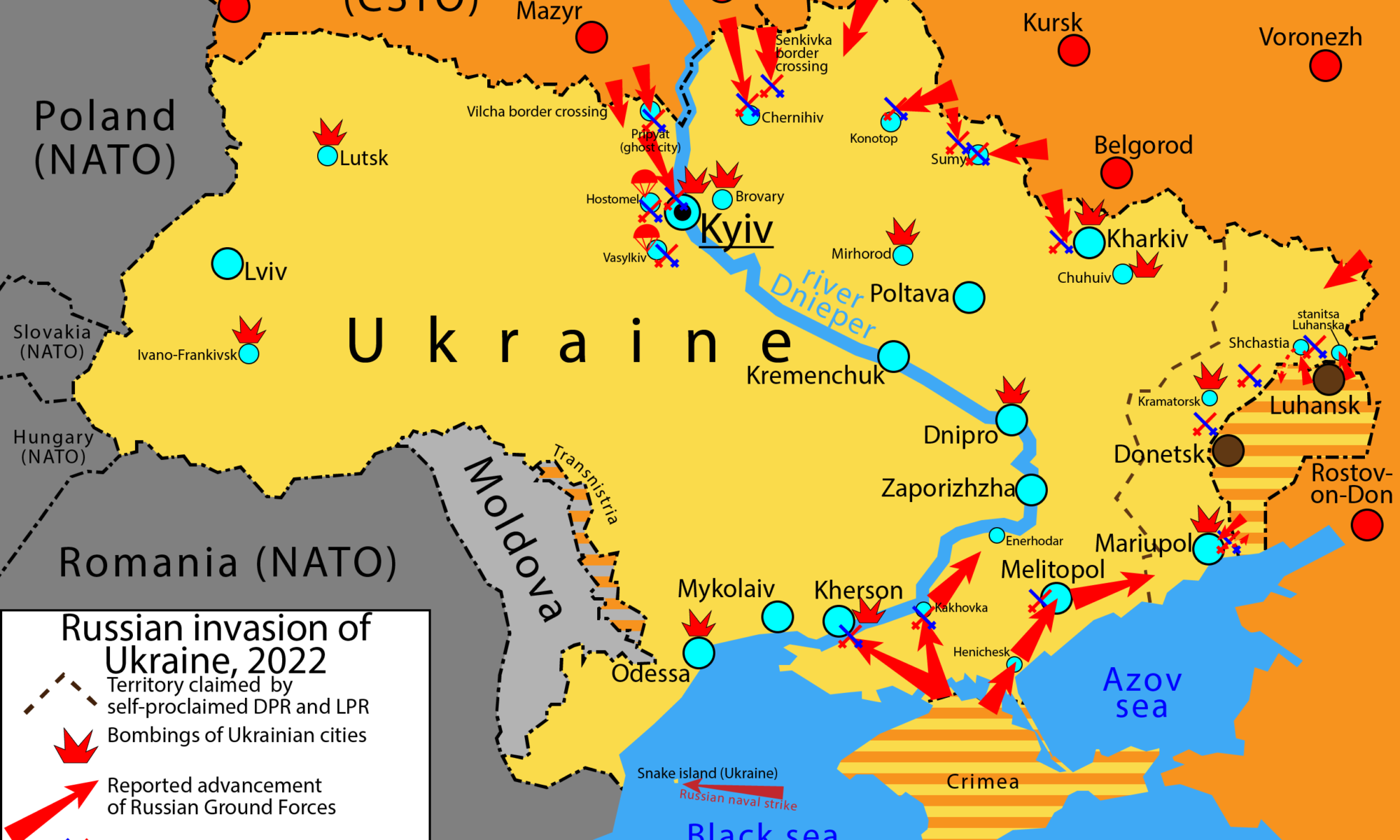 UCU Left would like to encourage supporters to express their opinions on how trade unionists should respond to the war in Ukraine. Sean Vernell, writing in a personal capacity, kicks off the discussion.

President Putin’s decision to send Russian troops into Ukraine after recognising two areas in Eastern Ukraine is a terrifying act of imperialist aggression. Images of ordinary people fleeing for their lives as bombs explode in their cities is a heart-breaking spectacle.

The announcement by Putin to put nuclear forces on alert is chilling and illustrates the danger to the world.

It should fill us with rage and motivate us to campaign to demand Russian troops be withdrawn and open our boarders to Ukrainian refugees.

But our rage should not stop there. We should also tell our leaders and their NATO allies to stop meddling in other countries affairs. The attempt by NATO and western leaders to portray this fight as one between democratic nations and tyrannies is wrong.

Of course, we have been here before. Blair and Bush tried to justify their wars in the middle east on the basis of the need to defeat Saddam Hussein – the ‘new Hitler’, to protect women’s rights in Afghanistan or the ‘humanitarian bombing’ of Kosovo – all in the name of freedom and democracy.

This war is not between mighty Russia and the Ukraine. Ukraine is a pawn in a much wider global military and economic rivalry between two different power blocks. On the one side stands Russia and China. On the other side the NATO forces, 30 nations including US and Britain.

NATO, set up during the cold war to pursue the interests of western powers in eastern Europe, ever since the fall of the Berlin wall has maneuvered to increase its spheres of influence in eastern Europe. The lucrative gas and oil fields are once again a key determining factor that motivates their operations.

Putin has made a brutal decision to challenge the West and the post-Cold War order, which has seen the West and NATO expand their influence Eastwards. His use of the Russian military to invade Ukraine is an attempt to discipline ‘near abroad’, to quieten domestic critics and make moves to restore Russia’s sphere of influence from the past.

Putin is a ruthless and an authoritarian leader who has more in common with Tsarism than he does with Lenin and Bolsheviks who set up the Baku conference in 1921 to recognise national independence.

Putin’s decision to enter the Ukraine is based upon an assessment that the US and NATO are weak and divided.  The key power, the US, is no longer the power it once was. The US’s recent defeat and withdrawal from Afghanistan is just the most recent example of this weakening power and influence in key regions of the world.

Britain no longer has an empire. But the Tory party believe that they still are an important world military power. The ridiculous rant made by defence secretary Ben Wallace to rally the troops about how the Scots guards ‘kicked Tsar Nicholas I’s arse’ in the Crimea in 1853 ‘and we will do it again’ is a reflection of how out of touch our political leaders are with reality.

European powers are increasingly divided over how best to maintain economic growth and stability as the rows over Brexit demonstrate.

Putin’s assessment of the weakness of his enemies has driven him to seize his moment. It is an attempt to finish the prolonged war of attrition between Russian and the West since the collapse of the USSR on his terms.

It is down to Russian workers to prevent Putin sending their sons and daughters to die on the battlefields of the Ukraine. The brave anti-war demonstrations that have taken place in 40 cities across Russia are ones that we must do all we can to support.

The response of our leaders to the Russian invasion of the Ukraine will fundamentally determine how far this crisis in the Ukraine will escalate and therefore how many lives are lost to maintain their power base within eastern Europe.

It is our responsibility to do all we can to prevent our government taking decisions that will lead to tens of thousands of ordinary working men and women to losing their lives, not for democracy or liberty but for gas lines and spheres of influences which enrich the lives of the already rich and powerful.

This is why, although not surprising, it is a disgrace that Sir Keir Stammer, the leader of the opposition, is attempting to out warmonger Johnson. It is quite pathetic to watch Starmer berate Johnson for not being more assertive in his actions against Russia.

A man who only a few years ago marched with us on the streets of London to oppose Bush and Blair’s wars in the middle east. Starmer is a pure opportunist. He has no principles. For him it’s all about getting elected. He believes that by trying to out warmonger Johnson he will win a few votes and demonstrate to the rich and powerful that he can be trusted more than Johnson to protect and run the British state and further NATO’s disastrous imperial strategy. Even if this means tens of thousands dying to do so.

Once again it will take working class solidarity to prevent the warmongers making our children pay for their greed.

One Reply to “No to war in Ukraine”