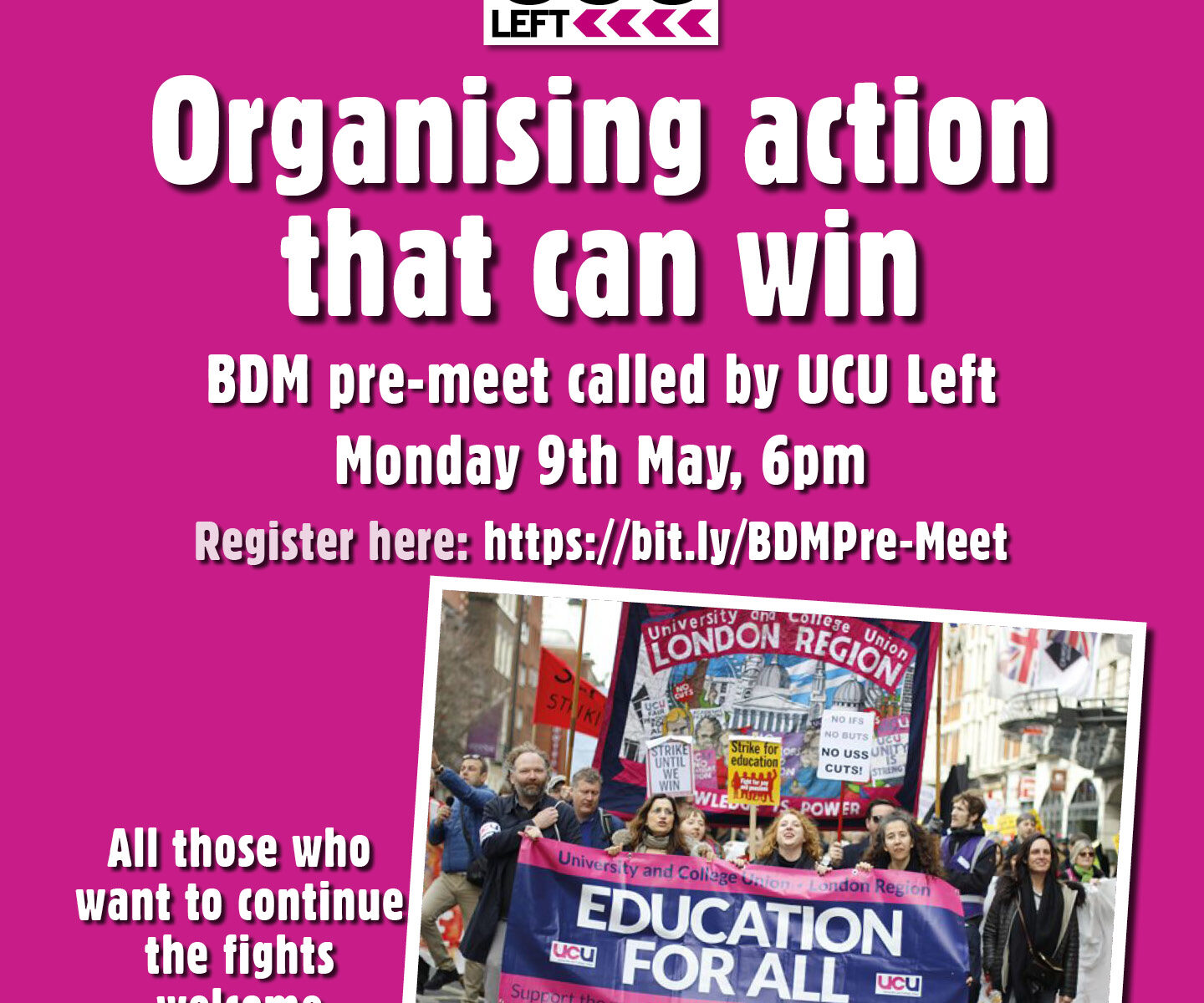 This is a hazardous moment in the Four Fights and USS disputes. There is a danger of our planned action for this term unravelling, leaving us with no plan for defending members from our employers’ attacks.

Very late on Friday we received confirmation that the marking and assessment boycott will start on 23rd May. But since delegates to the two special sector conferences voted for marking boycotts backed by strikes, the General Secretary has done everything possible to undermine the disputes.

The delay in issuing notifications has been very damaging. Every day until the boycott begins means more and more marking is completed, reducing the leverage we can exert over our employers. The excuses for the delay continue to pile up. They told us they had to wait for the results of the USS conference before implementing the results on Four Fights, even though they separated the decisions by holding two separate conferences, against the policy of keeping the disputes coupled. Then they told us that the workload involved is too high for UCU staff. If the union is understaffed, we should employ more staff and pay them properly.

The General Secretary now argues that the votes at the conferences were too close to mount an effective campaign, suggesting that the reasons for delay are not solely practical. But the votes were clear and decisive, especially given that the argument for action had to overcome the GS’s call for a pause in the run-up to the conferences.

What is she suggesting? That votes on industrial strategy need a two-thirds majority? Aren’t the hurdles imposed by the anti-union laws enough?

All of this demoralises members and increases the worries in branches about whether action can be successful. No advice has been issued from HQ on how to implement a marking and assessment boycott. No steps have been taken to implement the conference decision to raise funds from members in branches without a mandate to support the branches taking action. Worse, the GS’s supporters and their allies on NEC voted not to remove the cap on payments from the Fighting Fund.

Branches with a mandate are being forced to organise these things themselves by sharing experience on marking boycotts and initiating twinning arrangements. We want member control of our disputes, but we don’t want the leadership to wash its hands of us.

We are now told that Tuesday’s meeting is not a Branch Delegate Meeting but a ‘branch briefing’. Who is briefing whom? This should be an opportunity for branches to discuss how to implement the action and what we need from the General Secretary and HQ to support it. What we don’t need is to be told that the decisions we took at the sector conferences are wrong, invalid or can’t be implemented.

There is now an urgent need to change the narrative and the mood around these disputes. A properly supported marking and assessment boycott in 40 institutions can terrify bosses across the sector and relieve the pressure on Goldsmiths and Queen Mary, who are currently fighting isolated local battles. The threat of strikes can blunt the employers’ willingness to make punitive deductions. Wage-sharing and twinning of branches can reduce the effectiveness of main weapon against us.

It is no coincidence that UCEA raised their offer for 2022-23 to 3% on Thursday. It is still nowhere near enough, but it indicates that they want to sweeten the deal just enough to deter further disruption in the sector. And the rise in interest rates means, even on the corrupt valuation, that the USS scheme has moved back into surplus. This is not time to pull back from the fight.

UCU should call regional and national demonstrations to unite branches with and without mandates. The TUC demonstration against the cost of living crisis on 18 June will be an important moment. Our ability to beat the anti-union thresholds and fight back can give a lead to others in the movement, desperate to take on their own bosses and Johnson’s corrupt government.

Jo Grady was elected after the #NoCapitulation moment as an expression of members’ willingness to fight and their desire for democratic control of disputes. Members will not forgive a General Secretary who ignores their decisions and abandons the fight.