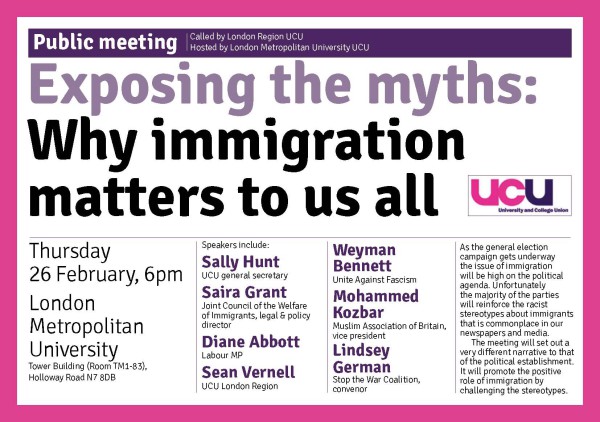 At the end of last year, London Region held a successful launch of the UCU/Centre for Labour And Social Studies pamphlet on why immigration benefits us all. London Region UCU are proud to announce that we will be following up this launch with a public meeting to address the issues surrounding the role of immigration.

Central to the General Election campaign will be the issue of immigration. Unfortunately many of those contesting the election will not be promoting its positive role in British society. This public meeting will counter popular racist myths.

Sally Hunt, General Secretary UCU: Sally will be countering the lies about the role of immigration outlined in a new UCU/CLASS pamphlet on immigration. Free hard copies will be available on the night.

Saira Grant, Legal and Policy Director, Joint Council of the Welfare of Immigrants: Saira will be promoting a new exciting campaign launched by the Movement against Xenophobia. The campaign, with the backing of the TUC, are launching a poster campaign around the theme of ‘I am an immigrant’.

Dianne Abbot MP: Dianne, one of the few black women MPs, will be highlighting the role of migrant workers and challenging the attempt, by political parties in the general election, to play the race card as well as putting forward ideas of how we can challenge these ideas.

Weyman Bennett, Joint National Secretary Unite Against Fascism: Weyman will be debunking the myths surrounding UKIP’s claim to be an anti-establishment party. He will demonstrate how UKIP are using racism to play on people’s insecurities about unemployment and housing. He will also look at the rise of far right movements in Europe to warn us about the dangers of not challenging the likes of Nigel Farage and his racist party.

Sean Vernell, London Region UCU: Sean will be emphasising the key role UCU, as an education union, can play in the defence of multiculturalism within Education.

Mohammed Kozbar, Iman for Finsbury Park Mosque and Vice President Muslim Association of Britain: In the aftermath of the Paris shootings Mohammed will be expressing the concerns and fears of the Muslim community in the face of the rise of Islamophobia.

Lindsey German, Convenor , Stop the War Coalition: Lindsey’s contribution will examine the impact of wars on the rise of the displacement of millions of people across the world and how these wars increase racism and Islamophobia.