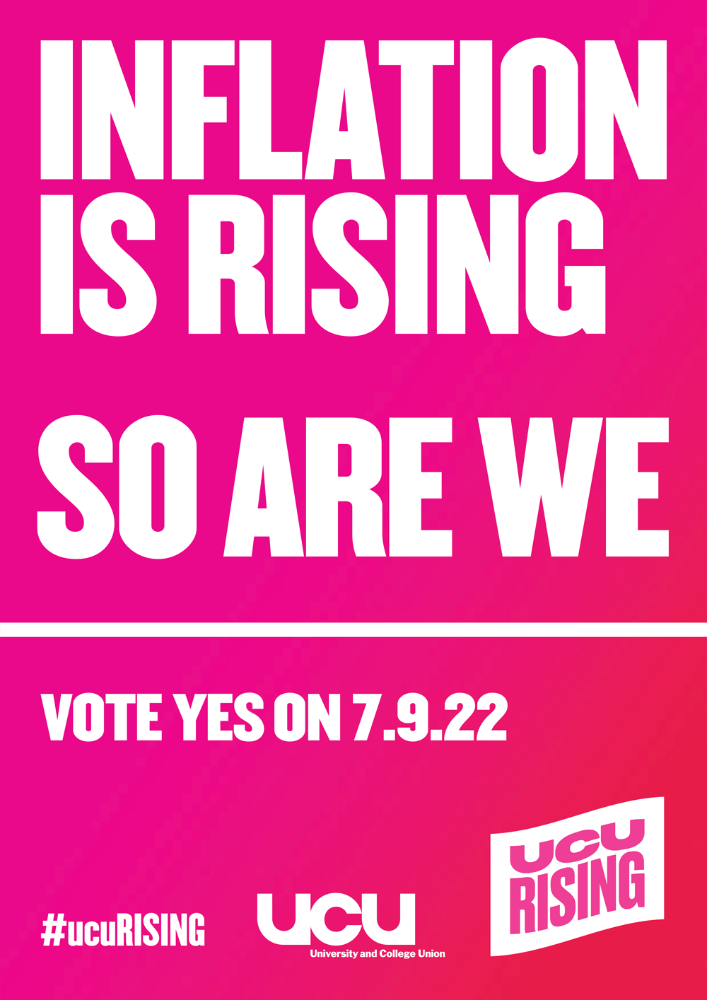 UCU’s Higher Education ballots are now open. We have seven weeks to achieve a huge vote for industrial action on a turnout which smashes through the turnout threshold.

There has never been a more important moment to organise a campaign for industrial action. The attacks on pay, pensions and working conditions in Higher Education now coincide with a general cost of living crisis which is trashing the living standards of millions of workers.

Exceeding the turnout threshold in aggregated ballots will not be easy. But factors exist which will encourage more members than ever to vote for action.

The first is the sheer scale of the erosion of our pay. The gap between pay awards and the rate of inflation is now huge and is compounded by the eye-watering hike to energy bills we are about to face. The value of university pay is now 25% less than it was 12 years ago, and with inflation in double-digits the illusion that moving up the incremental salary scale compensates for below inflation pay awards has been well and truly smashed.

The second factor is that this time we are part of a growing wave of industrial action by workers against the cost of living crisis. The list of other unions which have already embarked on action includes RMT, ASLEF, TSSA, CWU with a number of others moving to ballot to enter the fray.

Finally, it is welcome that the General Secretary has set aside her previous arguments against action this autumn and has decided to lead the UCURising campaign from the front. Up for re-election in 18 months, she has obviously grasped that members would not understand our union remaining on the sidelines during the biggest upsurge in trade union militancy for a generation.

With these things in our favour, we have a great chance to achieve a powerful mandate for action by every HE branch for the first time since the anti-union thresholds were imposed in 2017.

Nevertheless, complacency in the ballot campaign is a potential danger. Nationally organised Zoom rallies and a speaking tour by the General Secretary are extremely helpful in creating the climate for a successful ballot campaign, but they are the least we should expect from our national leadership. We know from experience that the job of getting the vote out is carried by activists in the branches. Although these are aggregated ballots, we will need to behave as though they are not and take responsibility for the result in our own institution. Branches which have learned how to do GTVO effectively must aim to beat the threshold by a considerable margin as well as twinning with places that have struggled in previous ballots to share expertise and resources.

The consequences of failure to win a mandate for action would be disastrous. It would mean that no UK-wide fight over pay, pensions, casualisation, equality or workloads this academic year. Our employers would take that as a green light to intensify their attacks in pursuit of their overriding project to reduce their spend on staffing so that they can concentrate on competing with each other in the HE marketplace.

Ballot is just the start

The ballot is therefore the immediate priority of every activist. But despite what the General Secretary has said, our employers will not be terrified into submission by strong ballot results alone. We are balloting in order to take action, so we also need to start debating the kind of action we need to win. Members need to be reassured that the mistakes of the past will not be repeated. If they suspect that the views of branch delegates will again be routinely ignored and that ineffective action will be called, it will be harder to persuade them to vote Yes in the ballot.

It is a step forward that Jo Grady is framing UCURising as a single campaign and appears to have abandoned her attempts to decouple the USS and Four Fights disputes. It is also positive that our campaign materials are drawing the links between our fights and those of the postal workers and others. It is right that we should aim to take coordinated action with other workers. This starts with ensuring that we are taking action alongside the 22 Unison HE branches that already have a mandate. But we must also push for maximum possible unity across the whole trade union movement. Our prospects of winning are tied to the outcomes of the disputes on the railways, post, telecoms and elsewhere.

However, if we limit ourselves to the kinds of action currently being taken by CWU and RMT we will not win. UCU has long since moved beyond one- and two-day token strikes. Our employers have a strategy of sitting out our longer bouts of action too. If we are serious about defending pensions and restoring the value of pay, we will have to cause more disruption in our institutions than ever before.

We need to deter the employers from sitting out our action and turn the anti-union laws to our advantage by always having further action announced. We need to learn from the way refuse workers kept their bosses guessing by notifying continuous action and then calling it off for particular days at short notice.

We need to seriously consider starting a marking and assessment boycott early in the campaign. Last summer’s action confirmed the effectiveness of this tactic, but it makes no sense to delay using it until most of the marking is already done.

Crucially, we need to ensure through open strike committees in every institution and Branch Delegate Meetings that UCU members are in control of their action and that the Higher Education Committee’s job is simply to sign it off, not water it down.

And, as terms begin, we must start to build support and solidarity from students on a scale bigger than we have achieved before. We cannot afford to allow university managements to turn students against us. Many students already understand all too well that they are being milked by a marketised system, so let’s make sure that students are ready to stand with us on every picket line.

The time to fight is now. Let’s smash this ballot and unite against this assault on living standards.