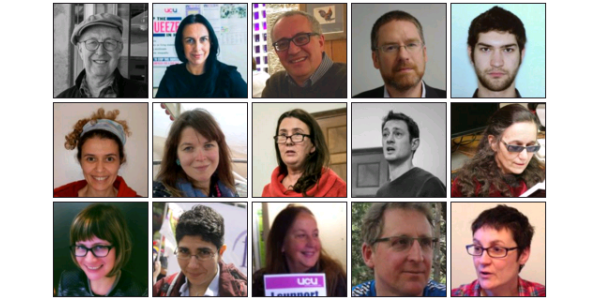 Post by Rhiannon Lockley who is standing for NEC Midlands FE, in response to Sally Hunts’s latest election email to all members:

I think Sally has a lot of strengths and has worked hard to lead our union but I want to respond to the issue she presents on independence and factional interest. I find it surprising for a candidate who refers to themself as independent to spend a section of their address attacking one out of two equally operational and weighted factions but not even mentioning the other by name.

Sally implies that the left is controlled by the SWP. Like our candidate for general secretary Jo McNeill and lots of UCU left members and supporters I know, I’m a Corbyn supporting Labour party member. It is this more than anything which made me want to respond, because I feel like myself and people like me are being painted as puppets. What is this meant to say? That we are too silly or powerless to have any input into decisions or even realise that other parties are present? Incidentally there are also some Greens and plenty of people who don’t belong to a party.

Sally refers to “other” factions but does not and will not name the Independent Broad Left, who I am sure endorse her as a candidate whether she is connected to them or not. I know of only Vicky Blake who is a truly independent candidate (there may be others) but barring one honourable exception IBL candidates state that they are independent in campaign literature so most members have never heard of them even though once elected they vote as part of a bloc on crucial issues such as industrial action.

The other thing not mentioned is the IBL and Lexit. Sally is quick to remind members that the SWP supported Lexit, which they did, openly. What this completely and it’s hard not to think deliberately misses is that the IBL are broadly organised by the CP (communist party) although like the left, contain plenty of Labour party members also. Like the SWP the CP supported Lexit. So this is not a matter of factional external interest: rather, there are two factions operational within our union, both with key members linked to external political parties and both of whom had members campaigning for Brexit, along with members who campaigned the other way. The racism that has built in the last few years and the implications for migrants including but definitely not limited to the climate and implications of Brexit require more than mud-slinging to resolve.

In a time of growing challenges for trades unionism and increasing attacks on education we need a union which fights for our members but I also believe we need to fight for our students and our communities. Democratic debate is at the heart of how unions function – debate which involves us meeting, organising and making decisions collectively. I understand the pressures to shift from model to a single cyber-relationship between the GS and the members but I don’t think that cutting out us interacting with each other would be a step forward in how we organise or get rid of the workload problem that prevents organising.

I m often exhausted by my attempts to balance the three main commitments in my life – my young family, my teaching and my trades unionism. I voluntarily do my activism stuff because it is core to what I think about how the world works and how I can make the world better for my kids, my colleagues and my students.

I’m proud to support Jo who used to be an access student like mine and who is a branch rep and Corbyn supporter like me. Jo is completely open about where she coming from but as a branch rep in practical terms she is someone who recognises and values the need to work with everyone. I think she is just what we need.”