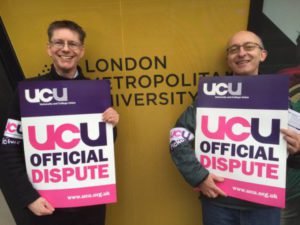 We sadly have to report to colleagues that we (David Hardman and Mark Campbell) have been unsuccessful in our appeals against redundancy from our positions at London Metropolitan University. As you may know, we are the two UCU negotiators for UCU at London Met, being the branch secretary and chair, respectively. David is also the Secretary of UCU London Region and Mark is the Chair of the UCU London Region HE Committee.

Management served us notice of redundancy in May, following a process that failed to meet the most basic requirements of transparency. At our appeal hearings the Dean of our faculty did not submit any written information. There is literally no audit trail for the decision making process involved in our redundancies. The letters confirming our redundancies do not attempt to address many of the key points we raised in our arguments.

We firmly believe that our removal is because of our activities as trade unionists. If the management are allowed to get away with this, it will act as a deterrent to other members coming forward as union representatives. With London Met poised to potentially be the first university in the UK to be privatised, it would be very convenient for management to have us out of the way and not making waves. This should be a matter of great concern for the rest of the sector.

There will be a protest rally outside London Met on Holloway Road this coming Wednesday 13th July at 1pm. If you are unable to get to this, we are going to arrange a poster for people to use for selfie photographs, which you can then email to us at uculondonmet@mail.com We also invite colleagues to email messages of protest to the Vice-Chancellor, John Raftery, at j.raftery@londonmet.ac.uk and will shortly be issuing information about a Thunderclap (Twitter) campaign: Reinstate UCU’s Mark & David.

In addition, to protest against both victimisation of union reps and the recently-announced loss of a further 400 jobs at London Met, there will be a national demonstration – Education For All – in Islington on Saturday 23rd July, gathering at the Tower Building on Holloway Road and walking to Highbury Fields for a rally. Gather at 11.30 to head off at 12. Please let friends and colleagues know.

Finally, the text below is for an open letter to the Times Higher Education. The deadline for submissions is 9am on Monday 11th July. Please contact us at uculondonmet@mail.com asap with your name, institution & position, and email address if you would be willing to be included as a signatory. 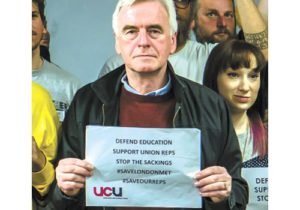 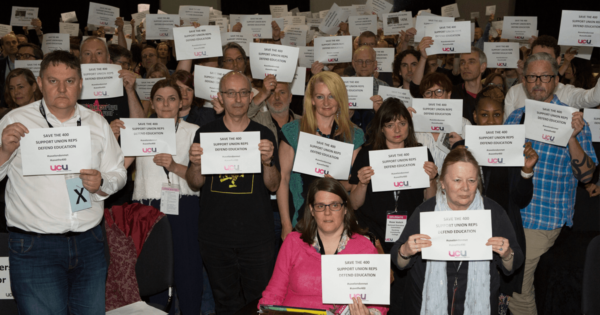 To: The Times Higher Education

The compulsory redundancies of two leading UCU representatives at London Metropolitan University, David Hardman and Mark Campbell, is a travesty of justice. Their appeals were declined this week. The very least that one might expect of an appeal hearing is that there is an audit trail of the decision making involved, especially at an institution whose strategic plan claims to value ‘openness’. No audit trail of the decisions involved was presented at their appeal hearing; in fact, the Dean of their faculty – Prof. Dominic Palmer-Brown – did not submit any documentation at all.

Mark and David are the only compulsory redundancies arising out of the cuts announced by London Met last autumn. We believe that they have been singled out because of their effective work as UCU representatives. With another 395 job losses now in the pipeline, as well as potential privatisation (the new Chair of Governors is a former executive at Pearsons), the management are conveniently removing the two leading reps and sending a clear message to other staff not to put their heads above the parapet.

Does a university with a background as a champion of social justice really wish to stake a claim as one of the most anti-union employers in the sector? The Deputy Vice-Chancellor who chaired the appeal panels left for his summer holiday immediately after notifying David and Mark of the outcome. By contrast, David and Mark will be working until their final day of employment in order to continue their work as lecturers and to represent colleagues during the latest onslaught against jobs.

We call upon the management and Governors of London Met to recognise the injustice that is being perpetrated and to reinstate Mark Campbell and David Hardman.