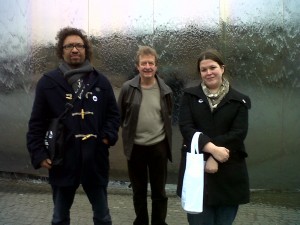 Monday 4th March was a day to be proud of UCU in South Yorkshire (and North Derbyshire!). I was privileged to drive Dave Muritu, the victimised Halesowen branch secretary, and Rhiannon Lockley, who has taken over from him as secretary, around the county visiting UCU branches. Everywhere we went Rhiannon and Dave told their story – and everywhere we went the trade unionists we met were both horrified and angered.

Our day started at Sheffield station and we were met there by Liz Lawrence, straight from a SHU branch committee meeting with a warm welcome (and a collection for their Hardship Fund!). Then on to Barnsley College for a coffee and a collection  before doubling back to Sheffield University to receive another collection and sandwiches (thanks to Jane Rodger’s thoughtfulness!) Next stop was Doncaster College and yet another collection followed by a frantic race to Chesterfield College to the biggest meeting so far and 2 donations to their Hardship Fund, one from the UCU branch and one from Chesterfield Trades Council.

Sheffield NUT had invited us to their Executive meeting at teatime ( the sandwiches we had there were very welcome) and Rhiannon and Dave told their story yet again. It was noticeable how shocked the NUT members were by the story of the sackings and they were very generous in their donation. Finally, Dave and Rhiannon spoke to a Unite The Resistance meeting at 7pm – and yet another collection was taken. In all, we spoke to about 60 trade unionists – and branches like Sheffield University UCU and Sheffield NUT decided to send a full account out to their members as a result. The collections we were given totalled over £650 for the Hardship Fund. (And I have a further £70 collected from the Yorks UCU Retired members branch yesterday).

What made me proud was the way that so many UCU branches responded so well to the Halesowen dispute. Hard pressed branch officers took the time to talk to their members and collect money from them as well as meeting with Rhiannon and Dave. Not only that but their clear support and  ideas for what to do next encouraged our Halesowen colleagues. Dave texted me later to say he had been ‘reinvigorated’ by the day. He has been sacked for nearly 3 months now so now wonder his spirits flag sometimes.

As James Eaden said at our Chesterfield meeting, solidarity is a two way process. It obviously helps the recipients, but it strengthens the branches giving too, by generating discussions and explanations about the Halesowen dispute and why solidarity is vital.

The UCU members at Halesowen are putting up a brave and impressive fight. Monday proved yet again how much support they have in the union. I would very much like to be involved in organising a similar tour in the Leeds/Bradford area in the near future and I am sure something similar could be done elsewhere in the country. If and when we have a another national day of action in solidarity with Halesowen such tours can help to ensure that far more branches participate.

Finally, we have invited the Halesowen branch to speak at our South Yorkshire Unite The Resistance conference on Sat. March 16th where we hope to get 300 people in to listen to Mark Serwotka and Kevin Courtney – i hope to see all of you there too!

One Reply to “Solidarity Tour for Halesowen dispute in South Yorkshire.”