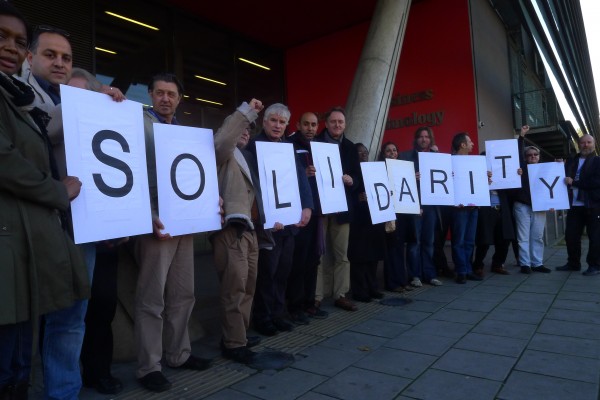 In the UK, while there were some local protests, the TUC and  trade union leaders missed a major opportunity to get behind today’s action.

We need to bring Europe to Britain! We have a great opportunity to plan how we do that this Saturday at the Unite the Resistance conference in London.

There is a great line-up of speakers  including John McDonnell MP, Kevin Courtney of NUT, Mark Serwotka from PCS, Matt Wrack of the FBU, speakers from Greece and Egypt, but just as importantly the conference will also be an opportunity for workers and campaigners in various sectors to meet and discuss how we build the networks we need and the resistance to austerity that millions want to see.

Stop Press: Tumi Moloi, a striking miner from South Africa, will speak at the conference.

Tumi is a strike committee member in Rustemburg, where 30,000 platinum miners working for Amplats – a subsidiary of global mining giant Anglo American – have been on strike for two months.

This is a chance to hear first hand about a crucial international struggle.

You can get the full agenda and book your ticket by visiting  uniteresist.org