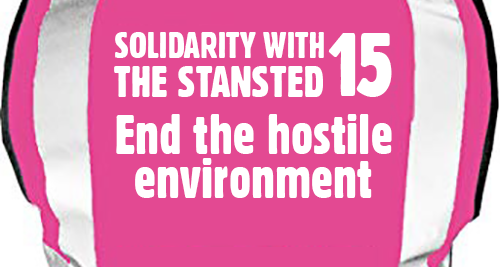 In March last year, 15 activists prevented the deportation of 60 migrants, some of whom now have leave to remain.

The Stansted 15 have been convicted under the 1990 Aviation and Maritime Security Act, a law passed in response to the 1988 Lockerbie bombing being used for the first time against political protest.

The Stansted 15 have received widespread support. A UN global report has backed them as human rights defenders and condemned Theresa May’s ‘hostile environment’.

The sentencing of the Stansted 15 is due on Wednesday 6 February and could result in custodial sentences or heavy fines. This is a real threat to legitimate political protest in the UK.

What you can do: