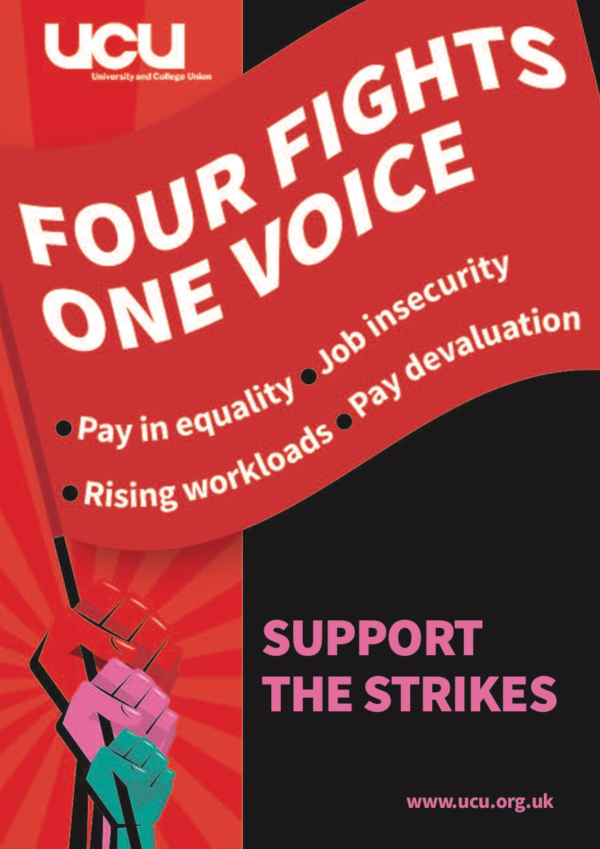 The struggle waged by UCU members over our Four Fights has been magnificent. Standing up against inequality and to defend those in our sector in the most precarious position represents the very best of trade unionism. Members showed determination to overcome the obstacles set by the anti-union laws and turned out on picket lines in all weather

Our action did move the employers. For the first time ever, they agreed to collectively bargain at a national level on casualisation, gender and race equality, and workloads, a significant shift in favour of all HE workers. This movement was achieved through the strength of our strike action, accompanied by impressive rallies and demonstrations, and with the support of large numbers of students who recognise that they too are victims of marketisation of higher education.

However, the current offer from UCEA is not strong enough. Covid 19 disrupted the negotiations at a crucial point so UCU Left negotiators cannot recommend acceptance of this offer. Branch delegates should reject it and it should be the decision of our elected branch delegates as to whether this offer should be put to members or dismissed entirely.

Why we should not accept the UCEA offer

1) There is no offer on pay. The whole negotiating team was always clear with the UCEA representatives that we required movement on all four elements of the claim in order to settle. At one point during the negotiations, UCEA indicated that they were considering improving their pay offer. But, for a range of reasons that can be debated elsewhere, their position hardened and they backtracked. Since then, they have hardened their stance further by refusing to open negotiations in the 2020-21 pay round. The lack of an offer on pay alone makes the offer unacceptable.

2) The offer on two of the elements of the claim – gender and race equality, and workloads – may have been acceptable alongside a pay rise and before Higher Education was thrown into crisis by the Coronavirus pandemic. Now they are completely dwarfed by events. The offer on casualisation is not even close to acceptable.

The first big weakness of this document is that the agreement is not binding on institutions. It requires UCU branches to push their employers into acting on the ‘expectations’ UCEA have expressed. This may be useful for well-organised branches with established negotiating arrangements.  It is much less helpful for branches in a weaker position who are often in institutions where action on casualisation, equality and workloads are most needed.

The second problem is that in the context of the Covid-19 crisis, with institutions lining up to dismiss staff, starting with the casualised, with online teaching workloads going through the roof, and existing inequalities exacerbated by homeworking, the provisions in the offer are wholly inadequate. Recognising this the negotiators made attempts to get UCEA to revisit the offer in the context of the crisis, but UCEA refused to meet. Evidently, the employers had already decided that they were going to use the pandemic to attack jobs, pay and conditions as we are already witnessing at Roehampton, Reading, KCL and elsewhere.

Some may argue that even though the positive aspects of the offer are limited, they represent improvements that would be worth accepting. Let’s ‘bank’ this offer and move on. We disagree. Without sector wide implementation it would be a paper victory at most, rapidly undermined by facts on the ground. With a huge battle looming over the future existence of the higher education sector, the last thing we should be doing is signing a truce with our employers. To settle for this offer would be a betrayal of the casualised, women and BAME members who fought so hard for 22 days.

Others may argue that it is best to ‘draw a line’ so that we can refocus our energies on the new battles ahead. This too would be a mistake. A settlement with no pay offer, and no implementation commitment would demoralise members, and make it more difficult to mobilise the union against upcoming attacks on jobs and pay, or to resist pressure to accept unsafe working conditions. It is worth noting that 12 HE branches (including SOAS, where ‘job reductions’ have been announced), currently have live ballot mandates until the end of July.

The fight must go on

Although it is difficult, we can still fight during this crisis. Our employers are completely reliant on our goodwill, even as they threaten us with redundancies, pay cuts and attempt to push us back to unsafe campuses. Goodwill can be withdrawn. The NEU’s current fight with the Government over 1 June school opening shows just how dependent the employers are. We can also ballot and take industrial action, even from home (many members, including at the Open University have been doing this for years). Resuming the fight won’t be easy but accepting a poor deal will make it harder.  Not just for the short term, as hard a line as UCEA is taking now, if we accept this offer, they will be emboldened.

The problem is that our union has not yet risen to the challenge of the Corona crisis. Our sister union, the NEU, has taken a vocal stand on workplace safety, held dozens of mass meetings of reps, and is challenging the government on its entire strategy. Thousands of new members are joining as a result. The UCU, by contrast, took weeks before reissuing the NEU’s Five Tests on returning to workplaces. The General Secretary tells us we can’t ballot and we can’t fight. We still have no national plan for defending HE jobs or resisting pay cuts. We have yet to receive guidance on safe return to work, more than two months since campuses closed.

Congress and Sector Conferences have been cancelled, and the only mass meetings (briefings for branch officers, one for FE, one for HE) on Teams resembled stage-managed lectures compared to the open discussion taking place in branches. Branches that have embraced Zoom meetings have seen turnout double since the start of the crisis.

This has to change. We need to get organised! We need to ramp up for a major sector-wide defence of higher education. The first step is throwing out this offer and keeping our disputes alive. The second step is to organise in branches and regions, coming together nationally, where we can, so that we, the members, can develop ideas and strategies to defend working conditions, jobs and the future of HE.