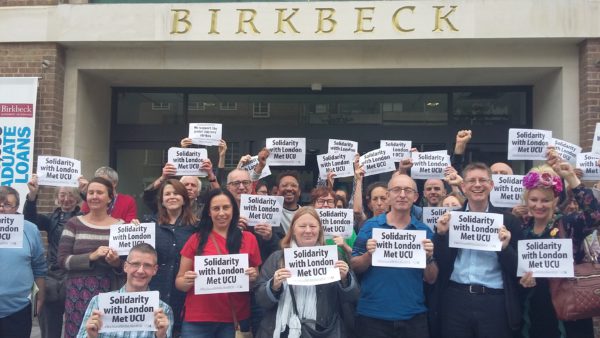 UCU’s regional pay briefings have now been completed, and responses were fairly consistent. In summary:

1.                 There is little support for accepting the current offer. Nor did reps say that the latest offer represented a significant improvement to warrant a ballot of members.

2.                 In addition to headline pay, there is broad support from members for employers to address inequality with respect to the gender pay gap and to insist on addressing the growing problem of casualization. We need to develop a strong campaign with good materials and regular information for members so that they know UCU is serious about the dispute.

3.                 The absence of a campaign over pay since the summer has meant members are concerned that the union is serious about continuing the dispute. Reps said that members are prepared to take industrial action if it is part of a strategy to win.

5.                 Changes in anti-trade union laws will make it significantly harder to win a national ballot for future pay rounds in the short-term, making this year’s settlement of greater importance.

UCU Higher Education Committee meets on Friday to consider how to take the dispute forward. Our view is that we now need to focus attention on the pay dispute and announce dates for strike action and a marking and assessment boycott, and building the dispute through members’ meetings etc. and relating the dispute to the crisis in the sector. Naming dates for action raises the profile of the dispute and the union’s commitment to pay and equality.

Naming dates for action also strengthens those who want to fight to defend jobs and workloads when the union demonstrates its willingness to defend members’ interests. Employers such as at London Metropolitan University, Coventry and Aberdeen Universities (and, in FE, Hull College) are emboldened to axe jobs, break agreements and victimise union activists if they see the union as passive. A serious fight over pay can not only win on pay but act to resist attacks on jobs and workloads.

Fighting nationally over pay represents a key contribution UCU can make to the defence of Higher Education. The danger with the HE Bill is that the sector breaks apart into competing universities scrambling to recruit each others’ students. In this context, national pay awards will become increasingly difficult to achieve and enforce. This has already happened in FE.

UCU Left members will therefore be calling for a programme of strike action this term and a boycott of assessment and examinations next term.