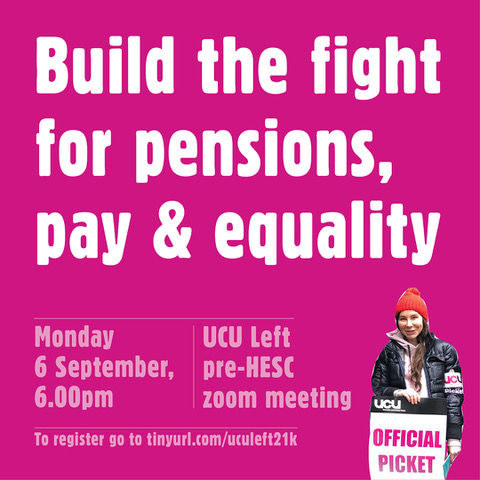 UCU’s USS negotiators are angry that the employer proposals to slash benefits have been voted through on the chair’s casting vote at the Joint Negotiating Committee.  This will mean that benefits are cut by at least 21% and probably a lot more if inflation is high for a few years.

The three elements of the cut are:

UCU rightly condemns the employers’ intransigence and unwillingness to work with us to put real pressure on the trustee company to cancel the unnecessary Covid valuation and the October contribution increases and replace them with a moderately prudent evidence based 2021 valuation.

It is a step forward that UCU is now organising a mass meeting for members on Friday. This needs to be fully interactive and modelled on the NEU’s approach and that adopted by Liverpool UCU in their successful dispute.

However, we now need industrial action to overturn the JNC decision and save USS.  Otherwise, our pensions will be whittled away until they are worth very little or contributions will spiral up.  Neither are acceptable.

Our action needs to start in the second part of the autumn terms.  We are therefore calling for delegates to vote against motion 1 and to vote for  motions 2-6, particularly 2, 3 and 4 on industrial action at the forthcoming Special Higher Education Sector Conference (SHESC) on the 9th September.

The UCU proposals were a tactical choice that UCU Left negotiators did not support and which was counter to decisions of the June HE sector conference.  They would have led to a very significant cut to benefits, almost as bad as the employer proposals.   Meeting with employers locally to try to persuade them to provide covenant support for these proposals will divert energy from what is needed now – building for a ballot on industrial action.

As indicated in the motions to SHESC we need to take action to defend our defined benefit pensions without any cuts to current benefits. We also favour motions calling for lower contributions with the same benefits for all members for lower paid members.  Governance reform, to throw out 2020 Covid valuation and get a moderately prudent evidence based approach in the future should also be supported.

We also need to remember that we cannot disassociate pensions from pay. A united campaign  to defend out pensions in pre-92 universities should not be separated from the pay campaign across both pre- and post-92 universities.

We encourage branches, regions/developed nations and groups of members to urgently hold meetings to help Get the Vote Out and we are happy to come and talk.

This week’s decision by USS makes it imperative that the the forthcoming Special HE Sector Conference (HESC) on 9th September initiates a serious campaign of industrial action in defence of university pensions.

But this fight can’t be waged at the expense of deferring a fight over pay and pay-related issues. The only way to unite the union against the attacks we face in higher education is to fight over pay, pay inequality and casualisation as well as pensions. It is important that the HESC commits the union to a concerted campaign over both the USS and Four Fights disputes, including a timetable for ballots and action.

This meeting will review the agenda for the HESC and is open to all UCU members, especially HESC delegates, who wish to see a serious fightback in HE this academic year. It will be addressed by USS and JNCHES negotiators Marion Hersh, Deepa Driver, Marian Mayer and Sean Wallis.