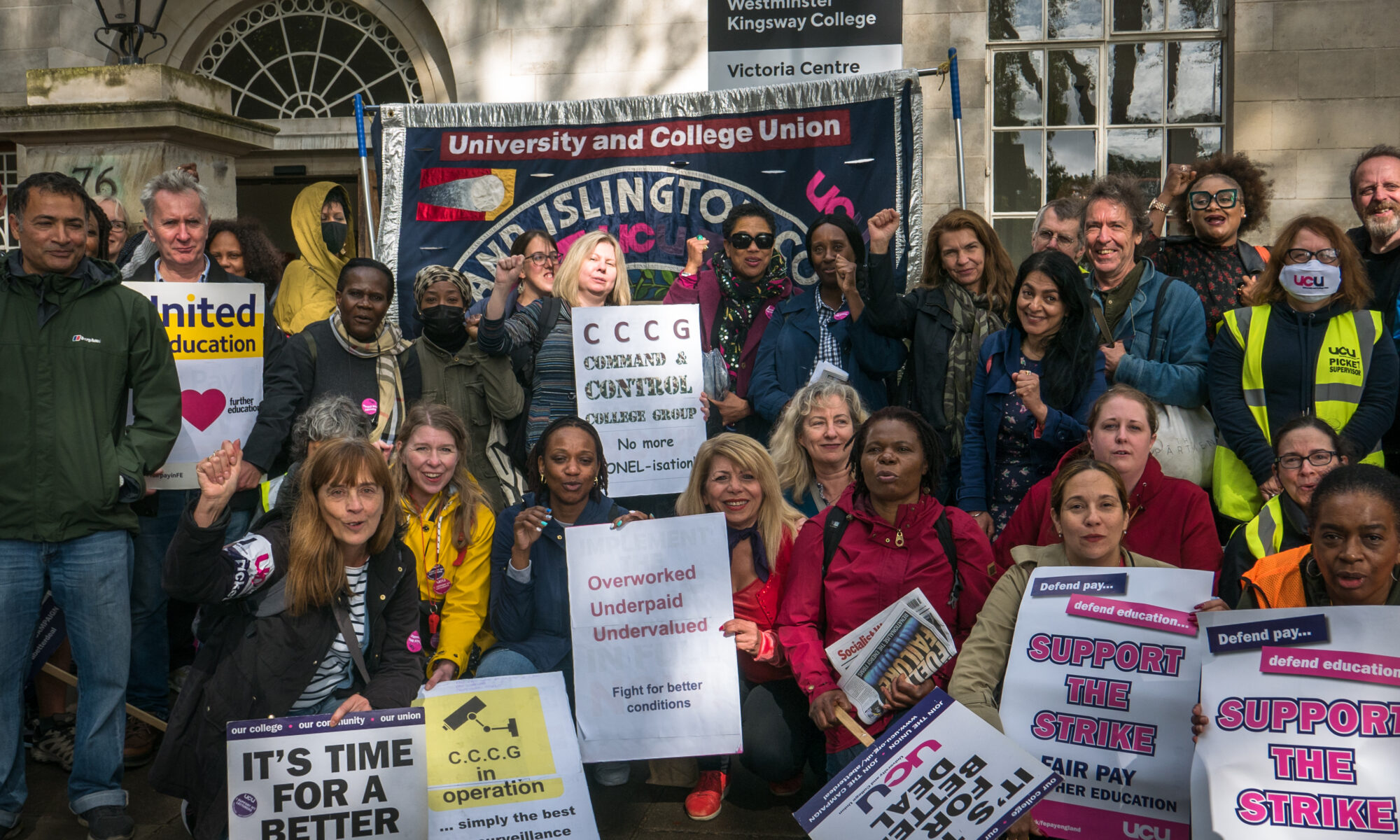 Thirteen of the fifteen FE colleges that balloted and/or took action have resolved their disputes. All have succeeded in getting more out of their employers than when they started. At my college, Capital City College Group (CCCG), members voted to accept the latest offer on an observation policy, pay and workload after taking ten days of strike action and a threat of six more. The open classroom policy that saw managers coming into classrooms, ‘anytime, anywhere’ has now been replaced with at most three 15-20-minute observations a year, not triggering any capability policy, and with advance notification.

Forty people joined the union since the strike started, with only two leaving. UCU at CCCG has reached a 91% density across the group among teaching staff and are in an even stronger position to fight in the future.

The lesson to draw from the FE disputes is that striking works. There is no doubt amongst UCU members who took part in action that this is the basic lesson to be learnt from the campaign.

Engagement and levelling up

But there is something else that is significant about our dispute. The level of engagement on picket lines, protests and other activities was greater than it has ever been.

For many years the level and character of industrial action has been much lower and sectional in outlook than the street movements.  But the recent spate of local strikes across the movement shows this gap is beginning to close. Not just in size, but also in sprit, defiance and imagination.

Our experience in FE is mirrored in other disputes that UCU are involved in. Mass rallies outside Goldsmith’s College and the RCA reflect this. The three-day national strike that kicked off UCU’s campaign over pensions, pay, casualisation and equality has seen enormous picket lines with lots of dancing and singing. The teach-outs on the picket lines demonstrate the way in which those on strike are putting forward a wider political alternative over a range of issues; from decolonizing the curriculum to unions, class and inequality.

This is happening in a ‘post-Covid, post COP’ environment without a Labour opposition in Parliament, and against a background of a maturing crisis in tuition fees.

The same process is also happening outside of the UCU. Strikes involving Unite, RMT, PCS and GMB members have seen large and lively picket lines with flares and more singing and dancing.  From the scaffolders at British Steel in Sunderland fighting over pay or engineers at Weetabix striking over fire and rehire to bus drivers in South Yorkshire striking over pay and the security guards at Great Ormond hospital demanding equal contracts – all show great determination and organisation to use their collective power to win.

Of course, we will need far more action for the levelling up to reach the levels of the hegemonic impact streets movements like the Stop the War Coalition or the Climate Emergency protests achieved.  But this process is taking place.

The sign that the character of the street movements is penetrating strikes is not only found in their vibrancy but also in their ability to locate the problem with the government and the system itself. Workers are fighting over economic issues; pay, pensions, workload, casualisation, redundancies and conditions.

But these strikes are not conducted in a sectional way despite being localised. These local economic strikes are seen by those involved, and wider, as the fault not of just one employer but all employers and the way the government rigs the system to allow those at the top to get rich at our expense.

In the post sixteen education sector, whatever the disputes have initially been called over, the galvanizing strand that runs through them all is the demand for an end to the stultifying grip of marketisation and for professional respect.

The levelling up is not just in one direction from the street movements to the picket line but from the picket line to the street protest. The demonstrations around COP26 were noticeable by the trade union representation on them. In London there was an 800-strong trade union block. In Glasgow striking bin workers were at the centre of the monster 30,000 march on Friday to coincide with the school climate strike.

There is something else that sets these strikes as apart from those have taken place in the past – the level of solidarity for the strikes. The UCU Solidarity Movement has pioneered a new network that has allowed local strike experiences to be generalised across the union. Generous donations have been voted on at mass union meetings to support those who are taking action.

At our rallies at CCCG we had local government and health workers, teachers, rail workers, students, HE strikers and a UNITE representative sent by Sharon Graham’s office as well as MPs and local Labour councillors.

The solidarity not only lifted the confidence of those on strike but located their strike in the wider battles and concerns of the movement.

There are also signs that the trade union leaders are responding to this new mood of militancy. The CWU hosted a solidarity rally in support of the RMT tube strikes in London and in support of UCU ‘s national action. A thousand people attended the online meeting on a Friday night and the organisers allowed contributions from the floor. UCU hosted a follow up meeting where 400 attended.

It was good to see Sharon Graham and Jo Grady take to twitter and attack Sadiq Khan’s attempt to use the issue of women’s safety in London to try and force the RMT to call off their strikes on the underground.

The need to build solidarity for all those in struggle must now become the central aim of all activists in trade unions. Some of us who are old enough to remember how we used to take striking workers around different workplaces to raise support for the strikes need to share their experience of how to do so. Arthur Scargill, in an interview in New Left Review in 1975, describes how the solidarity built by students who took striking miners around workplaces in different cities was central to the victory of the miners in 1972.

In the run up to Xmas UNITE are threatening strikes to hit the supply lines for Tesco’s over pay and in the New Year the RMT will be balloting their members in defence of their pensions. The NEU will be holding an indicative ballot of pay and workload. The potential to coordinate strike action involving tens of thousands of workers in the New Year is coming into focus.

There is a real opportunity in every union to set up solidarity networks around the current disputes to maximize support for those fighting back.

A mood to fight

It is clear there is a change taking place in the workplace. Localised resistance is growing.  Alongside the sense that there can be no return to pre-Covid days where bullying and harassment, low and unequal wages, insecure contracts and increase workloads were making the experience of work so unbearable, for so many, there is a determination to be rewarded for the sacrifice working people made, and still are, during the public health crisis.

Whilst the strikes that are taking place are a sign of a developing trade union movement, there are not enough taking place to shift the balance in favour of ordinary working people. We need more of them. This won’t happen simply by wishing action into existence: it takes leadership with the determination to initiate action.

There still is a reluctance in some of the bigger unions to hold national ballots in fear of not breaking through anti-union thresholds. Some have tried but did not succeed. In UCU we were quite right not to organise our last ballot in HE on an aggregated basis, despite the final results narrowly beating a 50% turnout in both ballots. It would have been an unnecessary gamble to do so. It was close, and in an aggregated ballot the pressure on individual branches to deliver is less.

We now have a majority of university staff out on strike, with others being reballoted to join in a second wave in February. Other unions should rethink their aversion to using the tactic of disaggregated ballots to get coordinated action off the ground. Whilst it might not be what we want, it is better than accepting that the Tory union laws mean that we can only organise ballots around local disputes.

A new trade union movement is being forged on the picket line. The movement needs to rally to their battle cry and do all we can to ensure their success.