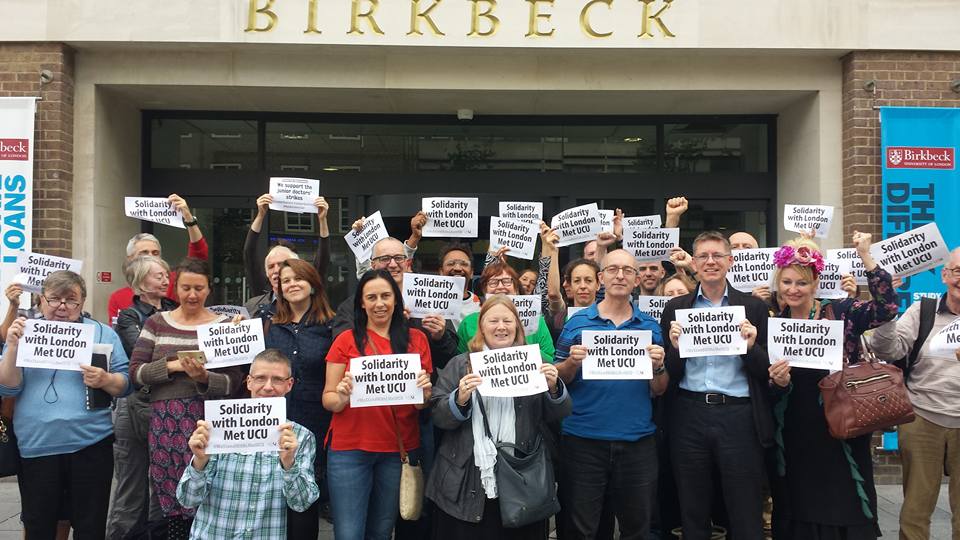 Helen MacCarthy recently posted that there are cuts being pushed through at Hull College. This radio interview about Hull is very informative. However, we have just discovered that UCU President, Rob Goodfellow, is one of the staff members being invited to an individual redundancy consultation meeting.

It is truly shocking to hear that a UCU President, a person on paid secondment, is being lined up for possible redundancy. Mark Campbell and myself would like to express our solidarity with Rob and his colleagues at Hull, as well as those currently under threat at Leicester, and no doubt others under threat elsewhere (with recent posts here indicating concerns about Sheffield).

Here at London Met, the fact that management consult UCU on virtually nothing, beyond the lip-service paid to consultation at JCNCs and statutory S188 meetings, suggests to us that we and UNISON are being almost entirely sidelined. Management complain that we are oppositional, but this is a position that they push us into!

It seems to us that the national situation is not much different. The contempt with which UCU is treated in some institutions is mirrored nationally by the derisory pay offer being made to HE staff, by the continuing gender inequality, high reliance on casualised staff, increased use of performance management, and punishing workloads.

However, today’s victory by Jeremy Corbyn in the Labour leadership election also presents us with an opportunity to take the fight to the employers and to the Tory government. After his win was announced, Corbyn immediately called for a national campaign for inclusive education next Saturday. We hope that large numbers of teachers, college and university lecturers, support staff, students and parents will take to the streets to demand a properly-funded system of free education from the cradle to the grave. Let’s work hard to encourage our friends and colleagues to be a part of this. Next Saturday’s action should help build momentum (if I can use that word) towards our own demonstration with the NUS on 19th November. Meanwhile, staff at London Met will be taking strike action on Thursday 29th this coming week and have expressed their wish to move to greylisting as soon as possible, should management not address the issues laid out in our formal dispute. We’d like to thank the people and branches who’ve given messages of support, whilst offering our own solidarity to those fighting elsewhere and reiterating the importance of a national fightback against asset-stripping employers and in favour of public education.