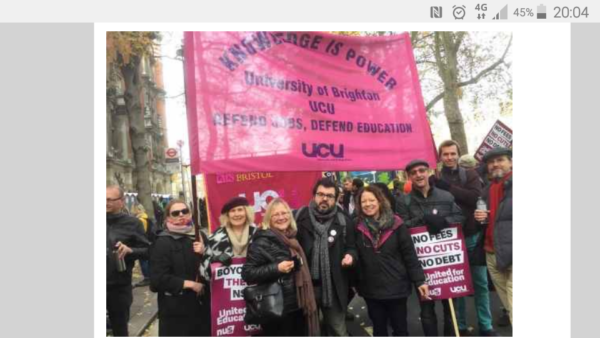 UCU members at the University of Brighton will strike on Monday and Tuesday of next week (20th & 21st March) against management breaches of their agreements and in defence of their negotiating rights.

A new, more aggressive management is seeking to follow up its decision to close the university’s Hastings campus with an assault on the working conditions of academic staff.

First they scrapped promotion to Principal Lecturer in this year’s promotions round and announced their intention to replace the entire promotions procedure with an unagreed one. Then they demoted a number of hourly paid lecturers to the grade of demonstrator, cutting their pay, already at the bottom of the lecturers’ pay scale, by 70%. Finally they issued redundancy notices to three lecturers despite not having implemented a newly negotiated workload agreement in the departments in question.

Management’s goal of sidelining the UCU completely became explicit when they refused to comply with the disputes procedure after it was invoked by the local branch to try and resolve the issues. The Vice Chancellor declared, ‘the University’s position is that it does not require the agreement of the UCU in respect of these issues.’

Members understand thIs to be an attempt to derecognise the UCU, in practice if not in name. The University wants to be able to ignore existing agreements and impose new terms and conditions without having to go to the trouble of negotiating with the union. As a result, in the ballot for industrial action, they voted by more than three to one (77%) for strikes on a 58% turnout, figures which would have exceeded the stringent thresholds now imposed on trade unionists in important public services by the new Trade Union Act.

The two-day strike next week is intended only as a first step in an escalating programme of strike action and action short of strike.