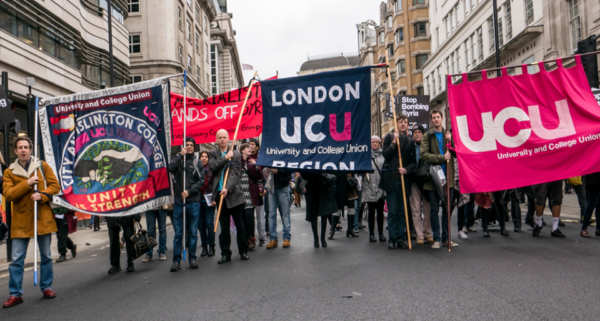 Following an indicative ballot where 75% of members voted for action over pay, thirty colleges across England are being balloted by UCU for better pay and conditions in the sector.  This is part of a nationally coordinated campaign to make employers take seriously the wishes and concerns of UCU members working in Further Education.

Government cuts since the financial crash in 2008 have had a disastrous impact on Further education colleges. Whilst there are around 800,000 16-24 year olds are without work, training or education and 1 million adult education student places have disappeared, 15,000 teaching posts have gone.

So much for the management and government mantra that demanding higher wages will ‘price yourself out of a job’.  They have taken our jobs and cut our wages.

The AoC (the national employers’ organisation) have offered 1% at this year’s national negotiations – another pay cut. Around 40% of colleges don’t even implement the AOC’s recommended offer!

Within the same time frame lecturers workloads have spiralled out of control leading to serious mental and physical health problems.  This is why many of the branches involved in the coordinated campaign have also, alongside a six percent pay claim, put in local claims too. They range for the demand to fractionalise HPL staff, through to reducing contact time to less draconian observation polices.

The money is there

Clearly the government’s funding cuts are the cause of the problems and we need to continue to campaign for the government to give more funding to FE as we have always done because the money is there. They have found £1bn to bribe the DUP and have found another £40bn to fund our exit from Europe.

Unfortunately too often these campaigns have had little support from our employers.

But it is clear that the money exists, both at a governmental and college level, to give a pay rise that our members deserve.

Not all in the sector have suffered financial loss in fact working in FE is very lucrative for some. Not everyone has seen their salaries cut over the past five years. Principals have awarded themselves on average a 9% pay rise.

Mergers and the creation of super groups have created financially robust colleges and the FE gravy train is rolling along nicely.  Within the group I work for, and it will be the same for many groups, a small minority of senior post holders have enjoyed significant pay rises; the three principals and the CEO have a combined income of around three quarters of a million pounds! The CEO is on around £250,000.

It would cost the college only £2m to give a thousand teaching staff a 6% pay rise. The combined income of my group is £121 million and the combined groups’ reserves is over £21m.

The money is there to start to make up for the years of decline and cuts.

Lecturers want change and they want it now…

UCU members in Wales and 60,000 UCU members in HE are also being balloted to defend their pensions and conditions of service and where possible we will be coordinating our fight with theirs.

In Further Education UCU members will be asked if they are prepared to take escalating strike action to pursue their claims with their local employers.  Reps report they they have had some of the best attended union meetings for many years at which members voted unanimously for action and emphasised that one day strikes will not be enough. Members are determined to make clear that, if we are going into battle, then this won’t be just about letting off steam. Lecturers want change and they want it now.

For many lecturers the feeling of ‘enough is enough’ is what is driving this new mood for action. Our pay has been cut whilst others have seen their salaries rocket, workloads have increased and the inclusive educational ethos that we entered FE to promote is being undermined.

Corbyn’s success has come about because he put forward bold policies and strategies.  McDonald’s workers punctured the prevailing orthodoxies that says we can’t win better pay and conditions through taking collective action. Through being bold and taking determined action we too can have our Corbyn and McDonald’s workers moment.

We are being asked to vote for industrial action to secure decent pay and secure contracts because we deserve it and so do our students. As the old saying goes, ‘The conditions that lecturers teach in are the conditions in which students learn. ‘

The ballots will open on the 23rd Jan and close on the 12th February.

Don’t lose your voice use your vote: Vote YES for action