Wednesday’s magnificent general strike by public sector workers in Greece was a mass show of defiance against the attempts by the Troika (the European Central Bank, the European Commission, and the International Monetary Fund) to impose further savage cuts on the people of Greece. It sent a clear message to their political leaders that NO means NO.

The incredible 61% No vote in the referendum by the people of Greece on a 64% turnout to reject the Troika’s austerity package was an important historic moment. Despite being under great pressure with crude attempts to blackmail them through forcing the closure of the banks the people of Greece said OXI. It was the first time that a whole nation gave its unequivocal verdict on the European rulers’ austerity measures.

But what was equally incredible was the complete capitulation to all the Troika’s original demands by the leadership of Syriza, the anti -austerity party, only a few days after being given a clear mandate to reject the deal.

Once again it is the working class of Greece that have provided the leadership to all those in Greece wanting to continue to resist austerity. They have shown their determination and bravery by striking and taking to the streets in their hundreds of thousands.

The battle that is raging in every community, street corner and workplace in Greece is one that will affect all of us. This struggle at the very heart of Europe will signal which direction resistance to the pillage and plunder by the rich and powerful will take.

Just as the struggle against Franco in Spain in the 1930’s or the revolution in Portugal in 1974 were key moments in shaping the international struggles so too will what happens in Greece today shape our generation’s understanding on how to take forward the struggle for justice and peace.

This is why we must do all we can to build solidarity with the people of Greece through sending messages of support and making links with colleges and universities there. We must also continue to discuss and debate how best to take this struggle forward. Just as much as the practical solidarity will help to decide which direction this struggle takes, so too will the political and ideological fall out from what happens in Greece. 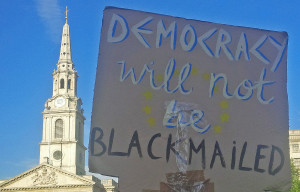 Many historical analogies are being drawn with the complexities of the struggle against austerity in Greece. The lessons of General Pinochet’s bloody coup against the democratically elected Popular Unity Government of Chile in 1973 is a common one.

Salvador Allende, the popular left wing leader, elected on a mass upsurge of struggle in Chile was killed by a US-backed coup against him. He died with gun in hand at his Presidential palace. His death signalled the defeat of this mass radical movement against

imperialism and gave a green light for one of the most murderous episodes in working class history. The Chilean Junta rounded up tens of thousands of people and imprisoned them in football stadiums where they were beaten and tortured. Thirty thousand people lost their lives in the aftermath of the coup.

Governments and employers used this defeat to introduce a ‘new’ economic orthodoxy called ‘monetarism’. The extreme economic theories of Hayek and Freidman now had a working model. It was under the control of the Junta, backed by the Nixon government, that monetarism was first experimented with. This economic model preached that unregulated market capitalism was the only way forward to save international capitalism from the crisis of the early 1970s. It provided the Reagan and Thatcher governments with their economic compass, one which they used to savagely drive down living standards throughout the 1980s.

The debate on the left about what went wrong essentially took two positions. There were those who argued that Allende and the Popular Unity Government went too far and too fast in expropriating the employers’ wealth through nationalisation and land reform. Others argued that it doesn’t matter how much wealth you take off the employers or over how long a time period you do it – employers don’t like it and they will do all they can to stop any government, by any means necessary, from doing so. Therefore, they argued, the Allende Government should have looked to those who gave him his power in the first place – the mass movement which had begun to set up their own forms of organisations called the Cordones.

It was through these new structures that workers in Chile in their workplace linked up with those in their communities who were starting to run society. Faced with the employers attempting to strangle the economy and therefore undermine democratically elected government through organising a bosses’ strike, out of necessity workers were forced to set up their own means of production and distribution through the Cordones – a system of workers’ councils.

Unfortunately it was the former and not the latter position that shaped the thinking of the left throughout the seventies and eighties. The acceptance of a more gradualist approach to change reinforced and gave confidence to those within the labour and trade union movement to shift further to the right. The rush to embrace neo liberal economics by all European Social Democratic parties throughout this period was one of the consequences of the left not recognising that the Chilean working class could have provided an answer to the barbarism of Pinochet.

Movements on the streets and the workplaces are the alternative to austerity.

Greece is not yet in a civil war situation. However through thirty – five general strikes over the past five years, the millions who have taken to the streets and the tens of thousands

who have occupied their workplaces and colleges a level of confidence and organisation has developed that can provide the alternative to a strategy that is tied to staying in the Euro and inplementing further devastating cuts.

The people of Greece have once again shown us that they will not simply walk off the battle field because some bankers in Brussels have told them that they must do so. They have no choice but to continue to fight and try and shape their own destinies. Eleven thousand people in Greece have been driven to take their own lives since the crisis begun. For the people of Greece this is a life and death battle.

The medicine that is now on offer is the same that has been prescribed to the Greek people over the last 5 years. It has not worked. The patient has just got sicker. They are right to reject it and to continue their resistance.

UCU is nationally affiliated to the Greece Solidarity Campaign. If your branch has not yet affiliated put it on the agenda at your next branch/LA meeting. But of course, as our friends from Greece keep telling us, the best solidarity that we in Britain can deliver for them is to bring down our own pro-austerity government. This task has just got even more urgent.