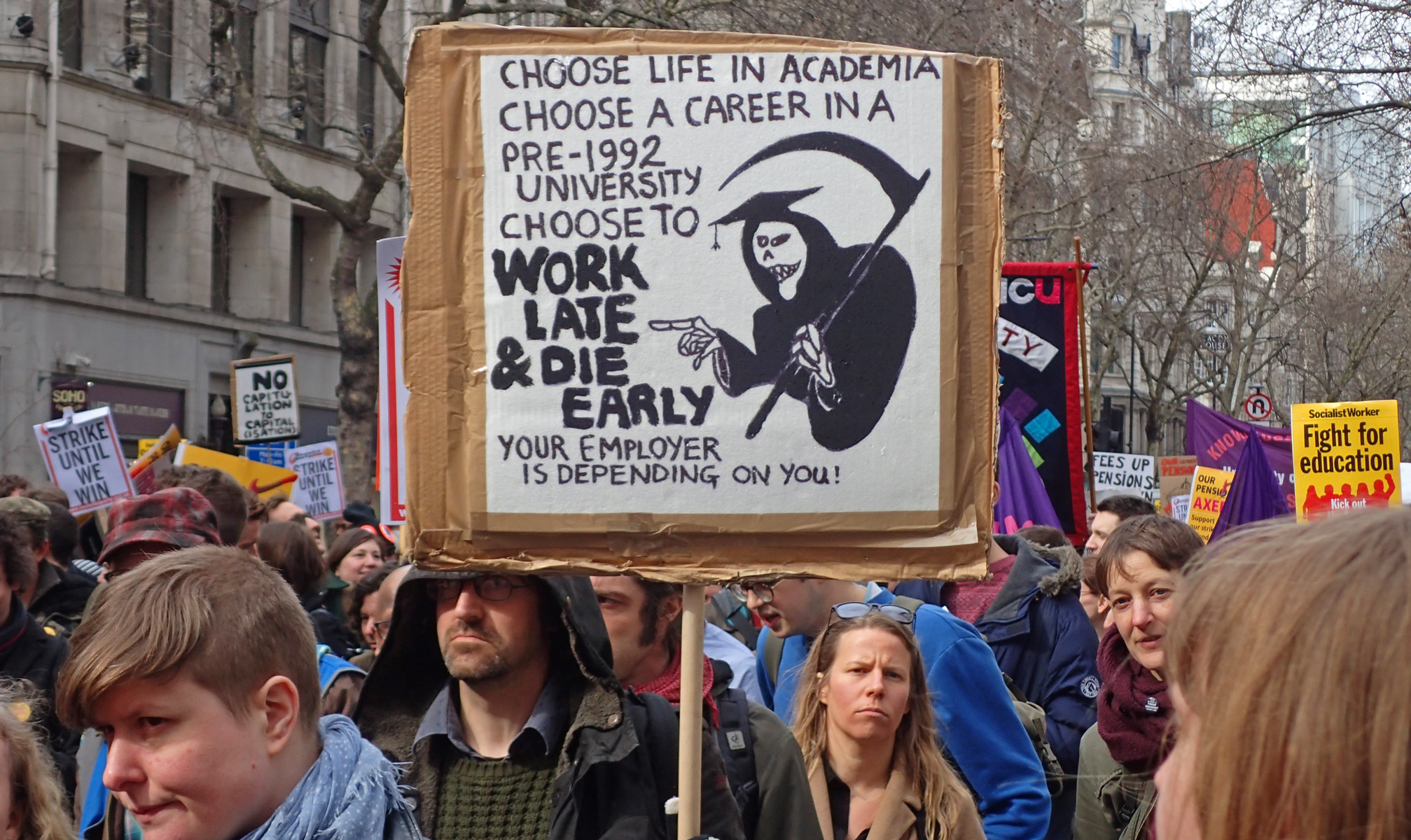 The disastrous HE tuition fee market experiment of 2011 is unravelling.

The much-trailed Tory-commissioned review into HE funding, the Augar Report, is proposing cuts in tuition fees to £7,500 but a much harder ‘hit’ on students: faster repayment schedules with a lower repayment threshold, a lower interest rate but students will carry a debt for 40 years instead of 30.

In UCU Left, we have always argued for cutting tuition fees to zero, bringing back grants, and demanding that “all who may benefit can come” to university (the so-called Robbins Principle). For us, Higher Education is the gift each generation bestows on the next – access to knowledge at the highest level. Make the super-rich pay their taxes, and this is entirely feasible.

But that is not what this cut is about.

Indeed, the Institute for Fiscal Studies reckon that the wealthiest students would benefit the most from the changes.

But this change – the unilateral imposing of new rates for degrees – is also a colossal market intervention on a supposed independent market!

The shockwaves will be massive.

So far the government has said it will not bail out colleges. Yet many universities have taken on large long-term debts for building projects. The Times reported in January that universities had taken on £10bn in loans.

Second, the market changes are intended to reduce student intake in certain subjects – Arts and Humanities disciplines in particular – that have seen the greatest expansion. Colleges which are dependent on these courses are likely to suffer the greatest.

If the changes are implemented, this new round of state intervention will likely drive some universities into the wall and propel students out on the street, indebted and degree-less. This happened in the USA with the collapse of the Corinthian Colleges, and if Augar is implemented, it is bound to happen here. The HE Bill (now ‘Higher Education & Research Act’) changed the constitution of university funding to explicitly allow universities to go bankrupt without being required to teach students to completion.

The Tory ex-HE minister, Jo Johnson, criticised the report, saying, correctly, that it will destabilise university finances. You’re not kidding.

Even before Augar, press leaks were of universities teetering on the edge of bankruptcy. Sir Michael Barber, Chair of the ‘Office for Students’, was reported in response saying that “no university is too big to fail”.

Now that boom-time is coming to an end, the employers are trying to make us pay the price. Just as they siphoned up the profits of HE expansion, faced with boom turning to bust, the university employers are trying to make us take the pain. They have held down pay increases below inflation yet again, driving down the proportion of budgets going to staff costs (pay and pensions) across HE, driving up surpluses and capital investments. Across our sector, from Westminster to the Open University, we have seen wholesale redundancies amidst shiny new buildings.

In the Pre-92 sector, the market is undermining the pension scheme. And the same approach is now being applied to TPS. Treating Post-92 colleges as independent universities justifies the Tory response to the Teachers Pension Scheme crunch – no more money – triggering cuts and redundancies, and potentially break-away pension plans.

We need a concerted national plan to defend the Post-92 Contract, redundancies and escalating workload in these universities. Most of all we have to fight like a national union and defend the sector.

So once a fightback in Pre-92 begins, we should use this to inspire resistance in Post-92. We are now committed to a pay fight uniting both parts of the sector. See below.

In UCU Left, we have long argued that the USS crisis derives directly from HE market competition. In 2017, we saw Cambridge and Oxford colleges threaten to go it alone. This May, Sir David Eastwood, USS JNC chair, wrote to Bill Galvin, USS CEO, to say that USS needed to account and pay for the risk of HE institutions breaking away from USS.

Is USS in trouble?

The current huge USS contribution hikes are in essence covering the cost of the ‘employer covenant’ – the guarantee that employers collectively make to guarantee the future of USS. This works on the presumption that universities will be around in the future, to support USS in the future. But market competition makes university survival less certain, pushing the scheme into a winding-up (‘de-risking’) valuation methodology. Hence ‘de-risking’, the misnamed process of devaluing the assets by dumping them in low-interest bearing government bonds and gilts.

The root of the problem is simply this. In a winner-takes-all, devil-takes-hindmost cuthroat competition, universities see each other as unknown risk bearers at best, enemies at worst. Thus in May, Trinity College Cambridge announced it was leaving USS because it did not wish to carry the pension risk of other colleges’ pensioners.

It is bad enough that costs on us are sky-rocketing. Worse, paying these additional contributions is to reward and encourage failure!

We cannot address this crisis by negotiating and hoping. We need leverage.

Look what happened after we stopped striking. We went backwards.

We are heading for disaster unless we fight. 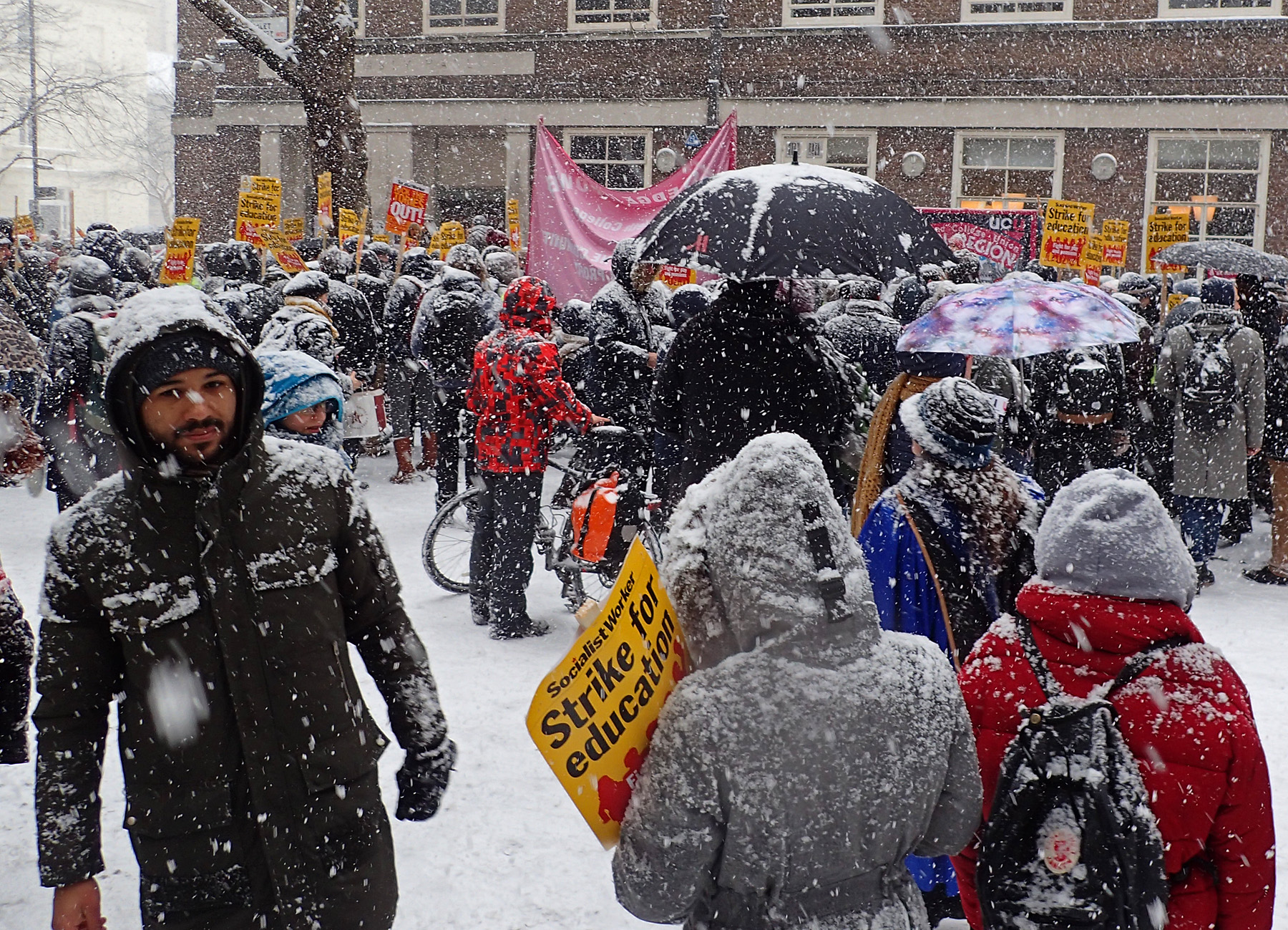 We have to fight back

When we fight we can rebalance the equation.

Before we struck in 2018, everything seemed lost. USS was heading for the abyss of 100% Defined Contribution. Within two weeks into 14 days of strikes, and UUK were beginning to backtrack.

Every Pre-92 branch of UCU faces a stern test. How will we rebuild the fight to defend USS?

Starting now, how do we organise a Get the Vote Out Campaign that instils confidence in our members to strike in the Autumn?

We will face two arguments.

This is Round 2 in the fight of our lives. A serious fight to defend USS has every change of winning, and in the process building a bigger defence for the future of Higher Education in the UK, uniting with students and everyone who cares about the future of society and the role of universities in it.

We should re-raise the demand that as part of the Augar review, the Government should guarantee USS (and underwrite TPS costs). After all, they are directly intervening in the market they created and undermining the UK university sector as a result.

UCU’s HE Conference decided on the following key actions:

Branches need to call General Meetings before the end of the Summer Term, to report back on Congress and HE Conference. Invite our new General Secretary Jo Grady, a USS negotiator or an HEC member to speak.

It is time to wake up the ‘strike committees’, ‘action committees’ and other campaign networks that branches built up before and during the last USS strike. Every single member who took strike action has a stake in this fight.

We need to plan the biggest possible Get the Vote Out campaign for September and October.

We need to explain that we won the battle, but we have not yet won the war.

We can put this right in Round 2.

But we need to get organised.

Obvious Question: How can we fight a climate crisis with a bankrupt university sector?