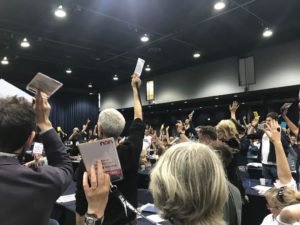 The General Secretary Must Be Accountable To Members

UCU National Executive Committee (NEC) met on Friday 1 March as an extra-ordinary meeting due to the resignation of the General Secretary, Sally Hunt, on health grounds. NEC unanimously thanked Sally for her leadership in both the formation of the union and its development over the past thirteen years. NEC also wished her well with her illness and hoped she would be able to manage her health to ensure she retained a high quality of life. It is very fortunate that we live in a society which benefits from a fantastic National Health Service.

UCU Left wishes to see a united single left candidate stand for election. We welcome discussions with all members interesting in standing for the GS position with a genuine desire to ensure the agreed left candidate has a maximum chance of winning this most important seat in the union.

Winning the seat for the left is a key part of creating a transparent, accessible, accountable leadership which will bring about the member led, campaigning union we all want.

We have an opportunity to transform our UCU. We have to rise to the challenge.

NEC was presented with a set of proposals on the process and timetable for the election of a new GS. Rules of UCU permit any UCU member or employed staff member of UCU to nominate themselves for election. These will be the same rules used for the previous three elections in UCU.

More problematic, however, is the timetable for the election. The timetable presented was to ensure a new candidate is elected prior to Congress in May 2019. However, the most significant argument over the accountability of officials and officers the union has ever had has been ongoing since the walkout of staff and the IBL majority on the NEC at Congress 2018. Since then, the Democracy Commission (created by Congress in response to the crisis) has included discussions of how we can formulate mechanisms for the recall of the General Secretary to ensure member-led democracy is strengthened within the union.

The timetable proposed at NEC circumvents and frustrates these discussions. A decision by a lay member to give up their job for five years is not one many can make on a whim. Yet the timetable ensures little time for any lesser mortal who has not known about this announcement weeks in advance to contemplate such a decision.

As a result, two sets of proposals were put forward to amend the regulations for the General Secretary elections. The first was to delay the election, and importantly the appointment, of the new General Secretary until a mechanism for recall had been passed at Congress. This matters because it has been previously argued by officials that any changes to the rules governing the accountability of the GS cannot apply to a sitting GS and will only apply to a future GS.

If this interpretation now was applied again to the future GS, protecting this person from recall, this would be an outrageous undermining of the Democracy Commission!

The Chair employed a classic, undemocratic manoeuvre by using her position as Chair to order business in a way which ensured that her supporters, i.e. the IBL, would not be seen to be voting against recall. This was done by taking the vote on the paper put forward by the bureaucracy first and then ruling that, if passed, the motions attempting to amend that paper would fall.

As a result both amending motions in this section fell without even being voted on.

The new GS’s contract and recall

The second set of proposals required that the GS’s contract of employment be modified to ensure that, if Congress agreed a rule for recall of the GS, it would apply to this new contract. Since the Democracy Commission is examining the potential for such a rule, which would go to Congress after the new GS had been elected, resolving this potential problem now was very important.

Without such a clause in the contract, the risk is that the new incumbent could potentially argue that the dismissal was unfair. Since candidates would sign up to this contract as part of the process of standing for election, it made sense for the NEC to ensure that all candidates agreed to the recall principle – even if there was no mechanism yet in the union’s rules.

The lead official advising the NEC reported legal advice stating that it was in fact possible to implement a recall mechanism using the existing contract.

Here again, the Chair refused to allow a vote on the proposals by suggesting that the passing of the unamended contract of employment meant the amendments fell. Again the vote to accept the unamended employment was 26 for and 21 against.

Let us be clear. This does not mean that the new UCU General Secretary will be protected from recall, but it does create ambiguity where none was needed.

Any ordinary member who was a fly on the wall in the meeting would have wondered why on earth did the Right of the NEC vote not to accept this motion as it cost nothing and would have simply confirmed the legal advice and protected the legal position of the union!

And it also means that all candidates for GS now need to be asked the following questions:

Do you accept that you should be accountable to members through a proper recall procedure in the union’s rules if Congress decides one is needed? Will you accept a change of terms of employment in your contract if this is said to be necessary, allowing for a recall mechanism to apply to you?

For all the claims that the IBL are not a faction they do indeed vote en-bloc remarkably consistently when directed by the chair!

It is to be expected that paid officials of the union and lay members of the union will stand. It is essential therefore that no candidate is given preferential treatment during the election.

In UNISON a major argument has broken out due to senior officials instructing employees of the union to campaign on their behalf.

Proposals to prevent this bullying of staff were also put forward by UCU Left members. Here the IBL voted with the UCU Left leading to a unanimous vote to prevent staff being disciplined if they refuse to act in a partisan way in the elections.

Similarly, candidates who are staff members or officers of the union will also be prevented from presenting UCU’s publicity in their name, with immediate effect.

Looking to the future

The next General Secretary will be crucially important to the future development of the union at a time when marketisation is fast progressing, when the membership of UCU has simultaneously grown and, crucially, at a time when a substantial minority of members indicates that a militant mood exists for action against marketisation.

On delaying the GS election

NEC thanks Sally Hunt for her service and sends best wishes.

NEC believes such a delay undermines the wishes of Congress 2018 and thus undermines our democracy which may create discord.

NEC resolves not to implement any election process that would undermine and render ineffective the introduction of recall mechanisms if voted for by Congress 2019.

On Democracy Commission and GS election

Both motions fell by 26 to 21 with 1 abstention, following passage of section of report

NEC agrees to amend the new contract of the GS in NEC1215 to explicitly ensure that, should Congress agree a rule change that establishes a formal recall mechanism, this mechanism would trigger the issuing of notice by the President on behalf of the NEC, under clause (i) of the Termination of Employment section of the contract.

NEC further resolves that, should the above solution be not deemed workable, to add a new clause (iii) to the Termination of Employment section of the contract. This would clarify that, provided that a rule for the recall of GS were triggered under UCU rules, the GS would be suspended from office and given six months’ notice to allow the election to be conducted.

Motion fell 26 to 21, following passage of section of report