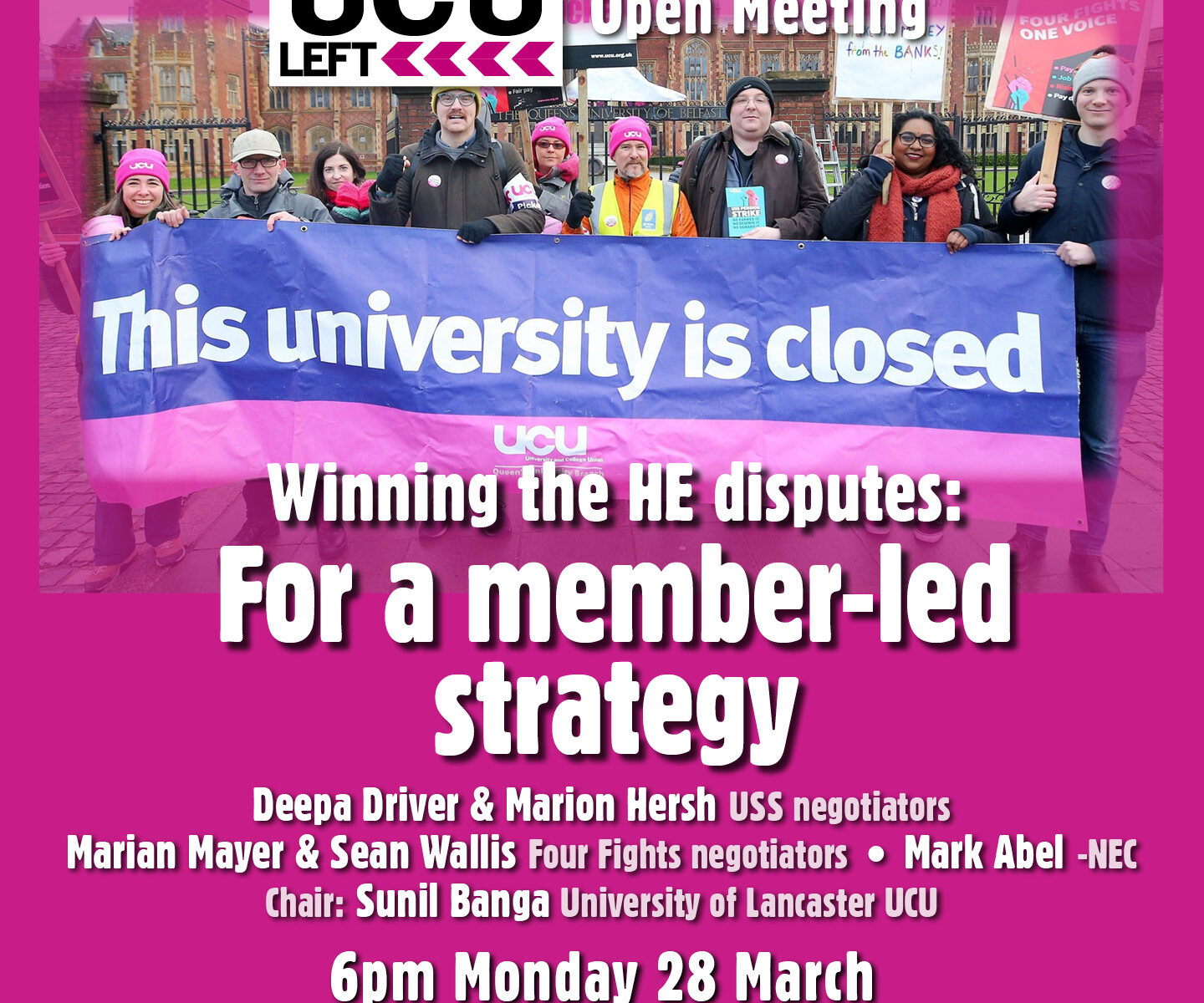 Our Higher Education disputes are at a crossroads. The strikes this week and next are the last we can take on our current industrial action mandate. USS and UUK have imposed their attack on the pension scheme. UCEA is not talking to us over pay and the pay-related issues of our Four Fights.

Strike action now is still important, of course. Strong visible action shows members require a proper pay increase in the face of rampant inflation, and strengthens the union over local casualisation, workload and pay gap demands. But we are not where we should be.

We have arrived at this point through a series of failures by our union. The majority of these have arisen out of a refusal by the leadership – HE officers, full-time officials and the General Secretary – to implement democratic decisions taken by members. This has resulted in members continually having to make the best of sub-optimal situations in order to prosecute these fights.

The whole point of the timetable passed at Conference was that serious, sustained action could take place in the autumn term. That is how we ended up with just three days of strike squeezed in before the Xmas break. Not only that, but the notifications to employers cited work-to-contract as the only form of ASOS, allowing employers to claim that non-rescheduling of classes was not part of our action because it had, inexplicably, been listed separately on the ballot paper.

The second failure was the decision by the General Secretary and the majority of the pension negotiators to make a compromise offer on USS. UCU conferences voted for a ‘no detriment’ position on the basis that the valuations of the scheme were flawed and there was no objective basis for increasing contributions or cutting benefits, and if there was a need for more contributions, the employers should pay them.. Abandoning this position meant conceding the central argument in defence of the scheme.

Worse, the General Secretary appeared to believe that a compromise deal was possible in February which could end the dispute. As a result, again contrary to the union’s policy and against the wishes of delegates attending branch delegate meetings, USS strikes were separated from action over the Four Fights, soft-pedalled and delayed again to coincide with meetings of USS JNC at which this deal was supposed to materialise.

This proved to be a staggering miscalculation. True to form, not a single employer representative broke ranks and the cuts were pushed through on the casting vote of the chair. The industrial action taken in February was fractured between the two disputes, giving the green light to UCEA to urge punitive deductions for ASOS, a course of action which some institutions have eagerly embraced.

Throughout, the leadership has consistently minimised the action called. The settled policy of the union is for escalating action to win disputes, and the September Special Sector Conference even supported a motion calling for indefinite action. The point of this was to deter employers from sitting out our bouts of strikes by always notifying at least one batch of action in advance.

Neither escalating nor indefinite action has been implemented. Ignoring the clear wishes of BDM’s, the majority on HEC even opted for a pattern of regional one-day strikes. This kind of token action has been definitively rejected by Congress, not least when it adopted the report of the Commission on Effective Industrial Action in 2017. Fortunately, the left on HEC managed to salvage a degree of credibility for this action by making it the five-day blocks we are currently engaged in. But yet another delay in calling that action means that some branches find themselves striking out of term-time, and members are rightly concerned about the union’s strategy.

The same HEC meeting voted for a reballot window of five weeks. We have ended up with one of only three weeks, throwing another unnecessary obstacle in the way of our disputes. When questioned about this at last week’s NEC, the General Secretary claimed that HEC’s wishes had been ‘unimplementable’. She was also challenged on the assessment of the disputes in her GS report, where she effectively argues that national disputes are unwinnable because the employers are too well organised and we are too weak unless all branches are out. Her conclusion is that unless we can win an aggregated ballot, we should not fight.

This kind of defeatist talk is not acceptable in the middle of a national battle. It contrasts sharply with the positivity and determination of members who have made considerable sacrifices to wage these disputes. It is also, plainly, wrong. In 2018, our union began the dispute with a third smaller union density, and won against employers who were just as organised! But the union led from the top, balloted on a no detriment basis, involved reps to identify optimum strike dates, and called escalating action.

We can still win

Both these disputes have always been winnable, and despite the set-backs, they still are. But control of them must be in the hands of members. Members have consistently made the right decisions about the strategy required, and UCU Left members on HEC have consistently tried to have those decisions implemented.

The next phase now hinges on the reballots. Assuming we get a good number of branches over the threshold, the Special HE Sector Conferences on April 20th and 27th will set the forthcoming strategy. Branches need to debate motions for those conferences in time for the submission deadline of 6th April. Crucially, we need a marking and assessment boycott along with a plan for strike action, both alongside the ASOS e.g. to hit exam boards, and as a response to punitive deductions. And we need to insist that Conference decisions are implemented!

Those at the top of the union who don’t have the nerve for this fight should stand aside. Now is not the time to throw in the towel. The employers remain extremely vulnerable to targeted and effective industrial action, as the strikes at Liverpool and the RCA have proved. We need to learn the lessons of those disputes and organise to win.