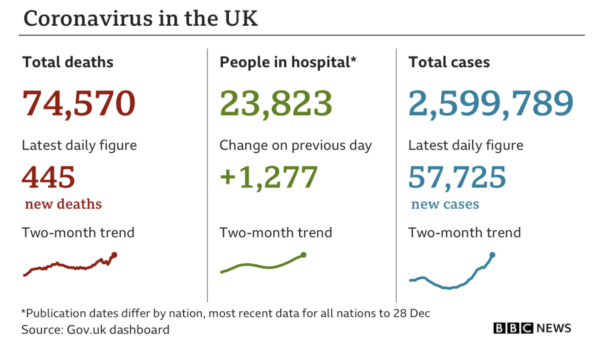 2021 has started where 2020 finished – in chaos, confusion and fear for millions of people. What we do now will determine the future for our students’ education and our members lives.

It is shocking that the death rate has reached over 70,000 and daily contagion rates continueto surpass those reached in March/April last year. Thousands have died unnecessarily due to the government’s refusal to listen to the advice of scientists and education unions but instead put the needs of profit before people’s lives.

Whilst the news of the Oxford Astra Zeneca vaccine availability is welcome, the short to medium term prospects are still ones in which many people will contract the virus and die from it unless strict safety plans are implemented.

The government’s latest last-minute announcement on schools, colleges and universities has once again led to confusion and despair amongst all those who work in the sector.

‘It is highly unlikely that measures with stringency and adherence in line with the measures in England in November (i.e. with schools open) would be sufficient to maintain R below 1 in the presence of the new variant. R would be lower with schools closed…’

The government’s plans do not go far enough to protect lives. If they had followed the science and UCU advice we would be in a much better position to control the spread of the virus and therefore ensure a lot less disruption to the education of our students in the last few months.

Unfortunately, they didn’t and now, once again, we will be moving more students onto remote learning. Government ministers’ recent discovery that many young people can’t access remote learning due to poverty and therefore the best place for them is on site, beggar’s belief. A government that cut EMA, raised tuition fees and has watched food banks grow, now tells us that for our student’s sake they need to be taught face-to-face, clearly has no credibility.

It is a shame that the government’s argument too often found an echo within the sector from people who should have known better.

We would all prefer to be back in the classroom, but it’s not about what we prefer it is about what is safe.

In March last year many employers worked with UCU in the colleges to ensure mitigation measures were put in place. Unfortunately, from September onwards too many college leaderships moved away from collaboration with the unions and fought to implement a business-as-usual approach. When the second lockdown came in November and schools and colleges were not included college leaderships did very little to resist this irresponsible decision.  In fact, many moved to increase the amount of face-to-face teaching.

It was a serious mistake for government and the leadership of the sector not to move to online learning in November. If they had have done, we would be in a far better position now.

There are reports of some colleges preparing to bring in staff and students from this Monday to teach face to face which even the government are not arguing for! Let us be clear. It won’t be just the government that have blood on their hands – it will be college leaderships too if they continue with this negligent behaviour.

We hope the leadership of the sector recognises that we can’t rely on government to make the right choices when it comes to staff and students’ safety. Councils like Brighton and Hove and Birmingham have ignored government plans to keep their primary schools open.

We have to take control and act now to protect lives.

The government plan as it stands for FE:

From Monday 4th Jan preparations for mass testing for all staff and students and all teaching to move online.*

UCU have real concerns about testing is going to be carried out.  The lateral flow testing method that will be used is not always reliable. One report [see: Evidence summary for lateral flow devices (LFD) in relation to care homes – GOV.UK (www.gov.uk)] revealed up to 50% of true positive cases were not detected (and was dependent on the training and experience of the testers).

What needs to be done:

The NEU nationally have recommended to their members that they should not return to work on Monday and move immediately to online learning.  200,000 people have signed the petition in support of this position already. Sign here to support our teachers. They have organised all members meeting were 100,000 teachers and support staff attended.

UCU has been right to campaign for remote learning to be the default position. We must now act collectively to force the government and our employers to protect staff and students lives. Of course, the new variant of the virus means that new risk assessments need to be reassessed.

However, this is only central if we agree that colleges need to continue a ratio of face-to-face and remote teaching. But we are not in this situation at this moment of time. All colleges must move to remote learning for the vast majority of teaching. There is no other way that we can keep our staff, our students and our communities safe from the virus.

UCU must not hesitate to make the same recommendations as the NEU. UCU must call an all members online meeting this week. UCU must, like the NEU, advise its members not to go into colleges and move all teaching online from Monday.

Also like the NEU, UCU must call upon its members to use Section 44 if employers refuse to move to remote learning. This is not the time to second guess what the legal ramifications of such a call may or may not have. Lives are at risk. FE has a much older workforce compared to other education sectors. Many are in their mid-50s and mid-sixties and many from BAME backgrounds – groups that are finding themselves more likely to be hospitalised by the virus compared to others.

On Tuesday London Region UCU has called an officers meeting to discuss what steps we need to take to protect lives. Vicky Blake will be one of the speakers. Click here to register.

The NHS is in crisis. Doctors are worried that they are moving towards a situation where they will have to decide who they save and who they don’t.

We must act now to save the NHS and lives.

*Except children of key workers and vulnerable students.

1)     Over 70,000 people have died and daily infection rates have surpassed those reached in March/April.

2)     Cases, admissions and deaths are surging at a time when hospitals are reaching or have passed capacity.

3)     All medical advice, including SAGE, believe hat colleges are sites of contamination and will spread the virus.

4)     The NEU call to advise their members not to return to work and move all teaching online.

5)     Government demands that all January exams to go head.

1)     The government have been irresponsible in their handing of the pandemic by refusing to follow the science.

2)      It is not safe to teach face-to-face in colleges when the infection and death rates are rising so rapidly.

3)     To protect staff, students and our communities remote learning is the only safe delivery model for all except vulnerable students and children of key workers.

4)     Government refusal to scarp exams and replace them with teacher assessment is unfair and will lead to students’ from low-income backgrounds being disadvantaged.

1)     Call on management to move all teaching (except vulnerable students and children of key workers) online immediately and not to return to blended learning until there has been at least a five week decline in infection rates.

2)     Failure of management to implement the move to remote learning UCU advise all members to send in a Section 44 letter to management.

3)     Calls on UCU NEC to support the call to move to remote learning and support its members acting collectively to refuse to teach face- to -ace.

4)     Call on UCU to campaign to scrap all exams and replace them with teacher assessment.

5)     Send a message of solidarity to the NEU for  their stance in challenging the government to force education workers and students into unsafe schools.