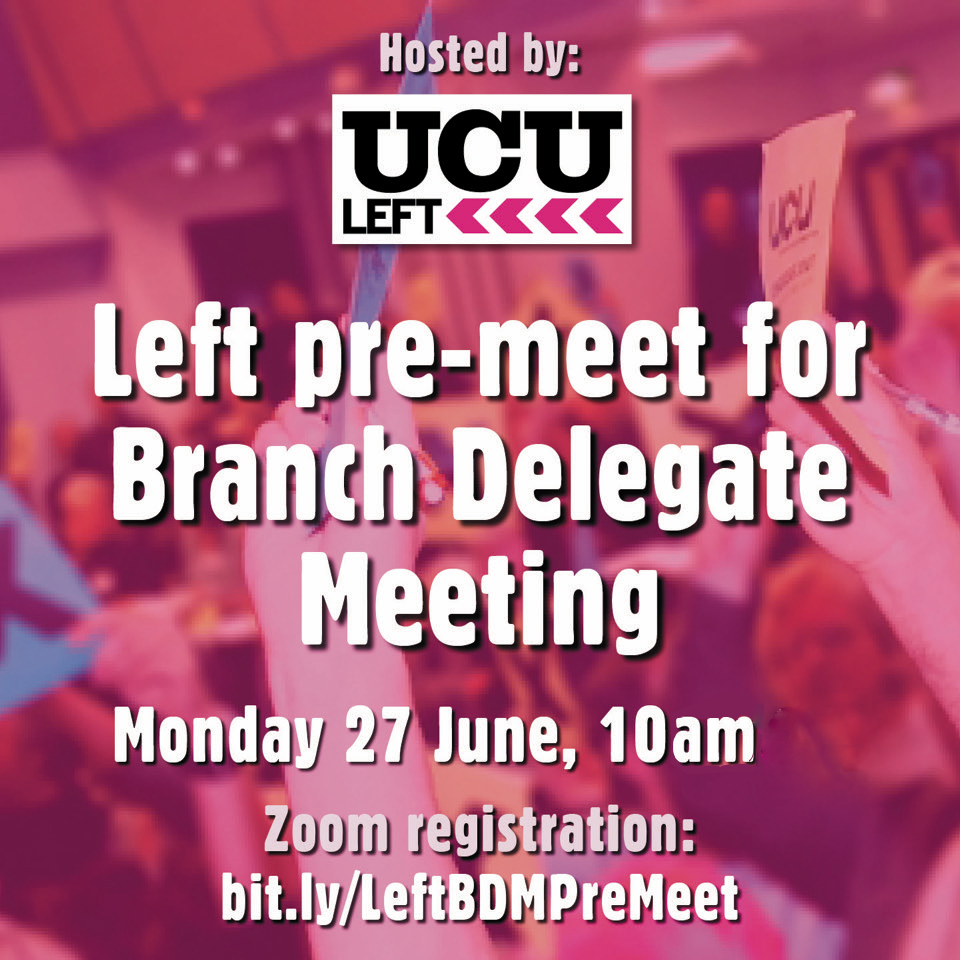 Monday’s Branch Delegates Meeting (BDM) on the Four Fights and USS disputes takes place in a radically different context than even the debates had so recently at UCU Congress.

The strikes by railworkers and the performance of the RMT union’s General Secretary, Mick Lynch, on the media – putting clear and sensible arguments about the fact that working people are suffering in the cost of living crisis, while the employers are still taking in profits – has electrified the trade union movement.

This comes in the wake of the 50,000 strong TUC ‘We demand better’ demonstration last weekend. There is finally a feeling that with postal workers, civil service workers, teachers and others balloting or preparing to ballot, a generalised fightback may be emerging.

The two Tory by-election defeats underline the fact that Johnson’s government has lost all credibility. And a growing number of victories over pay amongst workers alongside the strikes on Network Rail – show resistance can be effective and popular.

According to the TUC, the number of people googling ‘how do I join a union’ has gone up 184%. Just as in UCU, when unions fight they grow.

UCU’s ‘threshold branches’ have demonstrated how effective a marking and assessment boycott can be, many of them winning serious concessions including pay bonuses from management. We now have the chance to take action across the sector in the autumn as part of a generalised resistance to the years of attacks, cutbacks and low pay.

It’s at this moment – when the hopes of so many ordinary people are rising – that our General Secretary and her closest supporters tell us we should put off any attempt to fight until the spring or even later.

Weeks have been wasted following June’s Higher Education Sector Conference (HESC) with no sign of the summer ballots delegates voted for being authorised. There has been no meeting of UCU’s HE officers to discuss the ballot, despite the best attempts of the Vice Chairs of the Higher Education Committee (HEC) to secure one.

Of course a ballot over the summer is a challenge. It would have been far easier if the union had implemented the democratic decisions of the HESC immediately. But even now if the union throws its weight behind a GTVO campaign we can get over the Tory anti-union thresholds in time to hit the employers hard in the autumn, the overwhelming preference of every democratic meeting of the union up to this point.

The General Secretary says that our membership density is too low and that we need time to pause, reflect and build before relaunching our disputes. But 10% inflation is hitting us now, USS changes were made last April, and at universities like Roehampton, Goldsmiths and Wolverhampton the employers’ attacks on jobs and courses is vicious and is spreading.

Do we really want to tell our members that while every other union in the public sector is gearing up to challenge the Tories and the bosses, we want to call our fight off?

Those young and casualised staff, women and black members who are hit the hardest and have been at the heart of our picket lines deserve better than this.

We need the General Secretary to stop putting off the fight and give us the leadership we need. Let’s use the imagination, creativity and commitment of our members to get the vote out, reboot the disputes, and join the growing wave of resistance this autumn.