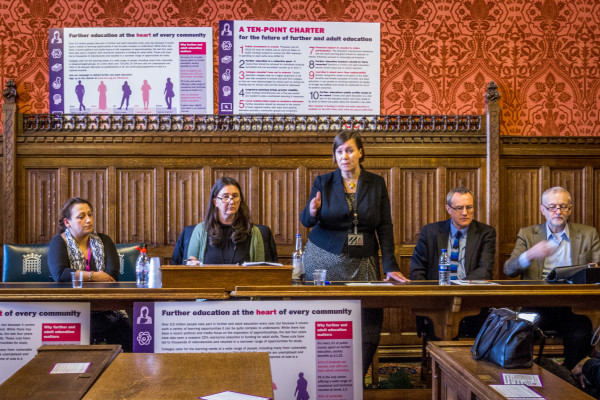 The disappointing re-election of a Conservative government signals further onslaughts on services and working conditions. There must now be a call to arms to the whole of the trade union and labour movement to come together to fight the second wave of austerity that is without doubt coming our way. The Tory coalition’s cuts led to the loss of one million public sector jobs and the dismantling of many services that millions more depended upon. Despite the UK being the sixth richest country in the world, poverty has increased and one million people now depend on food banks.

However, what the general election also revealed is that millions of people not only hate Tory austerity but also want a more radical alternative the one that is on offer from the mainstream parties. The growth in support for the Scottish National Party and the Greens is clear evidence that anti-austerity arguments are popular. Millions of people hated the Coalition’s policies but were not sure if there was an alternative. Now having listened to the case against austerity they liked what they heard. However, it is sobering that in their desperation for an alternative, many turned to UKIP, who got the third highest vote. Thankfully Nigel Farage himself failed to win a seat.

The political establishment has been shaken by the SNP’s tidal wave in Scotland. The Tories very tight majority will mean that their back benchers will feel empowered to dominate the party causing even more rifts and splits. A Tory government relying on the votes of their backbenchers and the Democratic Unionist Party makes them very vulnerable to movements from below.

For UCU this means putting the fight for Post-16 education at the centre of the movement against austerity. At the heart of this movement must be the campaign to save Adult Education. To achieve this we need to frame our campaign within a vision of genuine student-centred education and be prepared to use every weapon in our armoury; lobbies, demonstrations and strikes. 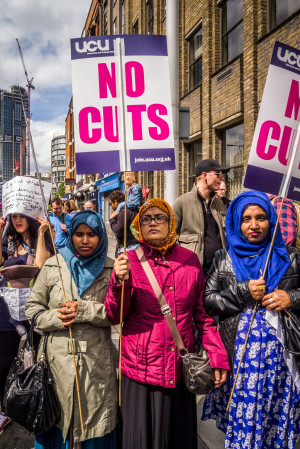 Building a national campaign on the determination to resist

Throughout the last five years the movement has shown the potential to stop the cuts. The mass demonstration in November 2010 against tuition fee rises and cuts in the Educational Maintenance Award (EMA) was the first wave of opposition to the Coalition’s attempt to make working people pay for the bankers’ crisis.

The NUS/UCU demonstration that Autumn broke the consensus that austerity was inevitable. The pension strikes followed and by late 2011 two million public sector workers from twenty nine unions struck together on one of the biggest one day strikes in British history.

Unfortunately we were unable to block the government’s attacks, not because the will and determination was lacking, or because of public opposition. In fact, every opinion poll showed very high levels of public support for the strikes. Rather it was the failure of much of the trade union leadership to organise further coordinated action which demobilised the campaign.

There have been many successful campaigns over the past five years like the New Era Estate campaign to defend housing in East London, the disability activists’ campaigns against Atos and the NUT campaign against Michael Gove. Many workers have been prepared to take prolonged strike action to defend their jobs and services, like Lambeth College, the Doncaster Care workers and the National Galleries strike.

To stop the Tories in their tracks we need more resistance to austerity at every level. But we cannot fight a second wave of austerity college by college, workplace by workplace or community by community. We need a national campaign that unites all these issues into a single mass movement.

UCU must raise its game

UCU punched well above its weight in its first four years of its existence. We took national initiatives over fees, EMA, pensions and pay. The union quickly developed a profile that allowed us to recruit and begin to build stronger branches and regions. However, since the TPS and USS pensions disputes UCU has become far less visible nationally and this is weakening us at branch level.

At the heart of the debate is what kind of trade union UCU should be: one that services members through copious amounts of casework and local grievances – or a campaigning union, mobilising its members around the defence of Post-I6 education. Of course casework and campaigning can co-exist, but unfortunately most of UCU’s leadership is deeply pessimistic about the potential for the union to mobilise its members.

Yet there is absolutely no evidence to suggest members are not interested in campaigning. On the contrary, where leadership has been offered with a clear strategy of how to achieve our aims members have been very enthusiastic to get involved.

One example is the current campaign to save Adult Education. The shock announcement of a 24 per cent cut in the Adult Education budget in February shook UCU out of its slumber and has begun to show how a campaigning union could be built across the Post-16 sector.

Although still far too cautious about getting behind initiatives both industrially and politically, UCU nationally moved to make this issue a central one in the run up to the election and is committed to taking the campaign to the new government.

When the cuts were announced UCU quickly put together a coalition to defend Lifelong Learning involving trade unions and educational and employers organisations. A petition was launched which so far has received almost 40,000 signatories. A #lovefe website was initiated which has a wall of thousands of campaigning stories and photographs. Three early day motions have been written, one of which has been signed by 68 MPs.

In the pre-election period 1,350 members used the campaign page to email 1,700 parliamentary candidates/MPs. The twitter hashtag #loveFE appeared on over 1.1 million device screens with over 3.5 million timeline deliveries during the week of the #loveFE day on 26 March called by the FEC. What has given the campaign its mobilising momentum have been the initiatives taken by London Region UCU. There have been three main events aimed at uniting UCU with the communities our members serve, at the centre of which have been many women migrant workers who attend ESOL courses.

These lobbies and demonstrations put UCU at the heart of the campaign to defend Lifelong Learning and united the community with UCU. The slogan, ‘fight for every job, fight for every student place’ has enabled the union to mobilise students and lecturers. Now we need to deliver the coordinated strike action to back our demands to withdraw the cuts. It is this kind of social trade union model that needs to be rolled out across all sectors of UCU.

This model has three essential elements. We build campaigns with students and communities: we also develop the union as a high profile organising, campaigning one which readily attracts new members, plus we take local and national strike action wherever necessary. There can be no substitute for strike action, which remains an indispensable weapon in our defence of jobs and courses. The most successful examples of this approach in recent times have been the Chicago teachers’ campaign and the campaign and strikes for a minimum $15 an hour among low paid workers in the US.

We are now entering a new political situation. The onslaught is set to continue – we have no alternative but to resist. There is real potential to mobilise millions to stop the second wave of austerity and begin to reverse the terrible damage that has been done. To do that effectively we need a more radical politics – one that fits with the progressive instincts of working people.

This can only be done through building a national movement. Education must be at the heart of this movement. We can start by supporting the amendment to Congress 2015 calling for a national demonstration in defence of Post-16 education. The NUS have just elected a left wing leadership who are looking for partners to call a demonstration, as are the NUT after their Easter conference. A weekend demonstration could see thousands march in defence of working class education.

Alongside this, UCU members in Further and Adult Education are preparing to take industrial action in defence of jobs and education. UCU needs to be on a war footing to ensure that branches taking action have the union’s weight behind them encouraging branches to raise money and send messages of support.

Similarly if we see national action over pay in the next academic year we need to take the same approach and break the employers’ punitive strategy of 100 percent pay deductions that has held back resistance in HE. In FE the demand for ‘£1 an hour extra for all’, framed in the wider fight for more funding, is one that members would enthusiastically campaign for.

UCU could also initiate a mass campaign to defend the ‘Public University’ in HE working with student unions and campaign groups, academics, uniting all those in HE who want to oppose student fees, casualisation and accelerating marketisation of the sector.

This strategy can make UCU visible again, as it has started to do with the Adult Education campaign. It will help to rejuvenate our branches and win battles. Rather than casework dominating branch life we can build branches that are outward looking and can be a beacon of hope and inspiration in every college and university.

6 Replies to “The second wave of austerity: putting the defence of post-16 education at the heart of the resistance.”