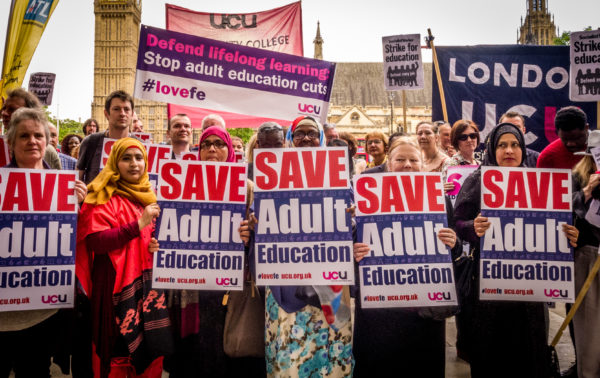 There are moments in political life when those who rule society are exposed. These moments reveal how removed and disconnected they are from the mass of people who they seek to rule over. The outcome of the European Union (EU) referendum is one of them.

Fifty-two percent of the population voted to leave the EU. This is despite the vast majority of the employers, MPs and mainstream political parties campaigning to remain in the EU. Those who voted to remain are understandably fearful of the future as they see Farage being paraded around TV studios gloating over the result.

Cameron said that he would call the referendum in the run up to last year’s General Election as an attempt to keep his right flank in the Tory party on board. Probably not the wisest tactical move ever made! By calling the referendum not only has he opened up the old wounds within the Tory party to such an extent it is difficult to see, in the short to medium term, how they can be healed but also he has opened the door to the possible destruction of the European Union.

What the referendum campaign has also done is politicised society. 72% of the population, around 35 million people, voted. The establishment, who bemoan the fact that working class people do not bother to turn out to vote in general elections, are now castigating the working class for using the referendum to show their rage at an establishment that has wrecked their lives.

It is a disgrace that the first thing that some Labour MPs have done after such a momentous event has been to turn their fire, not on the Tories, but on Jeremy Corbyn. The idea that Margaret Hodge, Yvette Cooper, Hillary Benn or any of the Blairites would be more able to reconnect the LP to its working class base is laughable.

Inside or outside the Labour Party we must do all we can to defend Corbyn from any attempt to oust him from the leadership of the Labour Party. The petition launched by twelve General Secretaries in support of Corbyn is one we should ensure is sent round to all our members. Corbyn must continue to throw his weight behind building the movements against austerity and he must call for a general election now.

Elsewhere I have argued that it was a serious mistake that Corbyn decided to join the Remain campaign. Some of us warned Corbyn that by failing to provide an independent left case for exit the working class in Labour’s heartlands would be left to the racist populism of Farage to give voice to their concerns. If Corbyn and McDonnell had spearheaded a left exit campaign, speaking at rallies up and down the country, tens of thousands would have joined, and we would be further down the road to providing a real alternative to the racist little Englanders.

Let us not mistake the nature of what took place on Friday 24th June 2016; it was a revolt by the working class against an elite they perceive to be responsible for the destruction of their communities.

People entering into social movements against the system for the first time carry with them contradictory ideas; anti-corporate and anti-immigrant. As a leading Russian Revolutionary once warned, ‘Whoever expects a “pure” social revolution will never live to see it.’

Those of us who aim to build movements to defend our communities from the wrecking ball policies of government need to understand that people will hold contradictory ideas and that these contradictions have the potential to be overcome when working people continue to play an active part in shaping their destinies.

As financial markets collapse and there is panic and despair amongst the ruling elite sparked by the revolt of working people we must resist the lure of being pulled into this despair. We rightly, year after year, denounce a system that creates poverty and inequality. When it starts to fall to pieces, because ordinary people flex their muscles, it is not down to us to run to its aid to keep it alive so that we can continue to reform it.

Our task is to build a bigger and stronger movement that can provide an alternative to their divisive and destructive system of inequality and despair.

Was racism the reason why people voted to leave?

Already one of the central explanations that has been offered as to why working class people voted to leave the EU is because of their deep seated racism. The official Leave campaign led by Gove, Johnson and Farage, as well as the Remain campaign, used anti-immigrant racism to win people to their cause. But the majority of working class people who voted to leave are not racists.

The three towns outside of London where the “White British” population is a minority produced large Leave votes.

Although people in London backed Remain more strongly, leave still had strong support among working class people in the capital.

For example, in Newham 47 percent of people voted Leave. The east London borough is one of the poorest and most multicultural boroughs in London, with only 17 percent of the population being “White British”.

The point here is not to ignore or deny the impact the official Remain and Leave campaigns of racism had on turning some people’s fears against immigrants, particularly Leave supporters. But to show that an explanation that starts from all those who voted to leave are racist bigots does not grasp the contradictory nature of the vote and the anti-austerity rage that lay at is heart.

Make our 5th July a day to remember

However we voted we now need to unite (see UCU NEC statement below) to continue to build a movement that offers hope. The first opportunity we have to do this is on the 5th July when hundreds of thousands of teachers will be taking strike action in defence of working class education. This strike takes on even more significance. It will be the first opportunity to demonstrate the unity and strength of the anti-austerity movement in the aftermath of the EU referendum vote.

UCU members in around twenty universities will also be taking strike action on that day. We need to drill this strike down into every community inviting parents and their families to join us on the rallies and demonstrations. At every rally a migrant worker should be invited to speak. Those in work who cannot make the lunchtime protest should organise their own one at work to demonstrate their solidarity with the defence of working class education.

Their system is in disarray. Neither side of the debate have answers to the poverty and pain that working people are suffering except to heap more pain and misery onto our communities. The best response to protect our futures is to do all we can to make sure that 5th July is a mass demonstration of working class unity that has at it’s core equality for all.

The vote to leave the EU has created a political earthquake

The referendum was marred by disgraceful racism and scaremongering over immigration by figures on both sides of the official campaigns and of course by the tragic death of Jo Cox MP.
However millions of people have voted to leave the EU as a direct result of years of austerity and economic decline.

The UCU rejects any attempt to use the ‘Leave’ vote to impose further austerity measures. Post 16 education is already under attack, we will fight any attempt at further cuts as a result of the referendum.

Below is a joint press statement from the leaders of the biggest trade unions in the UK backing Jeremy Corbyn. There is also a petition of confidence in him that already gained over 133,000 signatures within 24 hours of its launch.

A statement from union leaders backing Jeremy Corbyn to continue as Labour leader.

The Prime Minister’s resignation has triggered a Tory leadership crisis. At the very time we need politicians to come together for the common good, the Tory party is plunging into a period of argument and infighting. In the absence of a government that puts the people first Labour must unite as a source of national stability and unity.

It should focus on speaking up for jobs and workers’ rights under threat, and on challenging any attempt to use the referendum result to introduce a more right-wing Tory government by the backdoor.

The last thing Labour needs is a manufactured leadership row of its own in the midst of this crisis and we call upon all Labour MPs not to engage in any such indulgence.