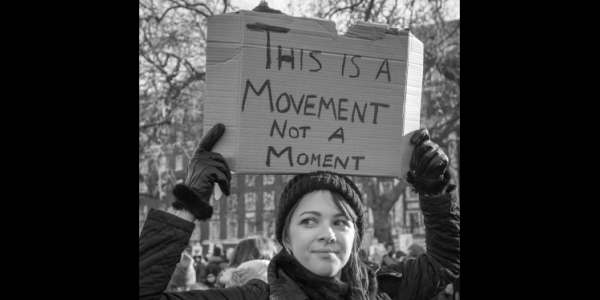 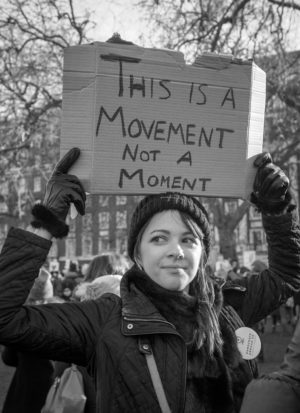 Some demonstrations are more significant than others. Not simply because of their size but because of what they represent.

The response, yesterday, to Trump’s ‘America First’ inauguration speech, a slogan stolen from the American fascists of the 1930’s, was awe-inspiring.

Tens of thousands of women and men around the globe marched to show their rage against the misogyny of Trump. Up to half a million marched in Washington, dwarfing the Trump supporters who turned out to support him the previous day. In London at least 150,000 marched.  A woman carrying a placard read: This is a movement not a moment.

The demonstration in London had a fantastic mix of young and old. History is made up of continuity and breaks. On yesterday’s demonstration, we saw both. There were women who had been on the first ever women’s liberation demo in 1971 marching alongside those for whom this was their first ever demonstration.

Women in Britain have a long history of fighting for their liberation. The demonstration showed how deep the struggle for women’s’ liberation runs in British society. From the struggle of the Suffragettes at the beginning of the 20th century to the fight for control over their own bodies in the late 60s.

From the strikes in 1968 by 850 women machinists at the Ford factory in Dagenham for equal pay, to the strike by 20,000 Leeds women clothing workers.  Women workers from 45 factories in Leeds marched in protest against an agreement made by the union to accept a low wage rise which discriminated against them. To the inspiring Asian women workers at the Grunwick Film Processing Laboratories who stuck over unfair dismissals of colleagues, pay inequality and racist company practices in 1976 .

All of these struggles and many more like them have made the struggle for women’s equality a central aim of any movement for change.

But yesterday’s demo was not just about the past.  A new generation of women have emerged who are enraged at the inequality that exists today. Their rage is against the rise in sexual violence, the continued attempts by legislators to restrict abortion rights and the worsening of the material conditions of women’s lives.

Forty-five years on since the pay equality act women’s pay on average is 14% less than men’s. Women are still more likely to be in low paid and low skilled jobs. 80% of those working in the low paid care and leisure sector are women, while only 10% of those in the better paid skilled trades are women. Recent research shows that 54,000 women are forced to leave their job early every year as a result of poor treatment after they have a baby.

The government’s austerity agenda has hit women the hardest.  They will have shouldered 85% of the burden of the government’s changes to the tax and benefits system by 2020.  Tax and benefit changes since 2010 will have hit women’s incomes twice as hard as men by 2020. Women will be £1,003 a year worse off by 2020 on average; for men, this figure is £555. Women overwhelmingly make up those workers on zero hours contracts. 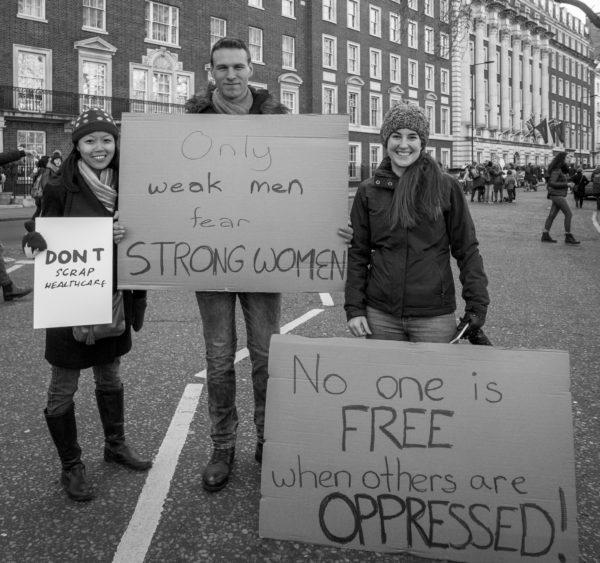 2017 is the hundredth anniversary of the Russian revolution.  One of the first demands granted after the revolution was abortion on demand. A demand we still do not have in Britain today. Leon Trotsky writing immediately after the revolution about how to develop a society anew argues that the key litmus test of how far a society has progressed is how far oppression has ended. He argued when we move towards constructing an equal society that we must all learn to see society through women’s eyes.

Yesterday we did and gained a glimpse of the future where the struggle for women’s liberation and equality for all is as powerful and inspiring as ever.

The fight against racism, sexism, homophobia and all forms of inequality is gathering pace. The Stand up to Racism demonstration in London on the 18th March will the next important staging post in this struggle.