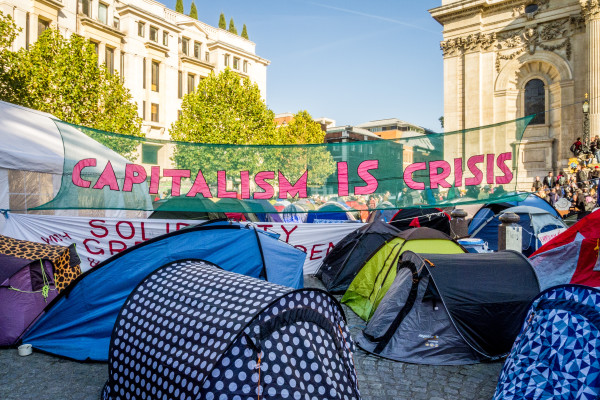 At this year’s UCU Congress delegates voted for a motion calling upon UCU to organise a conference to discuss political representation. The motion said,

‘The situation is now both politically unstable and an historic crisis of failed political representation for working class people….

Therefore instructs the NEC to call for and organise at the earliest opportunity and on as wide a basis as possible a conference of trade unionists, anti-cuts activists and others to discuss proposals for ensuring the proper political representation of working class people and the defence of education and public services.’

The motion was carried by around 80% of the delegates reflecting the widespread concerns amongst UCU members about the state of mainstream political representation in Britain today. UCU is not alone in passing a motion calling for a conference to discuss political representation. The Fire Brigades Union passed a similar motion and other unions are set to discuss the idea at their conferences.

Since the disastrous election result where the Tories won an outright majority, albeit a slim one, and Labour were left reeling from the defeat, many bizarre and ludicrous reasons have been offered as an explanation for why this happened. Leading Blairites and proponents of ‘Blue Labour’ (echoed by most of the media) put it down to two reasons; a hysterical wave of nationalism hypnotising the electorate in Scotland and that Ed Miliband ran a too left wing campaign.

The SNP tidal wave that secured 56 out of the 59 Westminster seats was a class vote and not a vote for nationalism. It was the anti-austerity, anti-Trident and pro-welfare campaign of the SNP that caught the imagination of the Scottish electorate. Scottish Labour were far too right wing to get anywhere near being able to give voice to the visceral anger and hatred of the Scottish electorate towards the Tories and their anti-working class policies.

As for the argument that Ed Miliband was too left wing; does anyone seriously believe that this is why large swathes of Labour voters switched their vote to UKIP in some northern cities or could not be bothered to turn out? It was the pandering to the racist argument over immigration, trying to out tough UKIP, that allowed them, the authentic voice of anti –immigration, to come second place in over 200 constituencies. Many working class people turned to UKIP because they thought, mistakenly, they were an anti-austerity party. Miliband did make some left wing arguments around pay and the NHS but it was far too little and far too late in the campaign to make a difference.

It is quite incredible that Labour could not shake off the Tory argument that it was the last Labour government that were to blame for the deficit rather than the collapse of the international finance system precipitated by the greed of a tiny minority.

The motion passed at congress refers to the ‘historic crisis’ of political representation in Britain. It is important that we grasp the nature of this crisis. Mainstream political parties do not have a god-given right to exist. Political parties reflect moments within the development of classes and social movements.

The birth of Labourism came out of the struggle known as the new unionism at the end of the 19th century. The forerunner to the Labour party, the Independent Labour Party, was formed in Bradford after the defeat of the Manningham Mills strike in 1893. The Labour Representation Committee was set up in 1900 as an attempt to provide a voice for the working class in Parliament. In 1906 the Labour Party was formed after winning 29 seats in that year’s election and by the early 1920s the Labour Party had replaced the Liberals as the main opposition to the Tory Party.

No historical analogy is perfect; however we are seeing a similar process taking place across Europe. The old mainstream social democratic parties have failed to provide answers to the problems that wars, economic and environmental crisis have thrown up. The impact of over a decade of imperialist wars, austerity, climate change and the resistance caused by them has created the conditions for new political formations to emerge.

This is most pronounced in Greece and Spain. The failure of the mainstream political parties to deal with the economic crisis allowed Syriza to win a spectacular victory at the last election by presenting themselves as a radical left wing anti-austerity alternative. Similarly in Spain we have seen the rise of Podemos presenting itself as a radical left wing alternative to the mainstream parties and have found significant electoral success.

These parties’ success in elections does not stem simply from their electoral strategy. They came out of mass social movements. Greece has experienced 35 general strikes since 2008 and the mass occupation movement led by tens of thousands of Spanish youth both gave the impetus for these parties to rise and begin to successfully challenge the old order.

Could it happen here?

To understand the SNP landslide in Scotland we cannot simply look at the two month election campaign. Although the SNP was formed way back in 1934 it was the mass movement for independence that allowed its staggering success. The campaign for the YES camp was young, dynamic and driven by an anti-austerity politic. Without this movement the SNP would not have been able to achieve what it did. Of course south of the border the Labour Party, despite haemorrhaging votes and unable to motivate its supporters to get out and vote, still has a significant connection to the working class via its roots within the trade union bureaucracy. 30,000 people have joined the Labour Party since the election.

However when we look at the contenders for the leadership contest, all tripping over each other to place themselves to the right of the vast majority of working people, it is very hard to see how any of them can get anywhere near reconnecting the party to its working class roots. Jeremy Corbyn’s announcement that he will enter the competition is a welcome development but unfortunately he is unlikely to get the support of the thirty-five MPs needed to get his name on the ballot paper.

The one million votes for the Green Party, who campaigned on a clear left wing platform, demonstrates the potential mass audience for such a radical left wing party that can begin to represent working class people’s real aspirations of justice and equality.

Increasingly the old mediating structures of civil society can no longer channel the frustrations and fears of its population. Political parties, the Church and the Monarchy, which at one time did act as safety valves for the anxieties of the majority, are now unable to do so. They have been exposed as being out of touch and corrupt.

Providing a space for debate and discussion

The process of fragmentation of the political bases of the mainstream political parties is underway. The epoch we are living in will continue to produce seismic events like crisis, wars and revolts against them. This will deepen the crisis of political representation in Britain as these organisations are unable to provide solutions to these events. All will try and make ordinary working people pay for the problems of an anarchic system increasingly spiralling out of control. This, in turn, will make the cry of ‘they don’t speak for us’ become one that is echoed by millions.

This despondency does not have to turn into despair and cynicism toward politics and political parties as long as we move quickly to provide a space for these concerns to be discussed and debated. This is why the motion passed by delegates at this year’s Congress calling upon UCU to call a conference to discuss this issue is so timely.

No one can or should say in advance what a new political formation should look like. This should not be a conference that declares the setting up of a new political party. Some will argue that a strategy to reclaim Labour is our best chance. Others will argue that setting up a new organisation or forming an alliance of different organisations to support electoral candidates who sign up to particular policies are the best ways forward. This is the debate we need to have with the broadest possible cross section of the movement.

What we must insist on, though, is that this debate must be part of building a movement of resistance against austerity. Attempts to decouple discussions about political representation from building a mass movement against austerity will only lead to a sterile debate. Any new political formation, if it is to succeed in providing a new home for working class people, must be organically linked to their struggles.

UCU‘s call for a political representation conference is not only timely but urgent.

10 Replies to “They don’t speak for us: the need for a new political representation.”