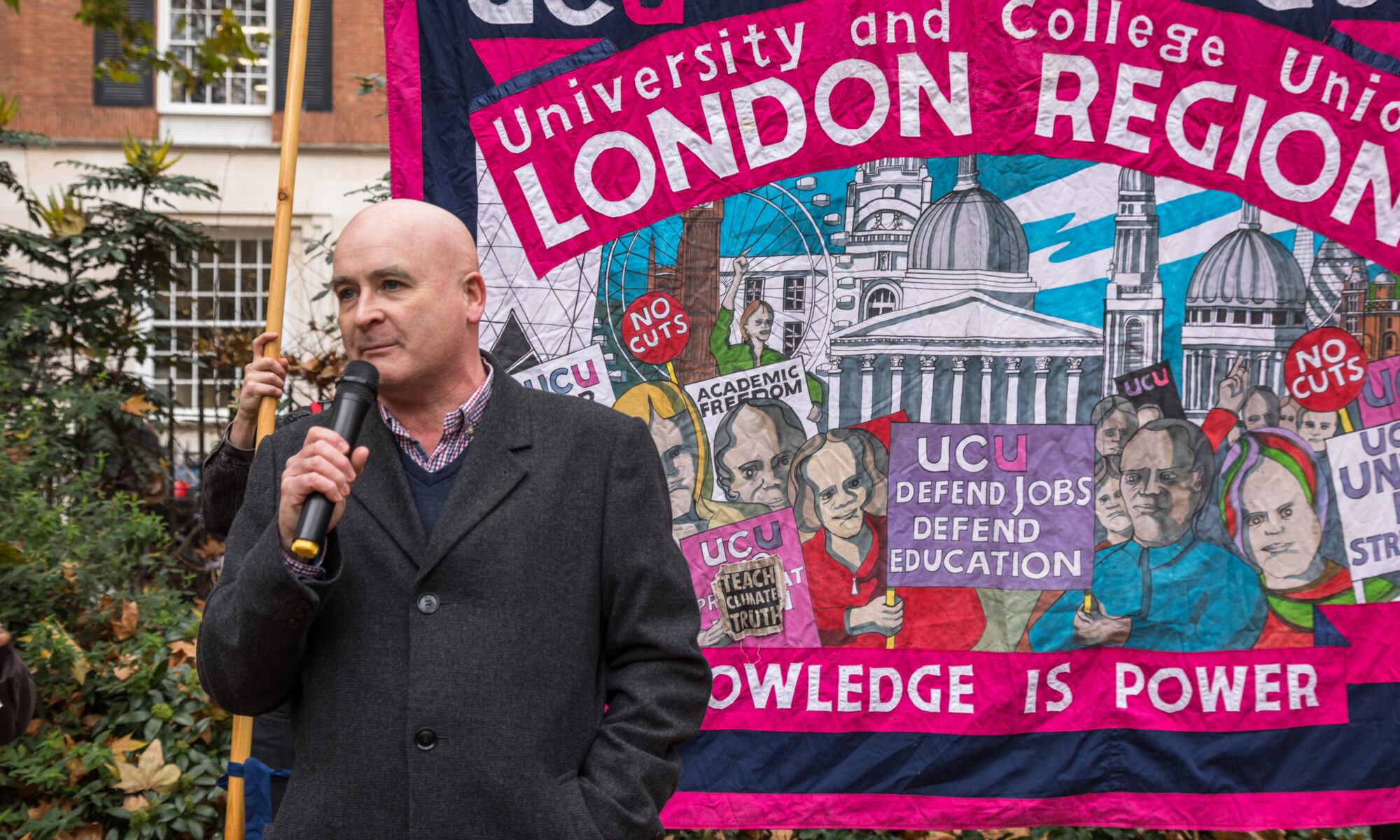 UCU members will need to get organised to win the ballots in Higher Education. After the UCU Rising campaign on Wednesday 10th August, it’s all hands on deck to deliver the hard-hitting, ‘transformative’ campaign promised by UCU HQ.

We are in the middle of a huge fight over pay across every sector across the UK, from education and transport to communications. People are not falling for the lie that wage increases cause inflation. The government stood by and allowed oil giants to hype fuel costs, triggering price increases across the economy. Headline average inflation of more than 11% understates the impact on ordinary people, with up to 50% increases in supermarket prices for vegetables and staples.

RMT leaders Mick Lynch and Eddie Dempsey have become overnight celebrities for speaking the plain truth: workers have no choice but to fight for a pay increase that keeps up with inflation. Cuts in pay for skilled workers reverberate across the economy. If salaries fall, without workers’ spending, jobs and pay in service sectors will be trashed. The RMT and CWU are leading the fight, and millions can see it.

But other unions need to organise to bring workers out on strike. Indeed, we cannot afford to ignore threats to the right to strike by Conservative Party leadership candidates. The Tories are gambling on taking on all the trade unions at the same time – something that even Margaret Thatcher never dared do.

Alongside the other HE trade unions, UNISON, GMB, EIS and UNITE, UCU has rejected the paltry 3% pay offer from the HE employers. All bar one have declared a dispute, and UNISON has already begun to ballot for action in the autumn.

Against RPI, this ‘increase’ is equivalent to permanently slashing pay by almost 3 grade points, or half a pay grade. We can’t afford to accept this.

Following robust campaigns and ballots, elsewhere workers have been winning higher increases. Leading the way is UNITE. Among other successes, UNITE was able to raise airport workers’ pay by 21% at Gatwick and 10% at Glasgow. In FE, UCU has won an uplift of £2,668 and a £500 one-off payment at Hugh Baird College in Liverpool after threatening strike action. So far some 35 FE branches have live mandates for industrial action after being offered increases around the 2.5% mark.

A series of unions have won ballots and are already taking action, including the RMT on rail and underground, train drivers in ASLEF, and the CWU communication workers. Even without a union, Amazon workers are staging wildcat walkouts over pay. Other unions, including the NEU schoolteachers, and UNISON in HE have announced ballots in the autumn.

This is the context for the launch of the union’s ‘UCU Rising’ campaign. The UCU leadership has accepted something that union activists have been telling them for years: you have to campaign ahead of a ballot in order to win it. You also have to lead from the front to give members the confidence that you are serious.

We have exceeded a 50% turnout in aggregated ballots in the past. In 2005, just before UCU was formed, General Secretaries Sally Hunt and Paul Mackney toured union branches to convince members and reps that their respective national unions wanted to win the ballot. The result was a turnout of around 54% in each union.

Similarly, the 2017-18 USS ballot in pre-92 reached a turnout of 56% overall. The key ingredient was a political campaign among members that mobilised reps and activists to win the argument that now was the time to fight – and vote.

So the fora and webinars with Jo Grady announced by UCU to launch the dispute are welcome. We need more than leaflets and posters when members are mainly working online. We need to create impetus over the summer even if many are on leave. The union needs to set the clear expectation that we intend to win this ballot.

One might think that given the scale of the attacks and this wider groundswell and enthusiasm for unions like the RMT, winning a ballot in HE would be straightforward. But there are underlying concerns among members.

First, there are unresolved questions about industrial strategy. Members need to know the union is serious about taking the kind of action required to force up offers over pay.

Last year the union called strike action on dates which had limited impact on the employers, and did not increase pay offers at a national table. In some cases strikes were in Reading Weeks or out of term-time, meaning that no leverage was placed on the employers’ ability to access their primary source of income, students.

On the other hand, branches were able to deploy marking boycotts extremely effectively, but with a local impact. Organising on a rank and file basis, with no real support from the centre, union members learned they had real leverage over their employers, and displayed true grit in standing up to employers’ pay deduction threats. One after the next, the employers negotiated local agreements to end the action. But strong action in a minority of branches was insufficient to shift the employers nationally.

It is clear that the UCU leadership expected the marking and assessment boycott campaign to fail, and understated its success because they stood aside. We all know its limitations. But we cannot ignore the fact that it exposed the weakness of the employers who annually threatened 100% pay deductions since 2006. With the exception of Queen Mary University of London, the employers did not impose 100% pay deductions: only at Goldsmiths and the RCA were any deductions for boycotts made.

A marking boycott is not a panacea, and we cannot afford to wait until critical marking periods next year to fight over pay. We will need to win a second autumn ballot in any case. But the lesson is clear: if we are prepared to take hard-hitting industrial action we can win. We need to apply this lesson to our strike action strategy.

The second issue concerns our own organisation: we will need a serious effort to drive up the turnout.

The ballot will be aggregated across all employers, over seven weeks.

The last time UCU ran an aggregated ballot in HE over pay, ending in February 2019, the turnout (41%) was an almost replica of the previous disaggregated turnout (average 42%). Then in the autumn of 2019, a return to disaggregated ballot and a combined ballot envelope (USS, pay) pushed up turnout to an average of 49%, and 57 branches were able to take action. In the last year, average turnouts were at, or just below, 50%. This is too close to call.

As we noted above, the last time we beat the 50% turnout by a comfortable margin across pre- and post-92 was in 2005-6, just before the merger. We know what we need to do: campaign across the entire union to increase participation.

Along with pay, the USS dispute is also clearly winnable. The changes railroaded through on 1 April cannot be justified. USS is taking ‘deficit recovery contributions’ amounting to one fifth of all payments into the scheme (over half a billion pounds a year) when their own monitoring assessment of the projected deficit says these contributions are no longer required. This is theft on a grand scale, and these payments should be paid into member benefits and the cuts reversed.

We need to rally members to get behind this campaign now.

We can expect to get a clear timeline this week, so branch officers and reps know what they need to do when. The campaign should start now, well before ballot envelopes hit doormats and pigeon holes.

There are a range of tasks to be worked through from ‘GTVO preparation’ to organising rallies to launch the ballot. Activists are asking what they can do to help. We should treat every member as a potential activist, asking them to call meetings in departments timed for when the ballot begins.

Members are extremely angry. They need to know that the union is serious about winning these parallel disputes. It is never more true to say that we are in the fight of our lives!

It is time to get organised.