This year’s TUC took place four months after General Election that the Tories almost lost.  Jeremy Corbyn came within a whisker of beating Theresa May to become the Prime minister of Britain with one of the most radical manifestos in Labour history.

It wasn’t to be but it was an election that changed everything. The election made clear that working people want real progressive change and that they were fed up with the tweeddle-dee and tweedle-dum politics of the past.

The Tories are deeply divided and have to rely on bought DUP votes to survive.

Corbyn gave an inspiring speech to Congress urging trade unionists to fight over pay, arguing that migrant workers are not to blame for low wages and called upon young people to join a trade union. 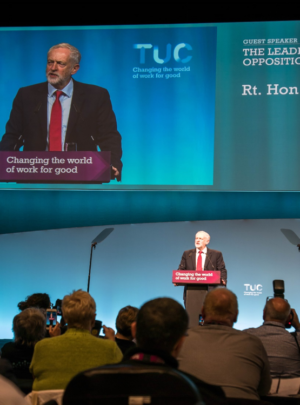 It was in this context that congress debated a broad range of issues from climate change to the decriminalisation of sex work. Congress also took place a few weeks after the first ever strike in British history by McDonald’s workers.

Their strike had a tremendous impact on delegates. Mick Cash, RMT General Secretary, spoke alongside McStrkers at an inspiring fringe meeting organised by UtR.  It was a real shame that the TUC did not allow the McStrikers to speak to congress.

It would’ve been very easy to find time on the congress agenda to allow them to speak to delegates. It was a real missed opportunity and a reflection how far the TUC still has to go to being able to relate to young precarious workers.

Pay – the mood and appetite is there.

One of the key debates was over the government’s pay cap.

A motion proposed by Dave Prentis, UNISON General Secretary, and seconded by Mark Serwotka, PCS General Secretary was passed unanimously. It called on the government to scrap the public sector pay cap and for the TUC to organise a national demonstration and to coordinate industrial action in pursuit of fair pay for all.

Mark Serwotka warned of the dangers of allowing the government to divide the movement on pay—lifting the cap for some but not for others. He explained how the PCS is running a consultative ballot of its public-sector members in October. Dave Prentis also made it clear that if the government didn’t lift the cap for all then he would look to organising industrial action to force the government to comply with public sector workers demands. 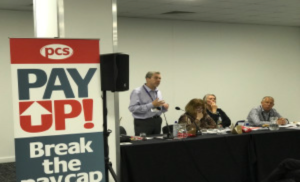 Speakers also acknowledged the challenge that the new government thresholds on balloting are likely to have on achieving a legal ballot.

But delegates argued that the trade union movement must not be bullied or intimidated by the new government legislation.  By linking up with Jeremy Corbyn and John McDonnell, inviting them to speak at pay campaign rallies of those unions that have ballots, would help to smash through the 50 percent threshold.

Serwotka and others also pointed out we have been here before. Great motions passed—but they have not been implemented. We must turn these words into action. If we don’t the appetite and mood for a coordinated fight will dissipate and the Tories will be let off the hook.

One of the key debates was around a motion submitted by the Lecturer’s union the UCU proposed by Sally Hunt.

The motion argued that the trade union movement should support the free movement of labour. In her speech she made a passionate case for why immigration is not to blame for the ills of society and argued that it was the employers and not migrants that were to blame for poverty pay.

There was an attempt by the CWU and UNITE to oppose the motion on the grounds that free movement of labour was not possible to achieve so instead we should lower our aspirations to a more unspecified demand.

Despite this opposition the motion was passed overwhelmingly.

This is a very important moment for the labour and trade union movement to make clear that it supports a motion that has as its foundation a genuine internationalism that makes clear that we will not allow the racism of Trump and May to divide us.

Everything has been set up to bring about a massive wave of industrial action to defeat the Tories pay cap on public sector workers. Pay has been and still is the central economic lever that allows government and employers to make us pay for the financial crash of 2008. 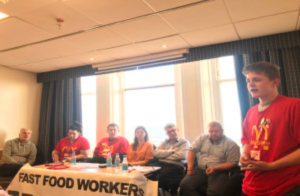 The trade unions must seize this moment to ensure that we halt the Tories attacks in their tracks and unite the whole of the movement behind ushering in a real alternative to austerity represented by Corbyn and McDonnell.