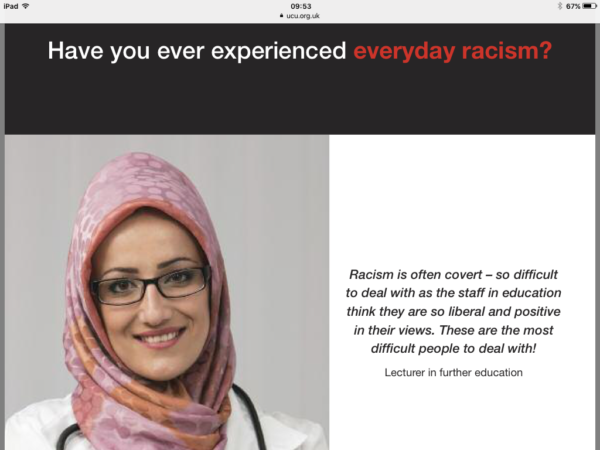 MB: How did the idea for a day of action on workplace racism come about?

“Among the Black Members Standing Committee (BMSC) it was felt that race had fallen off the agenda within our institutions and, even to some extent, within the union. In the aftermath of the Macpherson/Stephen Lawrence report (1999) there seem to be a concerted effort to tackle what was widely acknowledged as institutional racism within public bodies and institutions and legislation was strengthened by means of the race relations amendment act (2000). Winding on 16 years and many of the lessons previously learned have been forgotten. The BMSC produced a survey that over 600 black members had returned that demonstrated incidents of racism were still prevalent in our institutions and many of the barriers to career progression were still very much in place.

The day of action is therefore the beginning of a process of raising awareness of workplace racism in its many forms and engaging the entire membership in a discussion of how we can effectively challenge it.”

MB : What does the Black Members’ Standing Committee hope to achieve with the day?

“I think the key aim for the day is to reinforce the fact that workplace racism can only effectively be tackled by the membership collectively. Too often black members are left to challenge racism individually by means of case work and as nearly all experienced reps will tell you proving a case of discrimination is very difficult. We need to be calling our managements’ out for practices and procedures that disadvantage black members. We would hope to give confidence to both black members and branch officers to raise incidents of racism in their local branches and associations and for the wider membership to feel empowered to support those affected.”
MB: What would you like branches to do for the day?

“We would like branches to do anything they can manage to mark the day and to begin an ongoing discussion of how we make permanent change. Branches could call a meeting to show the ‘Witness’ film produced by the union and use the worksheets provided to prompt debate. We would like to challenge members to think of ways we can maintain a focus on improving the lives of black educators in FE and HE. There will also be the summary of the BMSC survey available and we hope that officers could provide copies for members to take away. It would be great if we could also get feedback on the day in the form of solidarity pictures or suggestions for further events.”

MB : How do we explain to members who don’t understand the issues that there is still a problem of racial inequality?

“I think that the film and the survey report will go a long way to helping members understand that there is still a problem of racial inequality in colleges and universities.”

MB : What can UCU do to tackle racism in colleges and universities?

“I think UCU can help fight racism in our institutions by engaging with black members in a far more meaningful and understanding way. This means at national level placing equality at the centre of our work, framing industrial campaigns around the needs of all our members including those who face all the difficulties thrown at us by our managements as well as the isolation that discrimination brings. At local and regional level UCU should continue to develop black activists networks to help inform policy and practices from branch level upwards and to bring on more black officers at all levels of the organisation. Training is also key to the fight. I attended an excellent training event in London, at Carlow Street last November aimed purely at new black activists’ training which was over subscribed and is now being rolled out across the country.

*** The film, Witness, commissioned by UCU and initiated by the UCU Black Members’ Standing Committee, chronicles the experiences of the union’s black members and was featured in an article in the Guardian on 4th Feb 2017.

Branches can support the Day of Action by organising a showing of the film this Wednesday lunchtime, using the link and Anti-Racism materials on UCU’s website:

Day of action on workplace racism this week – Wednesday 8 February

3. # we are all immigrants 27 February students and UCU teachers events in colleges by embedding immigration history into curriculum areas, theatre, art , poetry.

4. Campaign to defend freedom of movement across Europe, post-Brexit https://freemovementlabour.wordpress.com/