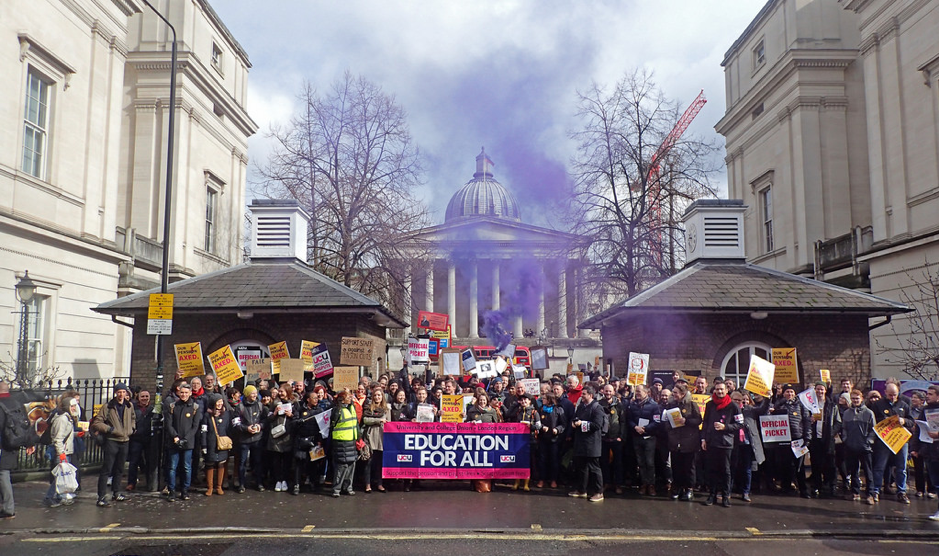 What a week! In less than 24 hours after a terrible offer was announced, a mass lobby of over thousand UCU strikers outside the emergency HEC/branch delegate meeting, forced the leadership of the union to reject the offer and continue the strike.

The hashtag #nocapitulation was soon tweeted far and wide alerting members to the awful offer.  Thousands of lecturers, academic related staff and post graduates met on picket lines and in open-air meetings and debated the offer. By the time the HEC had started their meeting 47 out of 64 institutions that were on strike had met and rejected the deal.

This was a revolt of the rank and file the likes of which we have not seen since the Great Miner’s strike of 1984-5.

What this week has shown is that things can change incredibly quickly. What can appear to many trade union activists as a passive and even demoralised working class can transform – springing into action and leaving established activists running to catch up.

The 13 elected commissioners, which I was one, have just finished making recommendations on effective industrial action. The commission was set up by the General Secretary at the last UCU congress in the aftermath of the disastrous pay campaign. A campaign that was so badly led it gave confidence to the employers to go on the offensive to rip up the USS pension scheme.

It is ironic that the commission has just finished at the same time as the most effective national strike action the union has ever seen! The recommendations are good.

They are strike centred and hold up well in light of the present action.

During the course of drawing up the recommendations, which started in November, we heard from many different academics and branches who fed their ideas into the commission. Whilst most understood the need to put strikes at the centre of what would make effective industrial action there were some who did not.

Some put forward the idea that that we live in different times. They argued that the great set piece industrial battles of the 1970s didn’t fit anymore. That we live in a post capitalist age where working people do not wield the power they once did. Even the term ‘working class’ didn’t fit and certainly not in the context of the higher education sector we were told.

It is fashionable today to explain why the working class don’t display the kind of militant action as in the past. Society, it has been argued, is divided between the ‘salariat’, a section of the working class that have a vested interest in the system and the ‘precariat’, workers on casualised contracts who are kept out of full time employment not only by the employers but with the connivance of the ‘salariat’.

This strike has blown all these theories right out of the water. A sector which does indeed have workers at different ends of the wage structure and some on very secure employment contracts whilst others on very insecure ones have united on the picket line.

In fact the most striking aspect of this industrial action is how much it resembles the industrial battles of the 1970’s. From the mass pickets, the open-air mass meetings and the setting up of strike committees. The solidarity shown by students going into occupations and the mass lobbying of the national executive to stop the strikes being called off could have all come out of a manual on how to organise an effective strike from the 70’s.

I would thoroughly recommend reading an interview with Arthur Scargill the Miners leader in New Left Review from 1975. Arthur Scargill: The New Unionism. New Left Review I/92, July-August 1975. It gives an inspiring account of how the miners organised themselves and inflicted one of the most important defeats on employers in British history.

Whilst we aren’t miners, they had the economic power to ‘turn the lights off’ and halt production right across the country, we can learn a lot about how they organised to become one of the most powerful sections of the working-class movement.

Building a strike movement that can win

What is done in the universities in the next couple of weeks before the second wave of 14 days of action is going to be crucial. Going back to work after such an inspiring two weeks of action can take the steam out of the momentum of the strike. Activists as they go back to work are now showing the kind of creativity inside work as they did on the picket lines to keep the campaign alive. At one meeting I attended last week a striker spoke about how she is going to organise lunchtime meetings where workers can come along eat their lunch and talk about how they can prepare for the next wave of action.

It is clear from debates at the meetings and picket lines that strikers are focussing their demands on the employer to ensure that more is won and to force them to break from UUK’s position. A striker at the London strike rally last Wednesday argued that whilst the petition demanding the government under-rights the pensions scheme is important, it mustn’t be allowed to distract from the central task of taking the fight to the employer.

Seven universities have passed a motion calling on the union to adopt the position of ‘Status quo’. If we are to avoid another attempt to sell this dispute short we need to win as big a side around this position as possible.  The central reason why there was such anger over the deal was because many strikers know there is not a deficit. This is why activists are calling upon branches to support motions calling for the status quo.

Some universities have regular strike committees. The strike committee needs to become the centre of the organising and debates around the issues of the strike. UCL has a strike meeting every day in the afternoon. It discusses how the day went and what to do about any weaknesses.

In FE 13 colleges will be taking a further three days of action on the 27, 28th and the 29th March. We are learning a lot from colleagues in HE. The possibility of opening up a second front of industrial action is real. In FE there are 148 colleges that have submitted 168 claims. That is just under 50% of the total bargaining unit in FE. The claims are over a range of issues from pay and workload to fractionalisation and equal pay. Not all will end in branches taking industrial action. But many could move in that direction very quickly.

There are branches in FE and HE that have different experiences and levels of organisation. We need to move quickly to try and generalise what has worked well and what hasn’t. This is why London Region UCU has called a UK – wide activist meeting for the 28th April to listen and learn from each other about how best to ensure we win.

History has taught us on more than one occasion that when the working class moves it does so very quickly and new formations and ideas about how to effectively organise against the employers come to the fore.

We must throw caution to the wind and embrace this new potential.