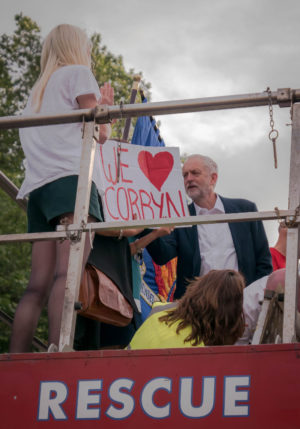 The attempt by Labour MPs to oust Jeremy Corbyn is an act of betrayal.  He won 59% of the vote in the leadership contest last year, has attracted tens of thousands to the Labour Party and has inspired a new generation to become engaged in politics.

At a time when the Tory Party is riven with splits and infighting the whole of the labour and trade union movement should be united in launching a campaign to drive them out of office to defend working people from the avalanche of attacks that are being prepared.

Those MPs that are attempting to undermine Jeremy Corbyn’s democratic mandate have shown their complete and utter contempt towards the millions of working class people who see him as a breath of fresh air in an age of plastic politicians. Corbyn is alone among party leaders in taking a principled stand in support of refugees and migrants and was one of only 48 Labour MPs to vote against the Tory government’s welfare reforms.

The idea that those who are standing against Corbyn can re-connect the Labour Party to its working class base are delusional. The MPs, who lost over 5 million votes, say that he does not have the ‘leadership’ qualities to win a general election. Many of these MPs are the ones who supported wars, austerity, privatisation and pandered to lies about immigration – in short Tory–lite policies.

The media attack on Corbyn ever since he was elected as leader has been unprecedented and has risen to new levels. They, like many of those MPs who are trying to remove him, are fearful not that he will lose a general election but they are afraid that he will win.

This political crisis that has erupted in the Labour Party is not about an individual it is about what he symbolises.  Jeremy Corbyn represents opposition to privatisation, austerity, racism and the opposition to illegal wars. He stands for a planned economy, equality for all and peace.  All polices that UCU has supported from its inception. When he spoke at the Cradle to the Grave Conference this year he outlined an exciting vision of a post 16 education system which is free and has open access to all and without competition and the market.

This why as UCU NEC and standing committee members we call upon all those in the labour and trade union movement to get behind Jeremy and condemn those who are trying to undermine him and all that he represents.