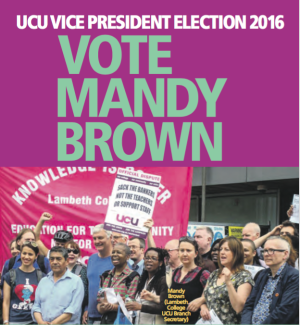 In HE the teaching excellence framework threatens job security, progression and academic freedom. This in the context of a glaring disparity between the cash-rich Russell group universities and those traditionally committed to widening participation which has become a gulf threatening the very existence of some institutions. This is at the heart of the current dispute at London Metropolitan University, which every member needs to get behind.

The second HE Convention on Saturday 27th February in London, organised together with Council for the Defence of British Universities and the Campaign for the Public University, is a must for all those who want to understand what is going on in HE and want to organise in its defence. See https://heconvention2.wordpress.com/paper-and-convention for more details.

In FE, on top of round after round of restructuring and redundancies, the area reviews will mean more mergers, course rationalisations and job losses, with yet fewer educational opportunities for students.

After last summer’s savage cuts to ESOL provision in many FE colleges– despite long waiting lists and the obvious needs of refugees, migrants and marginalised communities – the government’s threats to scrap maintenance grants and introduce loans threatens the viability of many courses and would force thousands of students into debt. A great opportunity to come together with a range of activists will be the conference organised by UCU, NUS, the Learning and Work Institute, NATECLA and Action for ESOL in London, Defending Further and Adult Education: Shaping the Future on Saturday 5th March at SOAS, Central London. Tickets and the programme are available here; https://www.eventbrite.com/e/defending-further-and-adult-education-shaping-the-future-tickets-20057125402

In both sectors casualization is rampant and staff pay has been driven down by over 18 percent since the crisis of 2008. It was disgraceful that last year the majority of HE NEC members opposed any effective pay campaign, despite strong opposition from UCU Left supporters.

In FE, where UCU’s national elected leadership (which has a left majority) have implemented conference decisions to oppose our pay cuts, we must build a vibrant pay campaign this year alongside Unison who have also rejected the derisory pay offer from the AoC.

Thousands of jobs have been lost in recent years in both sectors, despite the often successful fights by local branches to block management programmes of compulsory redundancies. Workloads have continued to escalate, sickness rates have rocketed and staff burnout is common.

The Tory Trade Union Bill is intended to ramp up the already drastic anti-union legislation in the UK and make it even harder for workers to fight back against austerity, cuts and privatisation such as the current very well-supported and popular strike action by junior doctors. UCU must be part of the trade union movement’s opposition to the bill and the TUC week of action from 8th – 14th February must see a major escalation of our resistance.

The anti-austerity mood which swept Jeremy Corbyn to a landslide victory in the Labour Party leadership election last summer, and which we saw in the massive wave of solidarity for refugees before Xmas, needs to be focused in a movement capable of defending education and all our public services. As a major educational union UCU also has a major responsibility to oppose the growing racism and Islamophobia we see in the UK and across Europe.

Our union needs to be at the heart of anti-Tory, anti-austerity action and that means making sure we elect those to the national executive and the union presidency who are committed to mobilising all the campaigning weapons we have at our disposal, including national strike action, to defend educational provision and staff pay and conditions.