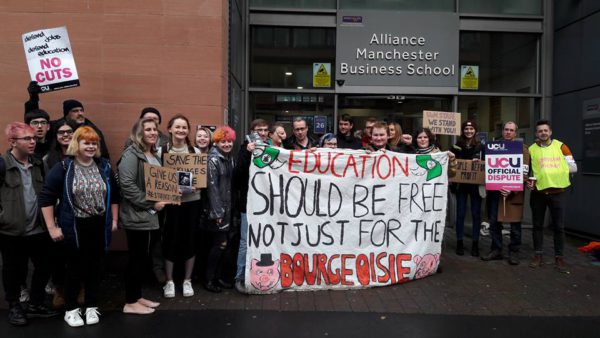 University of Manchester UCU held a thoroughly successful strike over compulsory redundancies on the 23rd and 24th of October. The strike saw the biggest picket lines at UoM in recent history, and great support from the students’ union – including a roving march of students which visited every picket line. The rally was packed out with strikers and supporters. The mood was defiant and determined.

University management are trying to force through over 140 redundancies, in areas including Business, Languages and Biology. The reasons given include gaining financial headroom (despite £1.5 billion reserves), and becoming a ‘more elite university’ (presumably through making the university look a shambolic unappealing place to work). In reality it’s just the tired old business agenda in HE, putting the possibility of short-term gains above the interests of students and education. Certainly there is little interest in the outcomes for staff, who are treated with contempt.

Management are still refusing to back down over the threat of compulsory redundancies and there have been numerous stories of staff facing extreme pressure to sign up for ‘voluntary’ redundancy. This has led to a huge growth in UCU organisation on the ground, with over 140 local reps, and a 58% turnout, 87% vote for strike action in the recent ballot. Members are fast becoming frustrated with the endless process of meetings intended to wear down opposition.

Hopefully the strength of feeling shown on the pickets will be enough to make management see sense and back down. If not, the branch are confident of delivering further action in the near future.

The recent successes of the UCU branch at Manchester Met against the compulsory redundancies at Crewe Campus have renewed members’ confidence in our ability to fight back. MMU UCU scored significant gains and fought off the mass attacks last summer, but the dispute is ongoing. Not only are further redundancies expected this year at Crewe, but the MMU management is now openly talking of a new round of redundancies in the MMU Business School based in Manchester. What this has opened up is the possibility of combined campaigns and strikes. When the two Manchester VCs were interviewed together before the summer, what they did not bargain on was the two UCU branches taking up the struggle together.

As UCU moves closer to action on USS, branches such as University of Manchester and University of Leeds are showing that our strength lies in standing together and fighting together. This is a strong foundation for the struggles we are still to face in the defence of education.