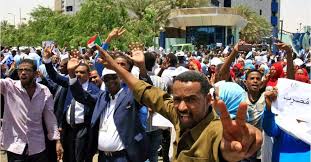 Sudanese military and militia forces are attacking the sit-in outside the Army Command in Khartoum, where thousands of protesters have gathered since 6 April to demand a peaceful transition to civilian rule, the Sudanese Professionals Association said in a statement this morning, killing and injuring many and setting tents on fire. The attack follows a general strike on 28 and 29 May after the Transitional Military Council refused to concede protesters’ call for a new sovereignty council composed of a majority of civilian members.

Solidarity is crucial – what you do in the next few hours will make a difference.

Statement from the Foreign Relations Committee of the Sudanese Professionals Association

In the early hours of today, Rapid Support Forces backed by security forces and Police stormed the sit-in area in front of the headquarters of the Sudanese army in the capital Khartoum. Fire bullets were used excessively and injured several unarmed citizens; uncounted numbers of them are dead. The raiding forces burned the tents in the sit-in area and used excessive physical force against the protestors. The raid and attacks against civilians are still ongoing in an attempt to break and disperse the peaceful sit-in

We consider this violation a criminal offence against the Sudanese people, and a total reversion to the old regime’s tactics and policies.

The Sudanese revolution will continue and shall prevail.