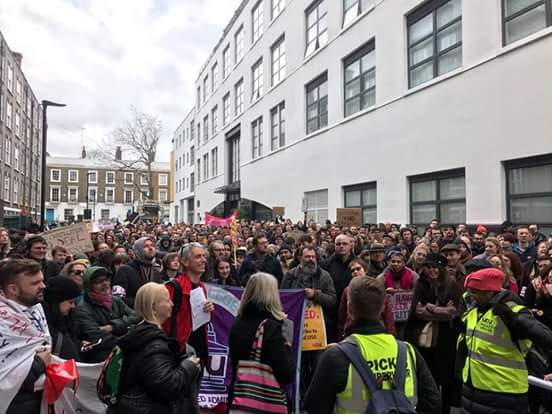 What’s the way forward in the pensions dispute?

Don’t pay more to get less: agitate for status quo

The scale of the mobilisation by UCU members in branches across the country to reject the deal which emerged from negotiations on Monday 12 March should leave us in no doubt that activists are not prepared to accept a shoddy compromise to settle this dispute. A return to ‘status quo’ in the USS scheme (ie no cuts for us, and also no extra contributions by employers) is the line that our negotiators should be taking now. Members understand the deficit is manufactured, they understand that the scheme is both affordable and sustainable in the long run and they understand the analysis of a deficit is wholly dependent upon accepting government policy, through Quantitative Easing to the Pension Regulator’s long-term valuation methodology designed to destroy pensioners ability to live in retirement. Members need to be encouraged to sign the petition calling on the union to fight for the status quo

Breaking the unity of the employers

One of the most interesting aspects of the dynamics of the dispute so far has been the way in which local branches have often very effectively forced their individual institutions to break publicly with the UUK line through the strength of their action on the ground. Without falling into the trap of opening local negotiations on the national dispute, we can demand that VCs accept a higher level of risk, or lobby for a government guarantee to USS or pay our national claim in full.

Cambridge provides a good example of this process, whereby determined and escalating mobilisation by UCU members at a local level, which was developed in coordination with the SU and student activists, has forced important concessions from a recalcitrant administration. These are of both national and local significance: the latest statement from the Cambridge VC is a direct call on UUK to change its position, and concedes that Cambridge staff cannot be required to reschedule ‘without compensation’ and commits to no pay docking for ASOS. There is still some way to go before the Cambridge position is in line with what would be acceptable to UCU but these are clear concessions, wrung from senior management through a mass mobilisation by students and staff on a scale that the university has not seen for decades. There is no doubt however, that these developments in Cambridge would not have come about without the backdrop of the national strike, and in particularly the powerful effect of the rejection of the UUK-UCU proposed deal on 13 March.

The threat of further strikes during the examination period needs to be quickly firmed up into a concrete plan which leaves employers in no doubt that we will shut down campuses again. It is vitally important that we retain the momentum generated by nationally coordinated action. Branches drew enormous confidence from being part of national action: a feeling we don’t want to dissipate. The length of time out on strike also makes a crucial difference – the complete transformation of branches and members’ self-confidence after 14 days of nearly continuous action demonstrates that far from tailing off, members became more engaged and more active in many branches as time went by.

The decision to move to a further 14 days of strike action in the third term sends out a clear signal that UCU is not giving up the fight for decent pensions. Branches now need to identify key teaching, examination and exam board times to create the maximum impact. We know from the past that hitting exam boards ability to award degrees has a huge impact on universities.

How we relate to students will be crucial during the next phase of the action. We need to have a clear strategy for how to move on from the fantastic displays of practical solidarity shown by students (ranging from joining the picket lines, to bringing food, to occupations and protests directed at the University administration) to developing political unity at both local and national level around common demands in defence of public higher education, against fees and marketization, and for the democratisation of our institutions. Some of this can directly relate to the industrial action itself – for example now Cambridge has made a clear commitment around rescheduling, other institutions could take up this question in collaboration with student activists and SUs. Another area where we can work together directly with students is around the question of democracy, transparency and accountability within institutions over the role played by senior management in the pensions dispute. Then there is the question of national initiatives where we as UCU can show that we are standing with students over their demands – for example on tuition fees.

The energy and determination of staff on casualised contracts and graduate students in the strike show the potential for creating a different future for the academy to the one which our managers want to impose: a vision of atomised, insecure and poorly-paid staff delivering ‘education’ as a commodity to passive student consumers. Throughout our strike, inequality, discrimination and lack of democracy have been driving forces in mobilising students and staff to support it. We need to ensure demands to end discrimination in pensions are addressed, as are the gender pay gap and the discrimination BAME, disabled and other groups of staff face in universities. The focus of the Teach-Outs has been on reclaiming our universities from the marketisation and managerialism embedded within them. Members don’t just want their pensions back they want their public universities returned to them too.

Turning up the heat on the government

It is very welcome that Sally Hunt has called on members to sign a parliamentary petition demanding that the government acts as a guarantor for the USS scheme. This is a recognition at a national level in the union that we need to make the government act in order to solve a crisis which was ‘made in Westminster’. Campaigning around the petition to the Westminster parliament is important opportunity to force a discussion in parliament.

Within days of launching, the petition had gathered more than 10,000 signatures, triggering a mandatory response by ministers. The union should also take some bold initiatives here at a national level – a national protest to and lobby of parliament for example, and support local branches in lobbying their own MPs.

We need to link with other trade unions to ensure our pensions dispute develops wider struggles against neoliberal austerity and government. The media this week reported on a “black hole” in local government Defined Benefit pension schemes so it is clear that our dispute is just one battle in a wider war.

Nobody denies that the strike has transformed the union. This isn’t just reflected in the stunning recruitment figures, but in the whole practice of what we do as trade unionists. The democratic character of strike organisation in many branches – with regular mass meetings where local and national union officials could be held to account – was a crucial factor which empowered rank-and-file members to take the initiative and reject the ACAS deal. In many branches local strike committees which were far wider than the existing branch executive proved both effective in leading the action, and provided a space where activists could debate the deal quickly through WhatsApp groups and emails even before the mass meetings on the picket lines which decisively rejected the offer. We need to ensure that these forms of democratic organisation at a rank-and-file level develop further and build connections between them at a regional and national level.

Activists across the country should be building the UCU London Region organising dayschool on 28 April.

Let us know your experience of organising locally for the strike in the comments on this article.

Get involved in UCU Left

The history of the USS dispute has been one in which the role of the left in the union has been crucial. The opposition to the pension changes, the campaign for a ballot on industrial action and the calling of strike action all have their history in the campaigning of the UCU Left, a campaigning minority of left activists in the union. UCU Left is committed to building a democratic, accountable campaigning union which aims to mobilise and involve members in defending and improving our pay and conditions and defending progressive principles of education.

We fight for better funding and to defend academic freedom and civil liberties in the face of the neo-liberal agenda of the privatisation of education, which involves both undermining standards and prioritising the market. We stand for the principle of free universal education under democratic control of education workers, local communities and learners at all levels.

We oppose oppression of all kinds and will fight to ensure that equality work is central to the union.

The magnificent revolt which forced the union to withdraw from the ACAS deal shows that the power of the rank and file is a real factor in this dispute but we need to connect rank and file activists beyond their local branches and regions.

We want to expand our national network of activists so that UCU Left can become a platform for rank-and-file members across the country to organise action together to hold our leaders and negotiators to account. We want UCU Left to be a space for activists to share experiences of organising and building the fighting, democratic union we have seen emerge during the course of the last few weeks.

We need to build a mass rank and file organisation in UCU and would encourage everyone to now join UCU Left https://uculeft.org/join/

By Anne Alexander and Carlo Morelli

One Reply to “What’s the way forward in the pensions dispute?”