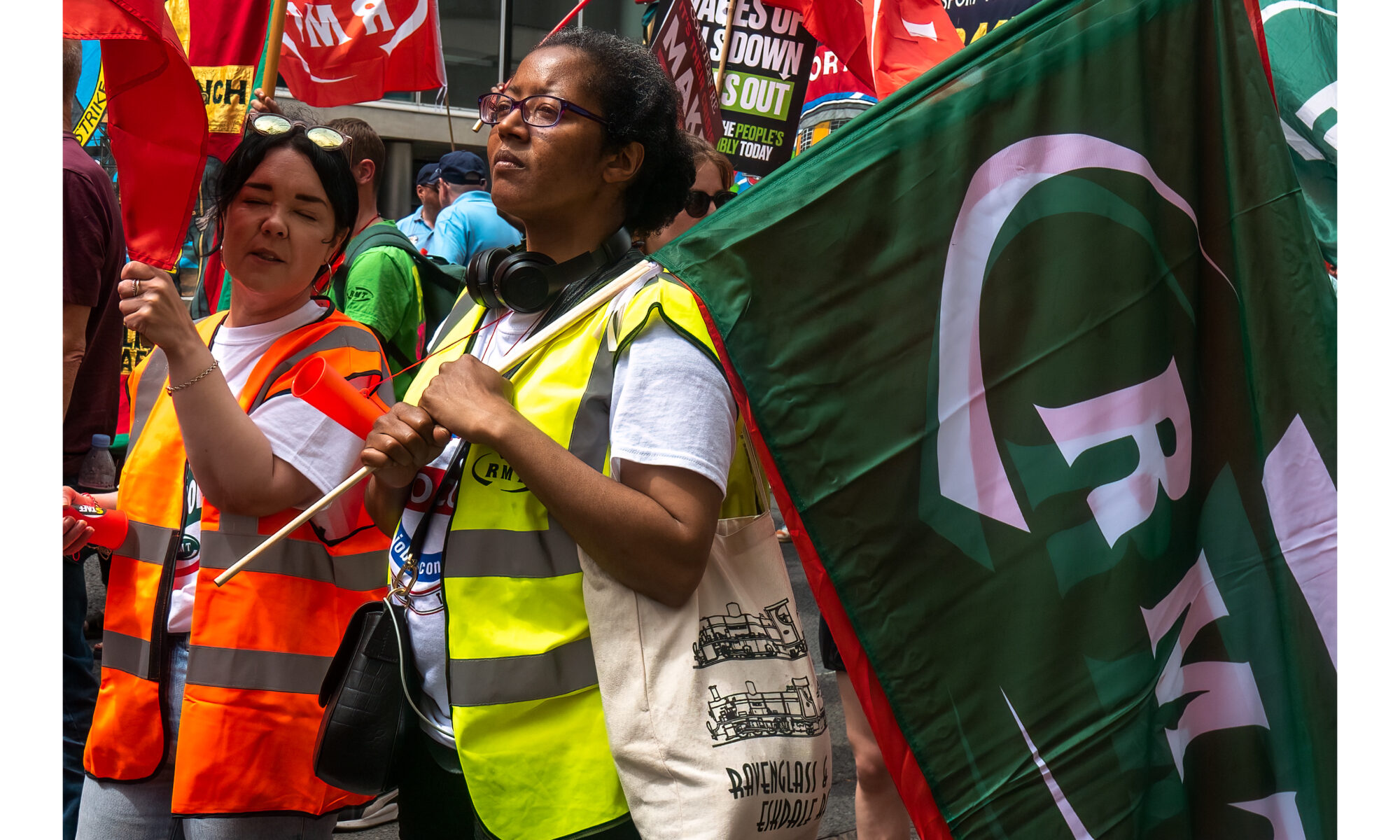 The RMT strike, the biggest for over 30 years, points to the direction of travel for the whole of the trade union movement. 40,000 rail workers struck across Britain and several thousand Tube workers did the same in London.

The TUC demonstration, which saw tens of thousands march through central London, was not only bigger than most people had expected, but reflected a real appetite to fight. It also looked different to past TUC marches. It was younger, more diverse and the dots were being joined together, connecting the cost-of-living crisis with the need to prevent war, austerity and climate change.

But the most significant reason that made this TUC march feel different, compared to many others, is that it had a focus – the RMT national strike.

Following the march, the NEU announced that they will be holding an indicative ballot of all their members. In FE UCU are balloting members in forty colleges across England after another insulting pay offer from the AoC.

There is now lots of talk in the media about how Britain is slipping back to the ‘bad old days’ of the 1970s. When I hear this point being made by journalists my initial response is, ‘bad old days – for whom?’. In 1970 ten million working days were lost due to strike action (in 2018 273,000 working days were lost due to labour disputes, the sixth-lowest annual total since records began in 1891). There were eleven million union members (today there are 6.5 million).

These two facts meant that the distribution of wealth was far more equal compared to today where the huge inequalities, between those with fabulous wealth and those relying on food banks, has grown to historical highs.

It was not just the earning power of workers that was significantly better but also the social wage too. With the rise of a militant trade unionism came more money spent on health and education.

So, when a lazy BBC journalist attempts to scare their viewers by warning of Britain slipping back to the ‘bad old days of 1970s’ my reaction is always, ‘I hope so’. This is not because I have a longing to get back into my high-wasters, flares, platforms, cheese cloth shirts and tank tops but because when our side fought back it dramatically altered the living conditions of all working people and put the fear of God into those who rule over us.

Listening to BBC Radio 4 the other day Nick Robinson was in Wakefield talking to ‘poor people’. He casually offered the opinion, after announcing a pay rise had been won locally by Bus drivers that matched inflation, that, ‘I hope this doesn’t catch on or we will have a real problem controlling inflation’.

We shouldn’t be too surprised that such a Tory lickspittle like Nick Robinson should make such an unqualified subjective point. Robinson spent much of his youth in the early-to-mid-1980s holding various offices for Conservative Party youth organisations (this was the time when Tory students were proudly wearing, ‘Hang Nelson Mandela’ badges around university campuses). But I was surprised to hear Dr Mary Boustead, the joint GS of the NEU concede, ‘It will have some impact’, in response to this same line of questioning on the Today programme, before moving on to defend her unions decision to ballot members over pay.

This is not a helpful starting point for a trade union leader to hold as they prepare to battle over pay with inflation at its highest level in over 30 years. We should not be conceding an inch to this so called ‘common sense’ argument. Instead, we should say loud and clear that wage rises do not cause inflation – adhering to profit margins does.

The old and false orthodox trope of mainstream economics which states that demands for higher wages leads to the rise in the cost of living is a familiar one.

The employers and government argue workers’ receiving higher wages for their labour inevitably means that the employer will have to put up the prices of commodities to pay for the wage increase.  This is only true if you accept the parameters of the argument that has been set by the employer. When striking for a pay rise workers are fighting for a fairer redistribution of wealth in society. As we have seen profit margins have increased throughout the pandemic and with it the gap between the wealthiest and the poorest has increased.

A strike over pay is an attempt to reverse this trend.

The employer’s attempt to blame those fighting for an increase in earnings for the rise in the cost of living is an ideological attack designed to protect their wealth and privilege. Our wage rises can come out of a redistribution of wealth.

Proud to be a Luddite

One of the ways the Tories hope to undermine public support for the rail workers is to dismiss them as Luddites. One of the issues the RMT are fighting over is the introduction of new technology, which the employers and the Tories say makes checking the rail network safer and more cost effective.

It is another ‘common sense’ argument that we are all meant to accept without challenging, that when workers try to take control of technological change, they hold back progress and are therefore ‘Luddites’.

But those denouncing workers attempts to stop employers making people redundant with new technology, fail to understand historically what the Luddites fought for.

The Luddites were a radical movement that arose at the beginning of industrialisation. From 1811 to around 1818 hand-loom weavers secretly organised to stop the closure of their smaller workshops and replace them with bigger and more mechanised machines and factories. A part of their campaign was to smash up the machines that were replacing them.

The Luddites were not against new technology. They were against the use of this technology to make them redundant.

So, of course Rail workers must resist attempts to replace them with a machine. A victory for the rail workers would mean that we are a step closer to worker’s having control over their working lives and technology. This is why we should be proud to be called a Luddite.

We all can play a role in ensuring that the strikes on the rail end in a victory for rail workers. Find out where your local picket line is, take your UCU branch banner, take a picture and tweet it.