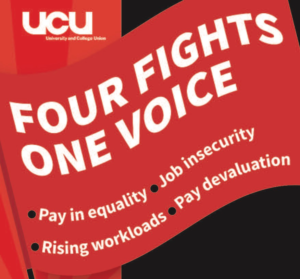 Vote to Reject the ‘offer’: Four Fights are more important than ever

Members are being asked to vote on the employers’ derisory ‘offer’ on pay and inequalities. It is important that we vote to reject their non-offer.

We live in the midst of a serious challenge to the continued institutional racial discrimination in society with the inspirational Black Lives Matter movement. As such, to abandon our fight for pay equality for BAME staff, women and other equality groups, would be a terrible indication that UCU is giving up on equality. This fact alone should be sufficient for voting to reject the ‘offer’ in the #Four Fights dispute.

However, the #FourFights dispute goes beyond pay inequality into many of the other areas that lie at the centre of what is wrong with industrial relations in Higher Education and the fact these are unresolved means we should not accept an end to our dispute.

Our dispute shone a light on the appalling levels of casualisation in the sector. It also highlighted the falling real pay levels for most staff of 15-20% over the past ten years whilst senior management sought to inflate their own pay beyond what anyone, apart from themselves, think is in any way acceptable. The fourth of the #FourFights was the increasing and unacceptable workloads facing members as rising student numbers failed to be matched by adequate staffing levels, leading to the worsening of higher education. Overarching all of these elements is the rampant discrimination in the sector.

The #FourFights dispute proved successful in ensuring all of these issues were finally accepted as areas for negotiation by employers. This is a marked step forward and was testimony to the 22 days of strike action we took. It has been argued that, if we do not accept the ‘offer’, what we have achieved in getting employers to discuss expectations will be withdrawn. However, this is not the case. The employers body UCEA has had to accept that the questions being raised in the #FourFights have to be addressed and meetings with negotiators are currently timetabled. Employers know they are vulnerable, but we need to keep the pressure on them.

The Covid-19 crisis is intensifying all of these failings in higher education. Indeed, with the move to blended learning, new issues relating to excessive workloads, working from home and the gender disparity this entails have arisen. Whereas UCU was demanding that all the fine words coming from UCEA needed to be backed with enforceable commitments to change,employers are using Covid-19 to drive these failings further into the sector. Marketisation is not being abandoned as a result of Covid-19 rather it is leading to its intensification with inequality, job cuts, pay cuts and bankruptcy across HE.

The Fund the Future campaign can become our political defence of the sector but it will be all the more powerful if we have a UK-wide strategy to address jobs, pay and inequalities to back it up.

Currently, UCU is leaving branches to resist these changes on a branch-by-branch level. But we know that won’t work. No matter what local deals emerge which minimise the cuts in a specific case, these will become the maximum any other branch can aspire to. We will quickly be in a race to the bottom with members paying the price for a lack of a UK-wide strategy of resistance.  We need a UK wide #FourFights dispute more than ever.

A successful rejection of the offer will not, of course, lead to an immediate return to industrial action. But it would be a clear marker to employers that UCU is serious about defending members and higher education. It would also boost the confidence to fight in those branches facing immediate cuts if the members know the union has their backs. Finally, it would also start to turn around the defeatism in much of the leadership of UCU that thinks all we can do is manage and ameliorate the decline of the sector. We need to reject this offer and begin the mobilisation of the union for the defence of higher education.