Ballot papers are out in the national industrial action ballot over pay. 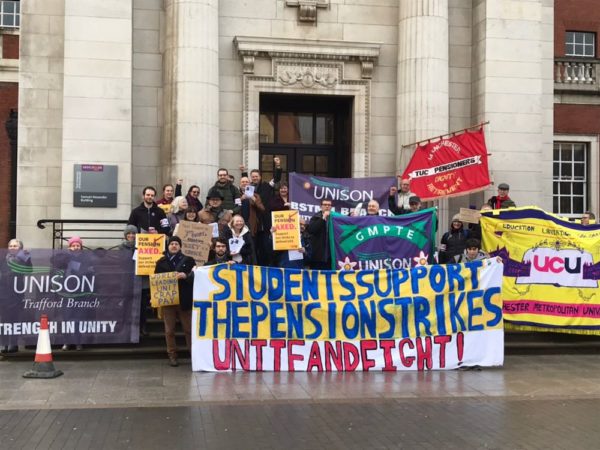 We now have a chance to end ten years of pay erosion in Higher Education. The offer of 1.8% made by the employers’ organisation, UCEA, doesn’t even match their preferred inflation measure of CPIH, let alone the more realistic RPI figure which currently stands at 3.1%.
No only that, but UCEA have refused to offer anything concrete on the equality aspects of the unions’ claim. It suits them to say that they have no mandate to force individual universities to address the sector’s shameful gender pay gap or its reliance on large numbers of insecure contracts.
In an attempt to send a tough message, UCEA is now instructing university managements to impose the meagre increase on their staff. They are hoping that, like last year, the anti-union laws will ensure that the unions can’t respond with industrial action.
However, the reality is that they’re not so sure that UCU will fail to meet the 50% ballot threshold. They have good reason to be worried. The USS strikes showed how powerful industrial action in universities can be, and last year’s pay ballots delivered overwhelming votes for action on the highest turnout ever on the issue. We weren’t able to mount a fight over pay but branches are learning how to beat the threshold with every attempt.
But the main difference from last year is that our pay campaign coincides with Round 2 of the defence of the USS pensions in the pre-92 universities. This makes this year’s fight a much more general one about the future of Higher Education and the status of the staff who work in it.
The intensified competition between institutions created by marketisation is what lies behind both the attacks on pensions and the attempts to drive down pay. A shared pension scheme makes no sense for managers of universities seeking to drive each other out of business. That’s why we are likely to see further attempts by post-92 institutions to exempt themselves from the Teachers Pension Scheme.
And university managements are determined to continue reducing the proportion of their income they spend on pay in order to divert funds to building projects as well a inflating their own salaries.
That makes this autumn’s fights over pay and pensions a crucial one for the sector as a whole. Fighting for decent pay and pensions, for equality and against casualisation represents a challenge to the neoliberal logic that increasingly grips our sector.
With a Tory government in crisis this is a good time to fight. We need to redouble our efforts to get the vote out and prove that our bosses can’t rely on the law to help them quash resistance.