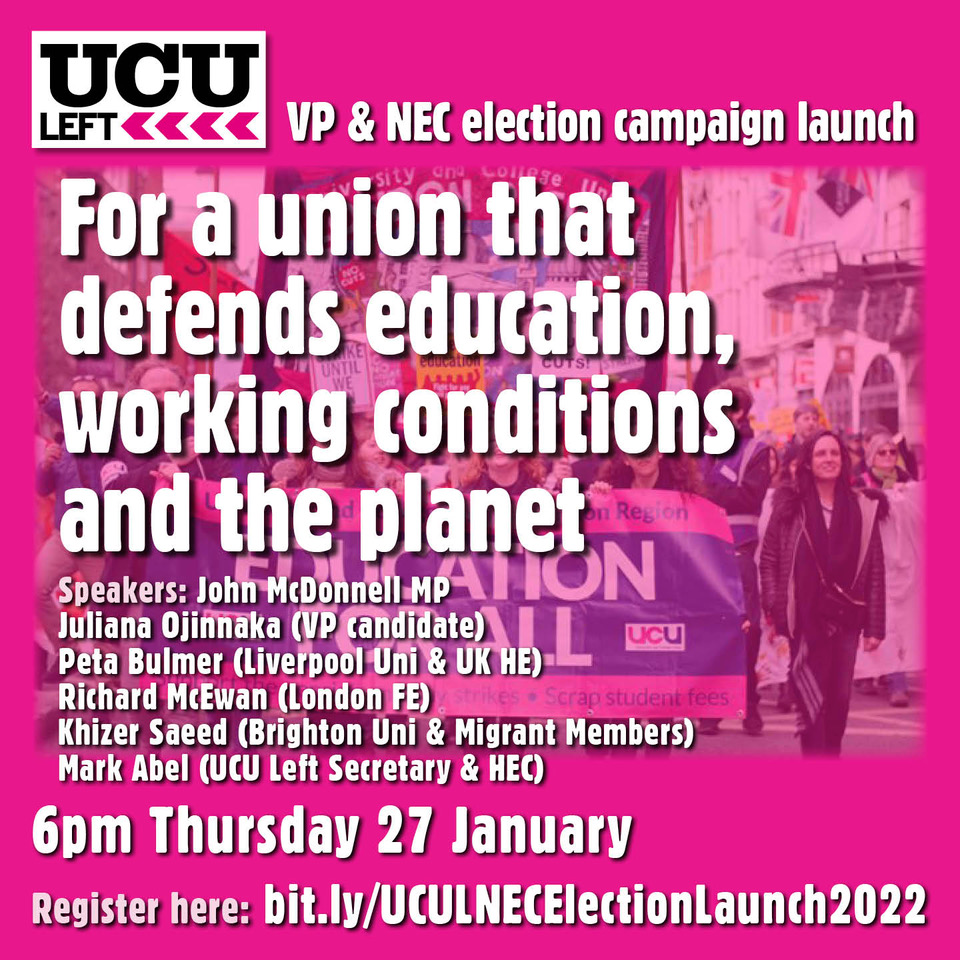 Come to UCU Left’s election launch and hear from John McDonnell and some of our candidates on why you should vote for UCU Left candidates and what you can do to help the campaign.

Confusion surrounds the future of UCU’s two disputes in Higher Education. The General Secretary’s email to members on Friday evening spoke in upbeat fashion about twelve more branches joining the fray after reballots and ‘strike action from February in the USS and Four Fights disputes’.
Joint action in both disputes was certainly the expectation and wish of most delegates at the Branch Delegate Meetings (BDM) which took place last Tuesday. As this analysis of the record of the discussions shows, branch delegates overwhelmingly expressed their willingness to step up action in both disputes by moving to escalating and hard-hitting action. Delegates also expressed a preference for the motion from Four Fights negotiator Marian Mayer and USS negotiator Marion Hersh, both UCU Left members, over two motions calling for a strategy of localising our action by targeting individual institutions.
So the General Secretary’s announcement preparing us for ‘co-ordinated national action bringing together the two disputes’ is very welcome. Unfortunately, the Higher Education Committee (HEC) did not commit the union to such action.

What strategy did HEC adopt?

The recommendations which HEC passed set out a different strategy for each of the two disputes. This means the disputes are effectively decoupled. For the USS dispute, the strategy contains a start-date for strike action, but no pattern or number of days. The focus of the action is the USS talks in February, but given the requirement for 14 days notice, it is already too late for action to start on 7th February, which was the stated reason for holding the BDMs and HEC last week.
On the Four Fights, the plan is for a different form of strike action: a coordinated programme of rolling disruptive strike action which includes combinations of national and regional strike action. Not a single delegate at the BDMs raised the possibility of regional action. At no time were branches asked to consider it. The General Secretary describes this as ‘the most innovative, wide-ranging and sustained action UCU has ever called’. In reality, regional strikes undermine the unity that has sustained our battles up till now, and dilute our action. It means that each institution will be disrupted less often, making it easier for the employers as a whole to hold the line against us.
Because no dates were set, HEC has ceded decisions about the timetable and shape of action to the General Secretary and the HEC officers. This might not be a problem were it not for the fact that Jo Grady believes it is important to fight first over USS, and to deal with pay, inequality, casualisation and workloads in the longer term.
This is a mistaken strategy which threatens to fritter away the hard work by activists to achieve ballot mandates in the face of the anti-union laws and to waste the action that we have already taken. It is strategy that breaks the unity between pre- and post-92 branches, between branches in different regions, between casualised and more established members, and between staff and students.
Unless we find a way of ensuring that the General Secretary’s promise of joint sustained action in the two disputes becomes a reality, we risk not only allowing the employers to wreck our pensions and impose the biggest single real-terms pay cut we have experienced. We send a signal to members that casualisation, pay inequality and workloads are not the union’s priority. The result would be demoralisation among members from which the union would struggle to recover.
One way of making it clear that we want early action in both disputes is for branches with a mandate for the Four Fights to demand that they are allowed to take strike action on the dates nominated for strikes over USS. Branches which have won a disaggregated ballot to fight over pay, inequality, casualisation and workload should be allowed to take joint action in pursuit of those issues. Branches with just a USS mandate but a strong Four Fights vote should also consider passing a motion to join in on USS alongside Four Fights action. We are stronger together.

What can we do?