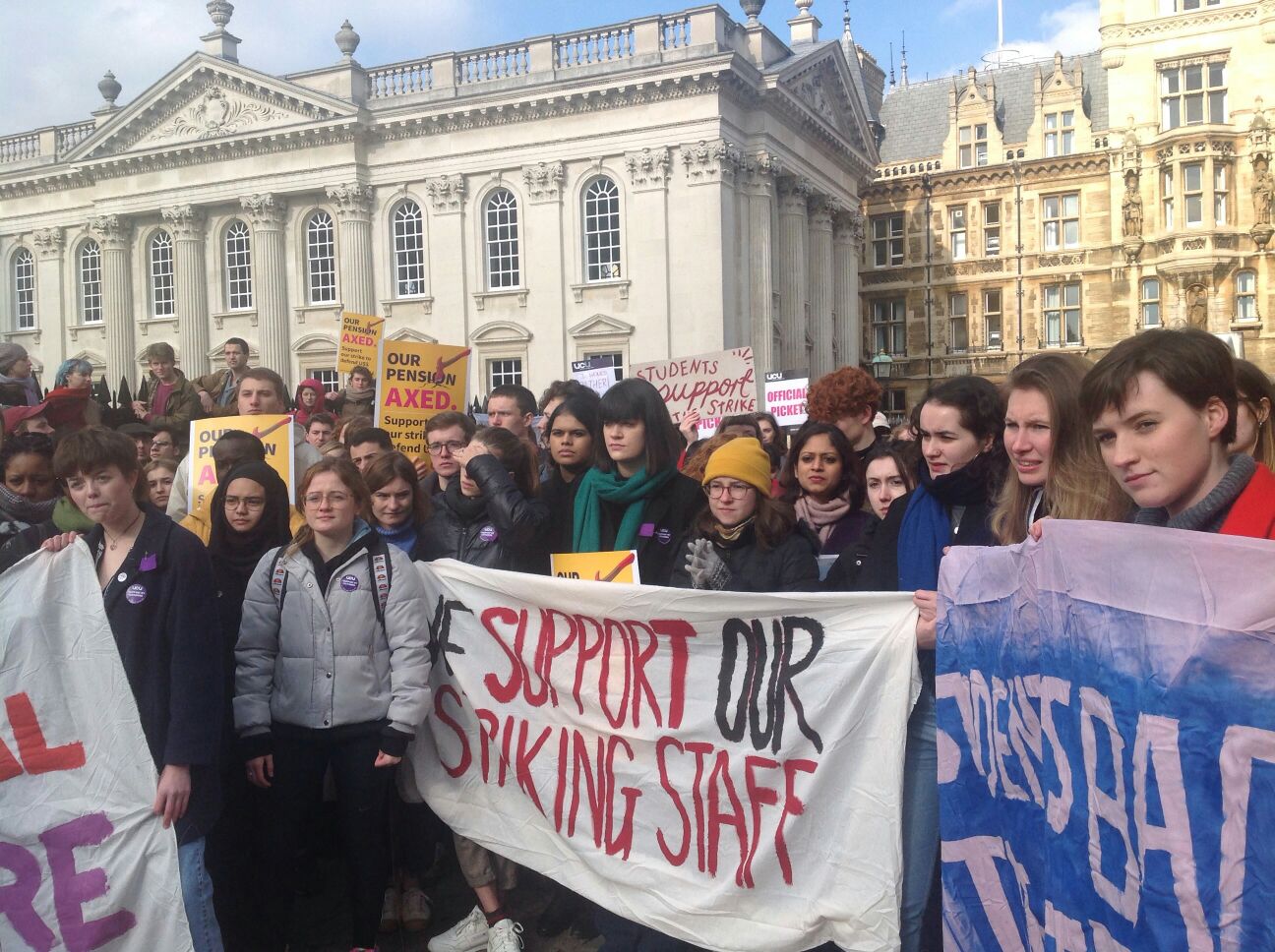 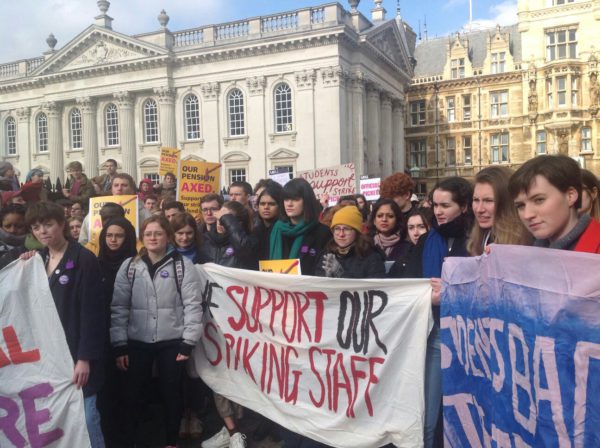 News that Cambridge Vice Chancellor Steven Toope called on UUK to return to negotiations was greeted with cheers by hundreds of strikers outside the University administration buildings in Senate House. But it was immediately followed up by a pledge to turn out again on Monday in the same numbers. We know we have got senior management rattled, because our strike is strong and we have forged a powerful bond of solidarity with students.

We have had at least 200 out picketing the last two days covering eight locations. Our branch has grown to 1200 members with hundreds joining since the ballot result was announced. The strike has been highly effective: the normally busy Sidgwick site was practically deserted today, except for the dozens of pickets at the main entrances.

And this is in an institution where UCU does not even have official recognition!

Students are building an impressive solidarity movement which is not only backing our call for a decent defined benefit pension scheme but raising its own demands – against the marketisation of higher education and its colonisation by corporate interests,  for a university free of racism and Islamophobia.

The 600 or so students who marched in support of our strike yesterday were carrying banners saying “Cambridge betrayal – Staff are not for sale”. They don’t buy the line that paying into a pension scheme which protects staff from poverty and insecurity in retirement is somehow bad for their education because it might have an “adverse effect on the University’s competitiveness” (our management put it in their response to September’s consultation over the future of USS).

The disgraceful role played by some of Cambridge’s constituent colleges in apparently inflating the size of the hawkish minority determined to break the defined benefit scheme is also stoking anger well beyond the union’s ranks. Fellows in colleges where the bursar backed this destructive position without even consulting their colleagues are incensed, and students are mobilising to call emergency meetings over the pensions crisis.

Cambridge is of course part of a much bigger picture where the last two days have seen mass pickets and major solidarity mobilisations at universities up and down the country.

Yet none of this ferment of activity would have happened without the strike. It is the strike which builds the confidence of our supporters and deepens cracks in the unity of our opponents.

What’s true of Cambridge is also true at a national level. Any symbolic gains we are making in terms of forcing the employers to negotiate is simply because we have shown our strength on the picket lines. And we should be careful not to get sucked down the route of thinking the strike is just a tool to get “everyone talking again.” We talked before. They ripped up agreements governing our pensions in front of us. UUK hasn’t budged from its position that caused the strike. So we shouldn’t budge from ours.

We aren’t on strike just to re-open negotiations. We are on strike to win. That means staying out until UUK agrees to a decent defined benefit scheme and using the momentum of this strike to build union organisation capable of rolling casualisation, challenging the racism, Islamophobia and sexism which blight the lives of our members and students, and turning the tide on the marketisation of education.