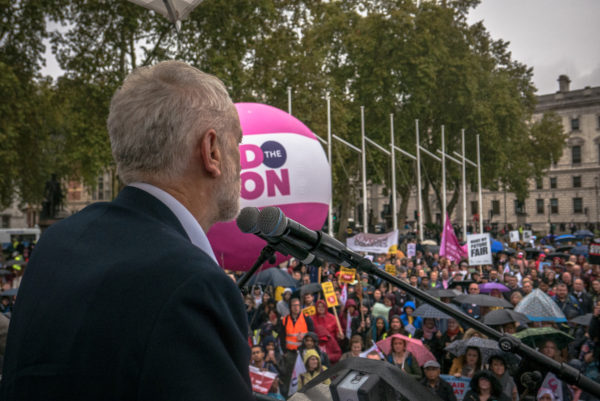 Boris Johnson’s victory at the general election has sent a shiver of fear down the spine of all those who dared dream that this election would bring about a government led by Jeremy Corbyn. A government that was caring and progressive. It has left many fearful for what the future might bring for themselves and their families.

I’d like to thank Jeremy Corbyn for giving us hope and for campaigning for an exciting alternative to the market driven austerity policies of the Tories and Liberal Democrats – the yellow Tories. Jeremy has been vilified throughout this campaign, indeed, ever since he was elected as leader of the Labour party. The vast majority of the mainstream press and the BBC have done all they can to smear him as a terrorist sympathiser, a Stalinist and an anti-Semite.

It is quite clear that Jewish people will not be more secure and be less threatened under a Johnson government. The man is a racist to his core. He is part of the same political tradition which introduced the first ever immigration act in 1905 – The Aliens act. An act brought in specifically to prevent Jewish people entering this country who were fleeing persecution from Eastern Europe. Johnson, continuing with this tradition, will introduce a points-based system to prevent migrants coming to this county.

So why did Labour lose and why did Johnson win with such a majority?

The Tories succeeded because Labour failed to cut across the central Tory message, ‘Get Brexit done’. As many of us argued you cannot ride roughshod over people’s democratic will. 17.4 million people voted to leave the European union. Some because they mistakenly believe that there are too many immigrants in Britain. Many more did so because of a visceral distrust of the political elite and the impact of austerity. We warned if Labour was turned into a Remain party with calls for a second referendum it would be severely punished in the election.

Why did working people vote for Johnson?

It is quite clear that the Tories understood the deep bitterness and the sense of betrayal that significant sections of the working class felt towards the Labour Party because of the position they took on a second referendum.

To woo them the Tories had to steal some of Labour’s programme; funding for the NHS, schools and social services. Johnson in his speech to the Tory faithful on Friday morning spoke directly to those within the working class who had voted for him. As ever the arch opportunist he said that he understood that, ‘your hands must have quivered over the ballot paper when putting your cross next to our candidate’. He understood that they lent the Tories their vote to get Brexit done and said that he would not betray that trust. Of course, he will.

However, this fracture between sections of the working class from some parts of the North and the Midlands and the Labour Party has been a long time in the making. Working people’s lives have been destroyed by successive Tory and Labour governments. Many councils run by the Labour Party have carried out cut after cut rather than organise resistance to the Tory offensive against the welfare state.  The levels of poverty are among the highest in the country. In many of the high streets in these communities even the charity shops are closed.

It was not only the Labour Party that suffered in this election. All those MPs who left the Labour Party and tried to set up a new party based on the centre ground and who campaigned for revoking article 50 were humiliated. Chukka Umunna, Luciana Berger and, in the Portillo moment of the night, Jo Swinson – all lost their seats.

We live in the ‘age of extremes’. The politics of the centre ground are no more. People want a break from the politics of the past 40 years that have failed so miserably and done so much damage to working people lives. We shouldn’t fear this we must embrace it.

Does Johnson’s success prove that a socialist manifesto is not popular?

A lot has been said and there will be a lot more about how Corbyn’s Socialist manifesto was the key problem. People in Britain have rejected Corbyn and his radical Socialism. From the awful Lord Johnson, leading the Blairite attack on Corbyn, to many Labour MPs, all will be lining up to attempt to finish off the Corbyn project.

Of course, this is not at all surprising. The vast majority of Labour MPs despise Corbyn and McDonnell’s leadership. They have done all they can to undermine them. They put out leaflets in their constituencies in the election campaign distancing themselves from Corbyn, leaked their views to ‘Tory friends’ about how terrible Corbyn is and peddled the Tory myths about Corbyn being an anti-Semite and a terrorist sympathiser. These MPs do not feel devastated like the rest us do at this moment of time. They are pleased that Corbyn did not win. They hated every part of the manifesto, wedded as they are to the belief that capitalism works, it just needs a bit of tweaking here and there.

Their betrayal must not be forgotten or forgiven.

There was a problem in the way that Labour’s campaign was conducted. Whilst the manifesto was more radical than 2017 the campaign wasn’t. Policy announcement after policy announcement offering more ‘free stuff’ did not convince people. Opinion polls show that nationalising rail, water and the gas industries are very popular policies. But without a higher level of struggle and a campaign that looked and felt different, to those that have been conducted in the past, then the confidence in the ability of a Labour Government being able to carry out these policies didn’t seem credible.

It is much easier for the likes of Johnson and Farage to put themselves forward as anti-establishment figures because all they have to do is stick two fingers up to the elite. Many of their actual polices are ones that cut with the grain of the prevailing orthodoxies of the time. Whereas a radical socialist manifesto that speaks of transferring the wealth and power from the rich to the poor, cuts against the grain of the ideas that dominate our society. The more passive people are the more likely they will feel that these policies are just not plausible.

Photo opportunities of Corbyn with children at a primary school or heading a football did not allow for Labour’s campaign to take off and inspire in the way it did in 2017. The mass rallies in 2017, gave a sense of excitement, a freshness and therefore credibility that these polices could be implemented. This kind of campaign raised the level of confidence because it was not about an individual but a movement.

There were opportunities to do this in 2019. Jeremy and other Labour MPs did turn up to UCU picket lines to show their solidarity. But the team around them did not try and make them a central part of the election campaign.

In London where Jeremy did turn up to support our picket lines, thousands would have turned out to greet him if we had known he was coming. In the week they were attacking Labour for saying they would fund the WASPI women we could have had JC leading thousands of women strikers fighting over pay, pensions, zero hours contracts and the gender pay gap. This would have helped to signify that Corbyn is the anti-establishment candidate and he has a movement that can deliver on these promises.

The media, press, political commentators, Labour and Tory MPs will be lining up to punish those who dared to dream and hope of a world where poverty, homelessness and inequality would be confined to the history books. Where urgent action is taken to tackle the climate crisis. The establishment were terrified that Corbyn could win. The more far sighted members of the establishment understood Corbyn has not come from out of space. He is a reflection of the real concerns and desires of millions of people in Britain today. Over 10 million voted for a radical Socialist programme. This time we did not succeed. The establishment breathed a sigh of relief. They got away with it. But for how long remains to be seen.

Real change has always come from below by ordinary working men and women organising to make their lives better. Parliament merely passes laws that reflect those struggles. Our UCU members in HE once again are leading the way in demonstrating that we can fight and win. They will be the first group of workers that will be taking national strike action in the Johnson era. Let’s make sure that we get behind them and encourage more to follow suit.

Once again thankyou Jeremy and John for offering us hope. There is no turning back. We have only just begun. See you on the picket lines.