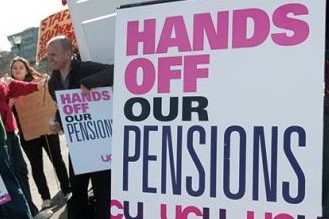 USS Valuation Statement
Do you want to increase what you pay to 13.6 – 18.6% for a pension that is already in surplus? If not, prepare for action

USS has finally released its valuation proposals, giving a total cost of 42.1 – 56.2%. This means member contributions of 13.6 – 18.6%. Accompanying this are increasing employer contributions that will no doubt be used as an excuse by employers to justify a trajectory of redundancies, pay cuts and increased casualisation and inequality

Why should members pay more when the Scheme is in rude health? Despite Covid and Brexit, USS continues to do very well and now has assets of over £80 billion increased from £66.5 billion at the last valuation in 2018.

Despite repeated requests from national negotiators and employers, the Trustee has not come up with any evidence of the crisis its pessimism. It says it is being prudent, yet the reckless prudence it is undertaking is actually destroying the Scheme.

The Trustee has also miserably and repeatedly failed to engage with the hard evidence that USS can continue to pay pensions from income without touching assets far beyond the foreseeable future (i.e. 25+ years). Its attitude is like the belief in a flat earth in the middle ages.  “If we go too far, we will fall off the edge” is what the flat-earthers thought.  Yet in reality there was no edge.  Similarly USS is proposing layer upon layer of supposedly prudent actions that are in effect destroying our Scheme.

USS’ increased contributions will have massive equality implications as the greatest impact will be on casualised and other lower paid members, younger members, women, Disabled and Black members who earn less and have less pension built up. These decisions by City fat cats have very real and disastrous consequences for members.  If this increase goes through, it is unlikely that the Defined Benefit (DB) scheme will continue. Spiralling costs could wreck the scheme and it will become unaffordable for most. Employers are trying to deal with this by proposing a different pension offering for those in shorter-term contracts thus trying to drive a further wedge between the permanently employed and the casualised.

Hopefully HEC will pass the recommendation for a special sector conference on USS and it will need to take place soon. We need to strengthen our strategy to defend USS.  Otherwise we will lose it and end up with a scheme with only a fraction of its value or which is unaffordable for many members.

Loss of a healthy Scheme like USS as a DB scheme will also put all the remaining DB schemes at risk and have a massive negative impact on other defined benefit pension schemes.

Our action should be on many different levels.  This includes not just sustained industrial action but also support from students, a media strategy and developing the parliamentary strategy agreed at HE sector conference in December 2020.  We will also need serious legal action against USS and the Pensions Regulator.  We won in 2018 and we can win again if we develop mass action by members.