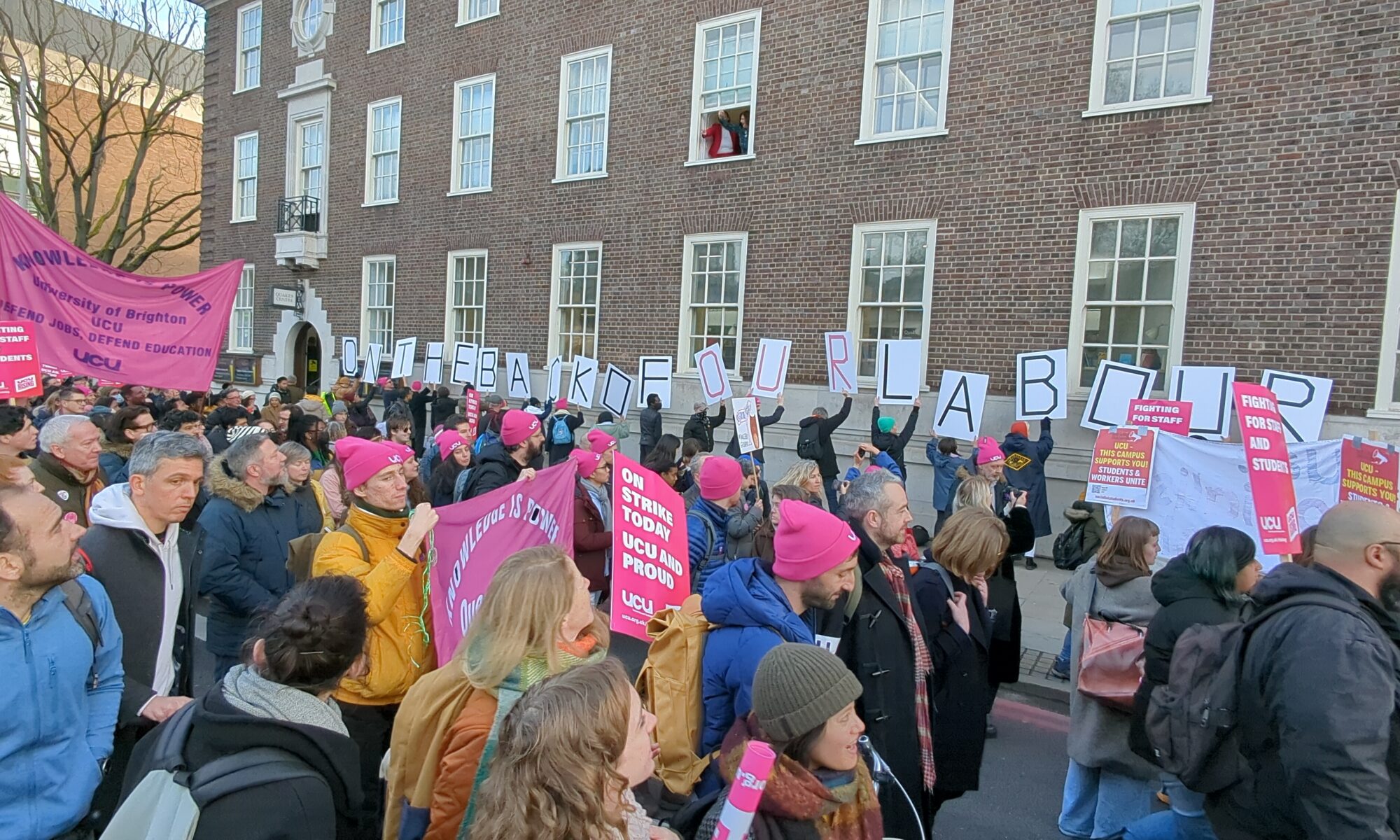 What lies behind the continual delays in announcing industrial action and the current tussle between Jo Grady and the Higher Education Committee over strategy in the UCURising disputes? This article explains where the conflict comes from and why fighting for control by members is so important.

The long-running concerns about democracy in our union have come to a head with another attempt by the General Secretary to impose her own strategy for the UCURising disputes. Jo Grady has circulated her proposal to all members and hopes to use January’s Branch Delegate Meeting to induce the Higher Education Committee (HEC) to overturn the decisions it took in November.

The issue of democracy has been high on the agenda for several years. The #NoCapitulaton moment in 2018, followed by the leadership’s shutdown of Congress that year, pointed to a ‘democratic deficit’ in the union that Jo Grady highlighted during her campaign for General Secretary. Congress delegates set up a Democracy Commission which they hoped would devise policies to enhance the voices of members and improve the transparency of decision-making.

It didn’t work. Very few of the Democracy Commission’s proposals were implemented, and the worries about an unaccountable leadership have, if anything, grown during the Four Fights and USS disputes. Two motions directly critical of the General Secretary made it onto the agenda of Congress 2022, along with others calling for more consultation with members during disputes.

It is not surprising that democracy issues are exposed during industrial disputes. When the union takes on the national employers, tensions are exacerbated between those employed at head office to lead the union and the members taking action on the ground. The more bitter and protracted the dispute, the more ordinary members feel that they deserve greater control over the strategy being deployed. After all, they are the ones making considerable sacrifices in taking strike action or facing the threat of 100% pay docking for ASOS.

Delegates elected from branches have become less and less willing to accept the General Secretary’s strategy proposals. In April 2022, Jo Grady’s argument that the union was too weak to take on the national HE employers and that a period of recruitment and rebuilding was necessary before we could fight again was rejected repeatedly by conferences in favour of strong action early this academic year. Members also insisted that there should be more Branch Delegate Meetings (BDMs) before important decisions on industrial strategy are taken.

There has also been growing tension between the elected lay leadership of the union which is formally in charge of industrial disputes – the Higher Education Committee – and the full-time leadership – the GS and officials. When the HEC becomes dominated by representatives of members who want to see a serious fight against the employers, it increasingly finds itself in conflict with the General Secretary.

The full-time leadership has attempted to control debate by ruling motions brought by HEC members out of order. When these attempts failed, and HEC passed the motions, they have been declared ‘unimplementable’. This happens particularly when motions relate directly to issues of democracy. HEC tried to gain control of the questions put to branches ahead of BDMs and to allow motions from branches to be considered, but their decisions were pointedly ignored.

The very mechanism that members put in place to enhance democracy has been routinely subverted by the way that BDMs are run. The choice at January’s BDM will be either the HEC’s strategy of a marking boycott followed by indefinite action, or the five days of strike in February followed by five more in April favoured by the General Secretary. Not only can no alternatives be considered, but the debate is rigged. The GS has the resources to circulate a glossy document arguing for her plan, while the HEC was made to keep its decisions secret for weeks and has no direct access to members to communicate or explain them.

What can we do about this?

The conflict over democracy in the union is not one that can be wished away. Nor can it be permanently solved. It is a reflection of the divergent interests of the bureaucracy of trade unions on the one hand and the rank and file membership on the other. The membership can’t do without a full-time leadership to manage the day-to-day running of the union, its resources and finances. But a union is nothing without its members, and the bureaucracy has to accept a degree of accountability to them. There is a continuous battle over the degree of control that members should have over decisions taken by those who run the union.

This internal battle within the union is not an academic exercise. When the union is in the fight of its life against a major assault on the pensions, pay and conditions of its members, democracy is not a luxury. When the level of action required to beat the employers has become serious and protracted, the struggle cannot be won unless the members taking that action feel that they are in control.

This is not only because members in the workplace have a better grasp of strategy than the officials based in head office, despite their claims to be ‘professionals’. It is also because treating members like an army to be mobilised at the whim of a General Secretary will rapidly erode their motivation and commitment to the fight.

The fight for democratic control

It is essential, therefore, that we fight to extend democracy in UCU. We must continue to find ways to challenge the manipulation of BDMs and the use of member surveys to try to justify strategies dreamed up at head office. We need genuine debate, not a series of branch reports which can be ignored if they do not match the views of the bureaucracy. Branches should pass motions on industrial action and demand that they are discussed at the BDM. We must also continue to demand that the decisions taken by elected representatives on HEC are implemented.

We must create strike committees in every institution which meet daily at the height of the action to allow members to control their own strikes and ASOS. We must press for these local bodies to be linked through delegates to a national strike or dispute committee, whose decisions are binding on those charged with carrying them out.

UCU Left stands for a democratic, fighting union. Our opponents try to claim that UCU Left members on HEC and on branch committees seek to impose their own views on reluctant members. This is the opposite of the truth. We are in favour of widening the involvement of members in debates about the running of their union and abiding by the decisions that they take. We are opposed to decisions being taken at head office and imposed on members.

The fight against our employers and the fight for democracy in our union go hand in hand. Democracy is the only way to win.

Fighting the HE disputes
What strategy do we need and how should we decide it?

The General Secretary has proposed an alternative to the strategy passed by the Higher Education Committee on November 3rd. Instead of a January marking and assessment boycott followed by an indefinite strike, she advocates ten days of strike action spread through February and March.

Ahead of the Branch Delegate Meeting, join this Q&A to find out why UCU Left members of HEC voted for a MAB and indefinite action, and why we need union democracy to win these disputes.