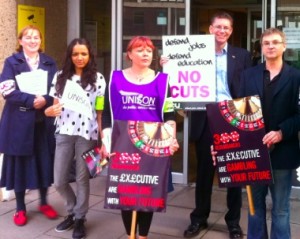 Hundreds of UCU members from around the UK have already pledged personal support for Mark’s campaign for General Secretary you can add your name to the growing list here, and the full list, which is growing every day is included at the bottom of the page.

Here’s what a few of them have to say:

‘‘ I am delighted to nominate Mark Campbell as UCU General Secretary. Mark has worked tirelessly to represent UCU members at London Met through countless attacks from a completely dysfunctional management. UCU is facing horrendous challenges but Mark has shown real commitment to building a democratic, campaigning union that has a clear vision of what education should be.”

‘‘ We are in unprecedented times with a government determined to turn the clock back to Dickensian days. We need union leaders who not only say the right things but can follow them through. I’m backing Mark because he has the determination to fight and he understands the struggle from the grass roots.”

‘‘ During our recent successful campaign against compulsory redundancies at Barnsley College the support of UCU activists including Mark proved vital in encouraging members to commit themselves to taking substantial strike action. It was only by being prepared to take such action that we were able to win when negotiations had failed. Mark clearly stands for the strategy of fighting to resist attacks on jobs and conditions. A vote for Mark is a vote for a fighting union.”

‘‘ I support Mark because he talks like the people I fed up with being treated as if they’re not trusted to do their jobs. Mark doesn’t give the impression that the best we can do is hold the line, and even then only if we’re lucky. He makes a coherent argument, not just for resisting the encroachment of management into teaching and researching, but also for fighting to build the branches and use our organisation to improve conditions at work for staff and quality in the classroom for students.”

Mark is a dedicated, energetic and creative, ranch officer. As a lecturer he is well respected by colleagues and students alike. His political ideals, which I respect, are held strongly but presented lightly. In branch officer meetings he is pragmatic but principled which gives him a consistency and certainty that leads.”

“Mark recognized the importance of our strike in 2009 with his continuous support and regular presence on our picket lines. His encouragement to build the resistance to defend jobs helped to keep our strike strong.”

“At a time when HE faces unprecedented estruction, we in UCU need energetic new
leadership from among the ranks of education staff themselves: Mark Campbell is a committed trustworthy and experienced colleague and campaigner who can provide us this.”

We the undersigned endorse Mark Campbell’s candidature in the forthcoming UCU General Secretary election campaign. Mark is a UCU branch officer at London Met and a member of the NEC. Mark has a well established track record in the union as a campaigner against cuts, redundancies, privatisation and in defence of education. Mark is standing in the election to give a voice to rank and file members across Further, Adult and Higher Education