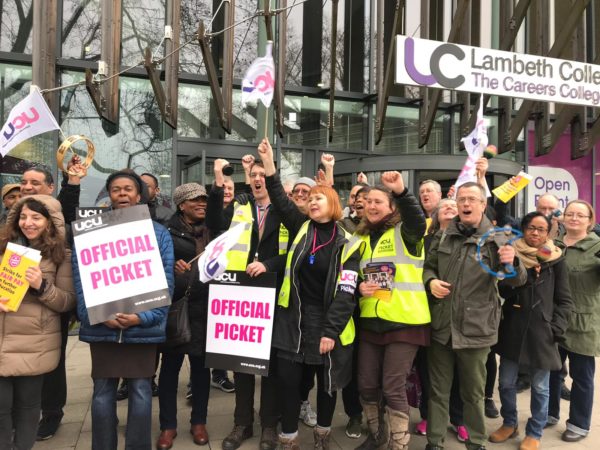 Two years ago UCU’s Further Education Committee launched a pay campaign which broke from the industrial action campaigns of the past. We launched a series of nationally coordinated local strikes.  The changed approach is not what many of us preferred. We wanted national strikes that involved all branches and still do.

However, the introduction of new ballot thresholds brought in by the Tory trade union laws, designed to make national strikes unachievable, appeared to have its desired effect. Whilst there was a marked improvement in turnout, the highest that was achieved in a national ballot was 31%, significantly off the 50% threshold.

Some have argued within UCU that pay is not the key concern amongst members and that workload and jobs are more of a priority. This is mistaken. Whilst only achieving a 31% turnout in an aggregated ballot, 85% voted for strike action over pay.

Counterposing pay and conditions is dangerous. The underlying logic is to say that we give up on pay and instead focus on workload and jobs. Despite UCU policies stating differently, the reality has been that this is the strategy that has been followed. Those of us in UCU Left argued that if you give the employers your wages, they will increase workloads and take jobs. In the past five years in FE 24,000 teaching posts have gone and wages have been cut by 25%. Those remaining in the sector are facing workloads that have skyrocketed as student numbers stay the same but teaching posts diminish.

The first round occurred mainly in London involving 13 colleges. The turnouts and votes for action were excellent. 65% turnouts with 94% vote for action was the norm in most colleges. The first college that made a breakthrough was Sandwell. They won a 6% pay offer over three years. This broke the 1% pay recommendation by the AoC.

The next significant breakthrough was at Capital City College Group (CCCG) the third biggest group in the country, which includes City and Islington College, Westminster Kingsway College and the College of North East London. They won a 5% pay offer for 2018/19.

This was then followed by Bootle College who won a deal worth between 4% and 6% over two years.

Many branches put in part two claims. This is a local element over issues like casualisation, workload and holidays. In the case of CCCG their part two claim was over casualisation. They achieved a new policy that all staff that had been working for the group for three years or more and working ten hours per week or more were to be automatically placed on a permanent contract. This meant at CCCG fifty members of staff were made permanent worth, on average, £6k a year.

These local campaigns were coordinated where possible. The first wave of strikes had 13 colleges involved, but as employers moved to resolve the disputes it became increasingly difficult to coordinate all the branches. However, branches were in control of their own campaign and could tailor their action to suit their specific needs. CCCG took eight days of action and targeted exam dates to apply maximum pressure.

The second round that we are now in includes some colleges that were on strike last year and others who have joined more recently. Many of these colleges have not taken action for many years. Colleges like Swindon, Warwick, Petroc in Devon, West Thames and Harlow are now achieving very high turnouts and votes for action and recruiting significant numbers to the union.

We have been successful when branches have gone on the offensive. Branches that campaigned on ‘The money is there, we want our share’, positioning themselves as the guardians of inclusive educational values and taking sustained strike action have proved that we can change things for the better.

The latest college to adopt this approach successfully was Lambeth, which is now merged with South Bank University. After UCU members struck for ten days, and months of campaigning by the college unions, management agreed to a 3% pay offer, a one-off payment of £250 to all staff who earn below £26,000, all support staff to earn at least the London Living wage, a week’s extra holiday, double sick pay entitlements and a one hour reduction in teaching time per week. This is a college that has not given a pay rise for ten years and is a college that for years has declared themselves bankrupt and in severe financial deficit.

It is clear that where branches have organised a tight GTVO plan and are well supported by regional and national UCU then all branches can get action off the ground.

The final significant point about the outcomes and method adopted within these disputes is how the issue of equality was woven into the disputes. In particular where branches campaigned over pay and casualisation they highlighted the disproportionate effects of low pay and casualisation on women and BAME lecturers. For example, at CCCG 70% of those on HPL contracts were women.

The impact on women and BAME staff at those colleges that succeeding winning over pay and casualisation has meant that they are disproportionately the ones that have gained from these victories. An important step in reversing inequality in our institutions.

The defence of Further and Adult education is urgent. A decade of austerity has taken its toll on the sector. National leaders are constantly warning of the dire consequences of damage to FE.  With over one million adult education places gone in the past five years and with the disastrous policy of compulsion, FE is fighting for its life. It is with this understanding that branches have entered fights for better pay and conditions. They understand that, ‘the conditions that lecturers teach in are the same conditions that students learn in.’

One of the consequences of fighting locally for increased pay and conditions has been to focus the minds of the employers. As employers attempt to get out of the line of fire they are putting pressure on the AoC and government to increase funding for FE. This has resulted in a more dynamic funding campaign by the AoC.  The recent debate brought about by a 70,000 strong petition in Parliament on FE funding had over 50 MPs taking part. Lots of warm words about FE.

But it’s deeds not words that count.

To win more funding for the sector we need more branches to enter the nationally coordinated campaigns for pay and conditions. But to secure these victories for the long term we need more government funding for FE and an end to incorporation.