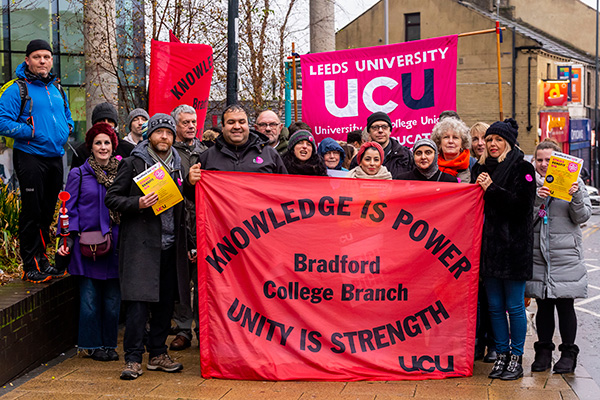 After University and College Union (UCU) members took eight days of strike action in pursuit of a 6 per cent pay claim, governors from the Capital City College Group (CCCG) took a decisive step to secure fair pay for all staff by offering a 5 per cent pay award to staff.

The chief executive has agreed to waive his bonus payments and has announced that he will take a pay cut of 5 per cent as a step towards creating “an atmosphere of mutual trust and respect across the organisation”.

The new chief executive at CCCG has brought in an exciting approach to the group and has listened positively to the arguments from union representatives calling for a change in direction.

While recognising the desperate need for more government funding, his approach is not one that starts with the usual threat that higher pay will cost jobs.

In fact, his starting point is that without having decent pay, and a more equal pay structure, then we will not be able to achieve the excellence that we all strive for in education.

His argument – and one that UCU has been campaigning for – is that we can’t keep putting forward models that look for longer teaching weeks and more hours teaching per week to fund an award.

CCCG, being the largest group in London with a turnover of £121 million with significant reserves, perhaps has more room to manoeuvre than some in the sector.

But rather than blaming payroll costs as the cause of financial problems, colleges should look at how the other 35 per cent of funding is being used.

It is clear at CCCG that millions have been squandered on IT and management information systems that don’t work, on over lavish central management structures and the fool’s gold of the extensive use of outsourcing, agency and consultants.

It is these areas that will be looked at to help fund the staff pay rise. A process of bringing all outsourced work back in-house will also now take place.

‘We need a more fundamental transformation’

Rather than deploying an estates strategy that looks to raise funds by selling off buildings, a strategy based on introducing innovative new models of using buildings to raise revenue will be deployed instead.

For this to work properly we need a more fundamental transformation in the way that college funding is not only sourced, but a longer period of guaranteed funding from the government is essential if colleges are going to be able to plan their futures properly.

It will also mean a new national bargaining framework that ensures every agreement reached is implemented in every college.

The market-led economic and educational principals that drive the sector are ones that have led to the obsessive building up of hugely expensive and wasteful internal bureaucratic structures to measure everything that moves or even blinks in a college.

This has to change. College leaders need to challenge this model as being an outdated one that has proven not to work rather than trying to implement a system that benefits neither the staff nor the student.

The term “the learner” – used to describe those who are being educated – is one that I have always despised. It symbolises one of the worst aspects of this market-driven ethos. The learner as a passive recipient of knowledge.

Teaching and learning is a two-way process. The word student, for me, captures this process more accurately. I look forward to the day that the educational ethos of FE returns to fully grasp an understanding of the role of the student as an educator as well as someone who learns.

The pay award and the fractionalisation agreement the group has also agreed are important steps on the road to ensuring real student-centred learning is established.

UCU members braved the freezing cold, snow and rain to take action to pursue what they believed was a just cause.

The group’s governing body, in approving this deal, has taken a bold step in the right direction and has signalled they have listened. We need others to follow to create a truly collaborative sector.

Of course, this cannot only be done by rearranging the ever-decreasing funding we get from the government. The unity demonstrated during the #LoveOurColleges week is a unity we must build upon.

These times demand that we be audacious with our ideas and actions if the sector is going to be able to rise to the challenges of the future.